On Memorial Day 2016, the non-profit organization The Greatest Generations Foundation took ten WWII veterans back to Normandy, France, to return to the battlefields they fought on, enabling closure of their war experiences. Correspondent Joshua Gates reports.

Joseph Van Eyezeren is continuing his usual humor. “You know how old I am?” he asks under a grey sky hinting at rain. He’s already answering before we can reply. “Forty-seven in this leg and forty-seven in this other one,” he says, using his cane to motion down as he’s effectively cut his age in half via the human anatomy. He chuckles at his own joke.

You learn quickly being around these men, these veterans of the Second World War, that they’ll bait and hook you and before you know it, you are the butt of the joke. Three times now Joseph, or Joe, has got me. A veteran of the US Navy (USS Murphy, DD-603), he retains the same salty talk he likely developed in his youth and perfected in the navy. The previous day, as one of our teammates at The Greatest Generations Foundation raced from the van to the nearest restroom, Joe called him back, feigning that he needed help. He only wanted to be mischievous and delay the guy’s agony.

But that humor is an odd contrast to our surroundings. At first look, the perfectly manicured lawns framed by rolling hills beyond give the sense of entering a park. However, the eye raises to look past this, to row upon row of what look like teeth jutting from the ground, laid in precise rows. This is the cemetery at Bayeux, France and those “teeth” are the graves of British, South African, Scottish, Canadian and many other country’s warriors. Men who died and now rest in this beautiful French town.

We watch as the veterans we’ve brought scan the markers, pacing along the paths between. Those buried may not have been from the same units or country, but they are still comrades-in-arms. 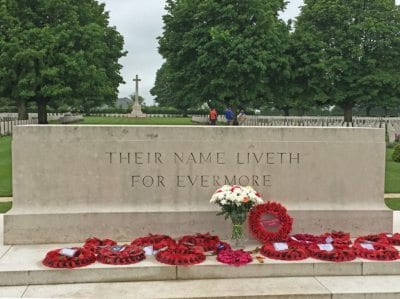 Men who cleared the beachheads of Normandy, gained a foothold and fought into the towns beyond. Towns like Bayeux, where its historic cathedral seems to hang over us in the distance, a sentinel over these buried men. Joe stops and looks at one of the graves. “Boy, I wonder what he would have done with his life?” he asks aloud and to no one in particular. It’s easy to see that Joe is pondering the thought of his own and where it’s taken him.

Earlier, we had visited an elementary school in Carantan. A class of nine and ten year olds had greeted us, eagerly holding lists of questions to ask these men who must seem ancient, almost legend to them. Legend indeed, these children have an understanding of the American’s sacrifice in ways that American children cannot comprehend. It was their grandparents and great-grandparents who, freshly liberated, had welcomed the Americans with open arms. Americans like Eugene Edwards, who shuffles first into the class and takes a seat at the end of a row, facing the children. He fingers the service-hat on his head, a carryover from eight campaigns, adjusting it. The children’s eyes sparkle. Prompted, they stand one at a time and ask their questions in French. When the questions are translated into English and the answers back into French, one eager boy at the front continuously raises his hand. He gets another turn. “What weapons did you carry?” he asks. Emery Horn, veteran of the 242nd Infantry and another prankster in the group answers. “Well, an M1 of course, bazookas, grenades.” The same boy who asked the questions nearly jumps out of his seat at the word bazooka. 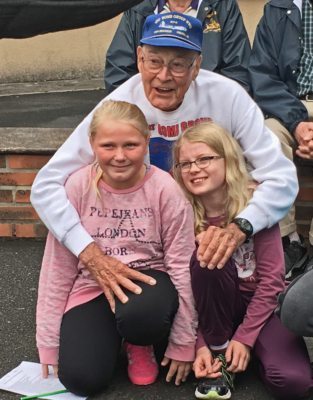 We move outside to take pictures. Darrell Blizzard, formerly of the 381st Bomb Group, kneels down and takes an individual one with two girls. They smile in unison. But it’s time now for the kids to get home except that it has become one of those very rare occasions in school when the children are reluctant to leave. The veterans seem to feel the same way.

We move onto the war museum in town. Tank destroyers and artillery pieces guard the exterior. Inside, the veterans move through static displays of weapons, uniforms and vehicles. These relics were once new to these men, the tools of war they had used in North Africa, Italy and through France and Germany. They wait silently, cold. The war has gone out of them though they still squat menacingly. Richard Manchester, veteran of the 345th Infantry seems reluctant to leave. It’s time though to meet the deputy mayor of the town, who greets them with kind words and gifts. More pictures there and then we’re moving, still more to see. I ask Harold Angle, once a Rifleman, if he’s seen his brother Glen, the former aviator. “Am I on brother watch today?” he asks me sarcastically.

They bait and they hook you, these men. Perhaps a bit slower on their feet than they once had been, but no less quick with the wit.

Joshua Gates (U.S. Marines, Combat Veteran) is a 10 year veteran of the Marine Corps. Joshua conducted special operations and intelligence work in joint environments on four continents, which included time served in Kosovo, Iraq and Afghanistan. He has also worked in humanitarian relief to areas such as Mozambique and Northern Africa. Joshua is a documentary and narrative filmmaker and his fictional work has been published in literary journals and fiction collections.