On Monday, May 30, 2016, Memorial Day, the non-profit organization The Greatest Generations Foundation took ten WWII veterans back to Normandy, France, to return to the battlefields they fought on, enabling closure of their war experiences. Among those heroes is veteran Joseph Van Eyzeren (USS Murphy, DD-603). This is his story. 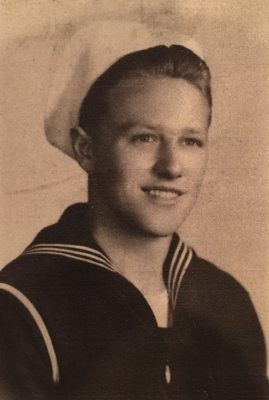 Like the proverbial swan, calm on the surface but paddling like hell underneath, so is the United States Sailing Man of the Second World War. When you talk with Joseph Van Eyezeren, you realize you are talking to a man who sounds collected mentally, despite being in his late nineties, who still retains the sharp wit of the sailor. It’s easy to picture him on his old ship, DD-603, the USS Murphy, slinging cuss words as he manned the engine room, laughing with the Murph’ Family as they watched swells through a break in the ship’s armor plating. But like the swan, it becomes apparent that there is a brain that at once organizes and assesses, while paddling like crazy underneath it all, able to take on a multitude of tasks that would make a younger person quit. And make no mistake, Joseph is not someone who knows the word quit.

Joe served in the U.S. Navy from 1942 through 1945. As a Marine who has served in conflict zones across the globe, I haven’t seen half as much as he did during a shorter time served. But the Marine-Navy family is strong, and I immediately felt a sense of kinship with this man despite the span of time and different wars that separated us. Then, at a key moment, as he described how a ship in the convoy he was attached to accidentally rammed through the fire-room of the Murphy, I too felt the terror that men of the sea share: that horror at knowing shipmates were dying along with the bow of a ship that had seen action on numerous fronts. I remembered the berthing I’d been in on ships, resting behind water-tight doors and the thought of that cold ocean opening into the metal made by the hands of man and taking that same man away. On 21 October, 1943, Joe witnessed this first hand, the oil-tanker Bulkoil cleaving through thirty-eight sailors, some of them his friends. In war, it isn’t always the enemy that comes to claim your life. In war, circumstance and coincidence come hunting for the same.

Such was life in the days when Nazi U-Boats, the notorious wolf-packs, hunted convoys that Joe and the Murph’ Family defended, crossing the great expanse of the Atlantic on high-speed, shaking-hands-with-the-devil runs. And such was his life aboard ship, each crossing perilous and each one further building his already strong character.

During time off the coast of Northern Africa, Joe manned the engine room, the heat of the boilers matched and doubled by the hot African sun, sweating as he answered bells, adding fuel that kept the Murph’ moving, listening to the reverberations of attacking Axis aircraft. At Normandy, he manned battle stations as Murphy provided fire support and screening movements to both their fellow ships and men ashore. Night brought German glider-bombs, hunting for blood, their sole defense often being a jamming antenna atop the Murphy’s stack.

Later, Joe once again found himself part of history as the USS Murphy was tasked with escorting a ship carrying the President of the United States and more. He also had the honor of carrying the King of Saudi Arabia along for the same trip. Joe speaks of the canvas tents the King brought along, stretched between guns, bodyguards from each tribe watching over him as he argued about bringing his concubines aboard; the King and his entourage feeding off livestock brought on deck for the occasion, and native pilots, their bare-feet smoldering on the hot deck as they helped the crew navigate shoals and rock outcroppings through the Suez Canal.

Then, in another strange twist that only war can manifest, Joe and his shipmates found themselves in another ocean, in another world away, and in another theater of that larger World War. To the Pacific and Japan, where the Murphy swept for mines off the coast of that island empire. Thirty days after America dropped nuclear ordnance over Nagasaki, he found himself walking through the ruins, past Japanese citizens who would not look him in the eye, their gaze as hollow as the city that had once stood in that grim place.

Joe’s face is etched with lines that have seen these things and more, eyes that have surveyed dials in the engine room of a historic ship, gazed across the expanse of ocean and over foreign lands and war. But it is also lined with memory of his homecoming, when he met a daughter, born on D-Day while he watched the invasion of Europe, and she being two years old upon their first contact with one another. More lines there, carved with the smile of his daughter’s words: “Mommy, who is this man in your bed”.

Since the war, that mind has continued to paddle, running trucking and taxi businesses, learning to fly a multitude of aircraft and traveling the world no longer on the sea but in the air. And most importantly, running the Murph’ Family and active with the Tin Can Sailors Association. That link is strong and is what ties veterans of all ages together, united in the fire of war and the type of brotherhood that only war can bring. Soon, with the help of The Greatest Generations Foundation, Joseph will be making that crossing to Europe again, to stand on the soil of a country he once fought to liberate. And like the proverbial swan, he will most likely be calm on the surface, but that brilliant and sharp mind will be paddling like hell underneath it all.

Joshua Gates (U.S. Marines, Combat Veteran) is a Senior Correspondent for Lima Charlie News. A 10 year veteran of the Marine Corps, Joshua conducted special operations and intelligence work in joint environments on four continents, which included time served in Kosovo, Iraq and Afghanistan. He has also worked in humanitarian relief to areas such as Mozambique and Northern Africa. Joshua is a documentary and narrative filmmaker and his fictional work has been published in literary journals and fiction collections. Follow Joshua on Twitter @JoshuaGatesLC