Wide Islamic State offensive on Deir Ezzor, Syria, splits the town in two, isolates a small detachment of protectors, preventing supply drops. With the military air base disabled and under constant attacks, only a miniscule number are left to defend against the Islamic State’s fiercest offensive in years.

Deir Ezzor (Deir ez-Zor), Syria – As the battle rages, shells hit covering the Syrian Arab Army soldiers in course dirt. They duck and cover behind heaps of rubble that was once the city cemetery. The remains of bodies, new and old, lay everywhere.

At the outer perimeter of a cemetery that has become their home, defenders prepare for the onslaught of Islamic State fighters. The soldiers of Deir Ezzor have only two safe havens left inside the devastated city, the cemetery, and the hospital. Both are under siege by a numerically larger enemy with nothing to lose. Nearby military bases just outside of the city are not able to deploy reinforcements due to constant attacks.

Rounds fired from across the street, out of burnt out hulls of buildings that used to be apartment buildings. The soldiers respond in kind.

Over their heads a Russian Air Force attack helicopter comes in hot – firing fierce high explosive rounds into the buildings with its autocannon – responding to the constant cry over the radio for additional support.

The embattled soldiers have had to conduct “tactical retreats” for a week now. They have lost every safe haven they had. Once they found themselves at the cemetery, they realized there was nowhere left to run. ISIS had taken the ground behind them. Stone structures and buildings inside the cemetery perimeter would become their camp, where they would prepare for a stand. Will this become their Alamo? Will this stand inside the cemetery walls be their last?

Reports indicate that the ISIS offensive in Deir Ezzor has brought them success against the local government affiliated soldiers and militia groups, but in the process, the Jihadist group has lost hundreds, with many more becoming ‘battle disabled’. In just 4 days, ISIS is said to have lost 200 of their fighters that took part in the offensive. The SAA is said to have lost 78 of its soldiers during that same timeframe, and regional militias that sided with the Army are refusing to report casualty ratings.

The greater city of Deir Ezzor has over 250,000 residents. The ISIS counteroffensive has largely gone unreported by international news out of fear of providing ISIS with a PSYOPS and propaganda victory. On January 17, the phone networks around Deir Ezzor were largely closed down by ISIS after they began blowing up the 3G antennas. Citizens rely on 2G/Edge antennas still under Syrian government control miles outside of the city, but reports have surfaced that those inside ISIS controlled areas of the city found to be tweeting are executed immediately. One citizen inside the warzone stated in a Telegram message that “you can see the fear in people’s eyes.”

The total strength of the ISIS force remains unknown, but the Syrian state operated news agency SANA, has stated it consists of Saudi, Tunisian, Syrian, Iraqi, and many other nationalities. Reports from citizens inside the city, as well as the casualty numbers and progress made by the force, indicate that the number is notable. 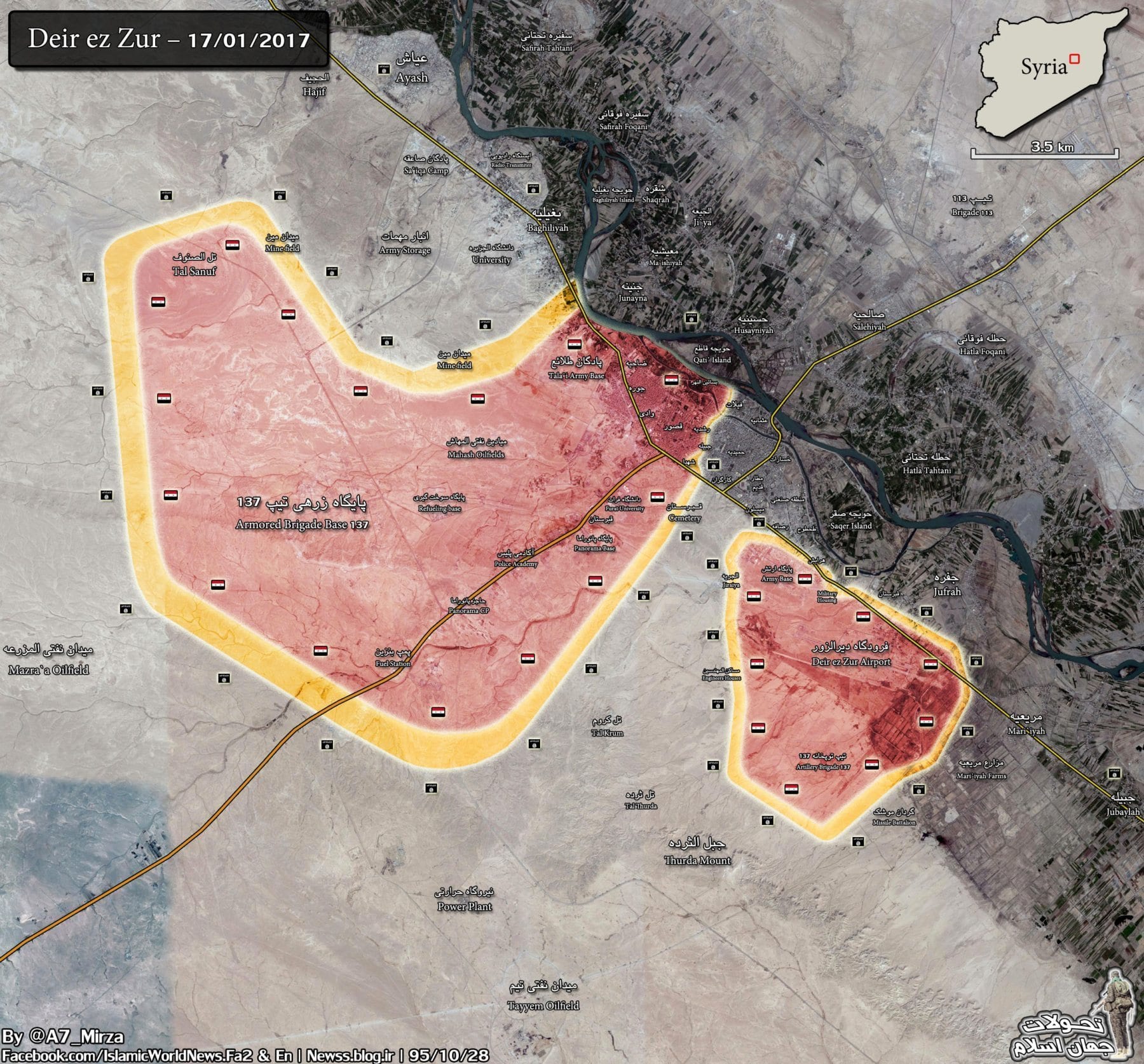 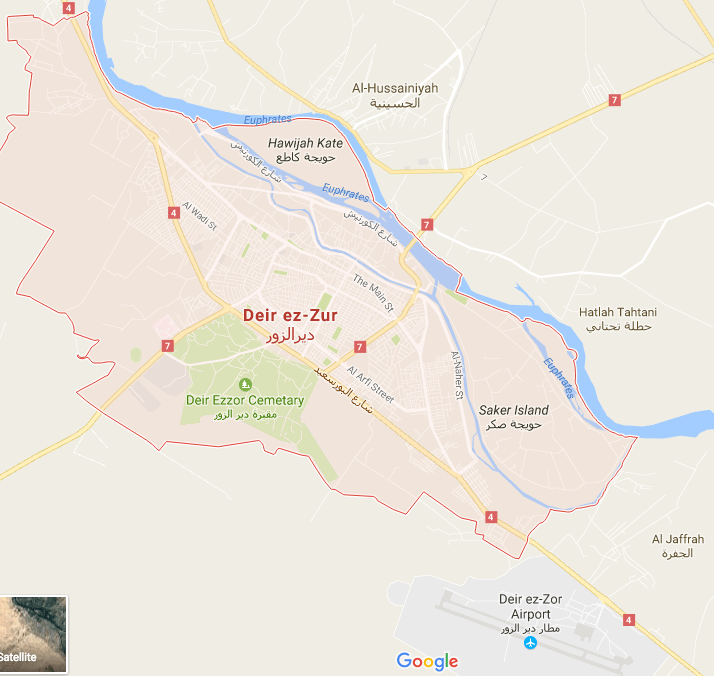 The onslaught from ISIS has resulted in the near complete encirclement of the strategically vital Deir Ezzor Airport and Airbase, which remains controlled by Syrian government troops. Constant shelling and waves of attacks have damaged the base to a point where it is no longer able to viably operate as a launching platform for Syrian and Russian air assets. It rather operates as a coordination center for air sorties coming in from airbases further away. Due to the deployment of shoulder fired ground-to-air missile systems by ISIS, the government air force has cut off air drops of supplies over the airbase, out of fear it would result in severe casualties. Next to the Airport and Airbase is the SAA 137 Artillery Brigade Base, which remains under Syrian Government control. Indicators are that ISIS is preparing for an advance on the base to overrun it within hours.

Between January 15th and 18th the Syrian Air Force conducted 40 air strikes against known ISIS held buildings, directed by the remaining soldiers on the ground. On January 16th, Syrian troops took control of the al Assad hospital despite an intense ISIS defense. The hospital compound has since been near continuously shelled by ISIS forces in the hills and structures around the area. The hospital and cemetery remain the two enclaves inside the city center that are under government control.

By January 17th, the clashes between government forces and the jihadist group forced the immediate end to resupply drops of both aid and ammunition. The drop zones had become unsustainable to hold for the troops, even with heavy air support flying low in an attempt to protect the troops, despite the danger of being shot down by ISIS anti-aircraft systems. The anti-aircraft systems deployed by ISIS are believed to be modern and efficient, captured from Russian and Syrian installations in the recent weeks, including the Russian Special Forces base outside of Palmyra. Reports of helicopters coming back to their air base in nearly disabled shape are numerous.

We have put on hold the air drop operation in Deir Ezzor for security operational reasons. There is heavy fighting ongoing in and around the landing zone … It is simply too dangerous to do this now.

Since April of 2016, the World Food Program has dispatched over 3,300 metric tonnes of food and other aid to the city. For weeks their operations have been entirely dependent on air drops.

During the night between January 17th and the 18th, ISIS forces attacked the al Ommal area of the city, nearly entirely splitting the government enclaves in two, severely disrupting the last logistical lines between them. On the morning of the 18th, the SAA responded by launching an all out coordinated counter offensive to try to create a buffer zone between their enclaves and ISIS aggressors. The offensive is critical to create safe resupply drop zones for the Russian and Syrian Air Force to be able to drop both military supplies as well as humanitarian aid.

Following reports of #ISIL attacks, @UN deeply concerned for the safety & protection of some 100,000 people in besieged #DeirezZor #Syria

At the time of this writing, reports indicate that the counteroffensive is meeting fierce resistance. Suicide bombers rush against remaining soldiers, anti-aircraft cannons are being used against Syrian troops, and an enemy that lives to die in battle has converged on the besieged city.

Yet again, the combined efforts of the Russian and Syrian air forces provide watch and protection for soldiers on the ground, but the close quarter battle on the streets means that aircrews find it difficult, if not impossible, to fully unleash their machines’ full capability. The battle will come down to the individual soldier.

If the counteroffensive fails, the city might fall entirely. If that happens, ISIS has already stated that it intends to execute all that supported government forces or did not join them in the fight to take the city.

Follow Lima Charlie News for updates on this developing story.