ISIS may have obtained a high altitude Russian surface-to-air missile system after recapturing the ancient city of Palmyra, Syria.

Palmyra, Syria – ISIS has released a video of the recently captured Russian special operations base outside of Palmyra, Syria, showing a treasure trove of weaponry, armor, ammunition, and various equipment left behind by retreating Russian and Syrian forces. While the Russian Ministry of Defense has not commented as to how long the captured Russian base had been abandoned, the video infers a hasty retreat, showing as well scattered living quarters and a mess hall with bowls of half eaten food.

Media posted by the IS-affiliated news agency al Amaq, shows that their offensive in the area appears to have resulted in the capture of a Syrian fire base to the west of Palmyra. The base is believed to be just north of the government-held Tiyas air base, and part of its outer security perimeter. Various images show abandoned artillery pieces, machine guns and what appears to be an S-125 surface-to-air missile system and its associated targeting and tracking systems.

The S-125, also known by its NATO name as the SA-3, is a Soviet-era rail-based surface-to-air missile system that can hit targets flying at approximately 60,000 feet, and has a maximum effective range of 17 miles, according to public U.S. military documents. If properly deployed it can pose a serious threat to any air assets operating in the area. However, it is considered an advanced system and complicated to operate without proper training. It also possesses a large and visible footprint that make it easy to find, and target. 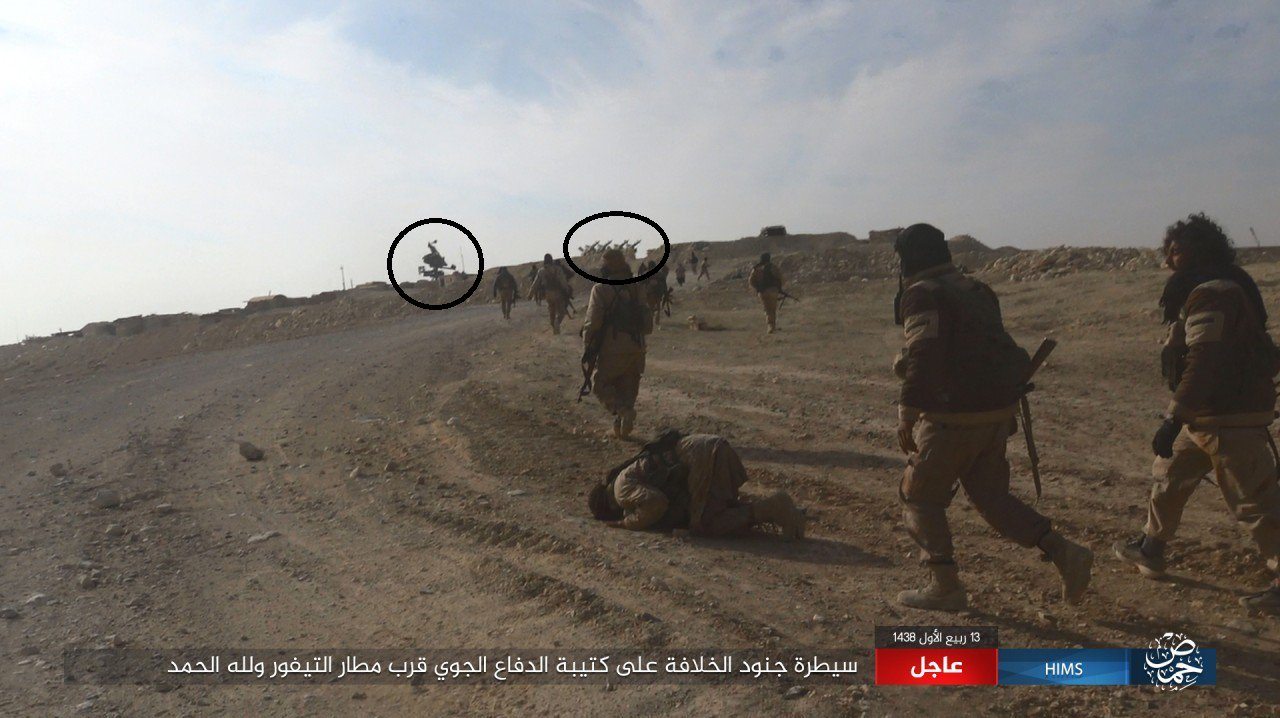 Previous videos from the base revealed Russian military trucks with PANTSIR S-1 surface-to-air missile systems mounted on them. While the presence of PANTSIR S-1 systems is not visible from the ISIS video, ISIS may prefer not to disclose its access to the high efficiency surface-to-air missile systems until deployment of the weaponry on the battlefield.

The recent ISIS counter offensive that began last week broke the Syrian line around Palmyra, forcing evacuation of the Russian base as the safety of troops stationed there could not be guaranteed.

al Amaq claimed in their coverage of the base capture that the group seized upwards of 20 tanks, a handful of armored personnel carriers, howitzers and antitank guided missiles. Analysts believe that the claims may have been fabricated for propaganda purposes, but given the speed of the offensive, it is likely the group has accumulated some material.

The video appears to be heavily edited, and certainly designed to show a larger than factual debacle by coalition forces. Scenes appear edited in a fashion designed to appear as if large stores of ammunition, small arms, heavy machine guns and damaged antiaircraft guns were all left behind. Upon careful review, the same boxes of weaponry appear on multiple occasions in different angles, slightly moved as to show that there were more weapons captured. Another segment of the video appears to show an antiaircraft gun of questionable operational status, but close inspection raises doubt as to its authenticity.

The U.S. has voiced concern about the weapons seizure and possible implications, indicating it may seek to destroy the weapons if Russia does not. At a Pentagon briefing Wednesday, U.S. Army Lt. Gen. Stephen Townsend stated, “it’s complicating our life a little bit because they — ISIL’s managed to get their hands on some equipment there. We’re watching that, and as soon as we have an opportunity, if the Russians (inaudible), we will.” Townsend added, “I think Russia will probably take action. If they don’t, we will do what we need to do to defend ourselves and we’ll coordinate … probably, we will strike it if we see it moving away from Palmyra.”

Russia has downplayed the losses. Russian Defense Ministry spokesman Maj. Gen. Igor Konashenkov said Thursday that an “insignificant number” of firearms and a few broken pieces of military hardware left in Palmyra “pose no threat to the international coalition.” 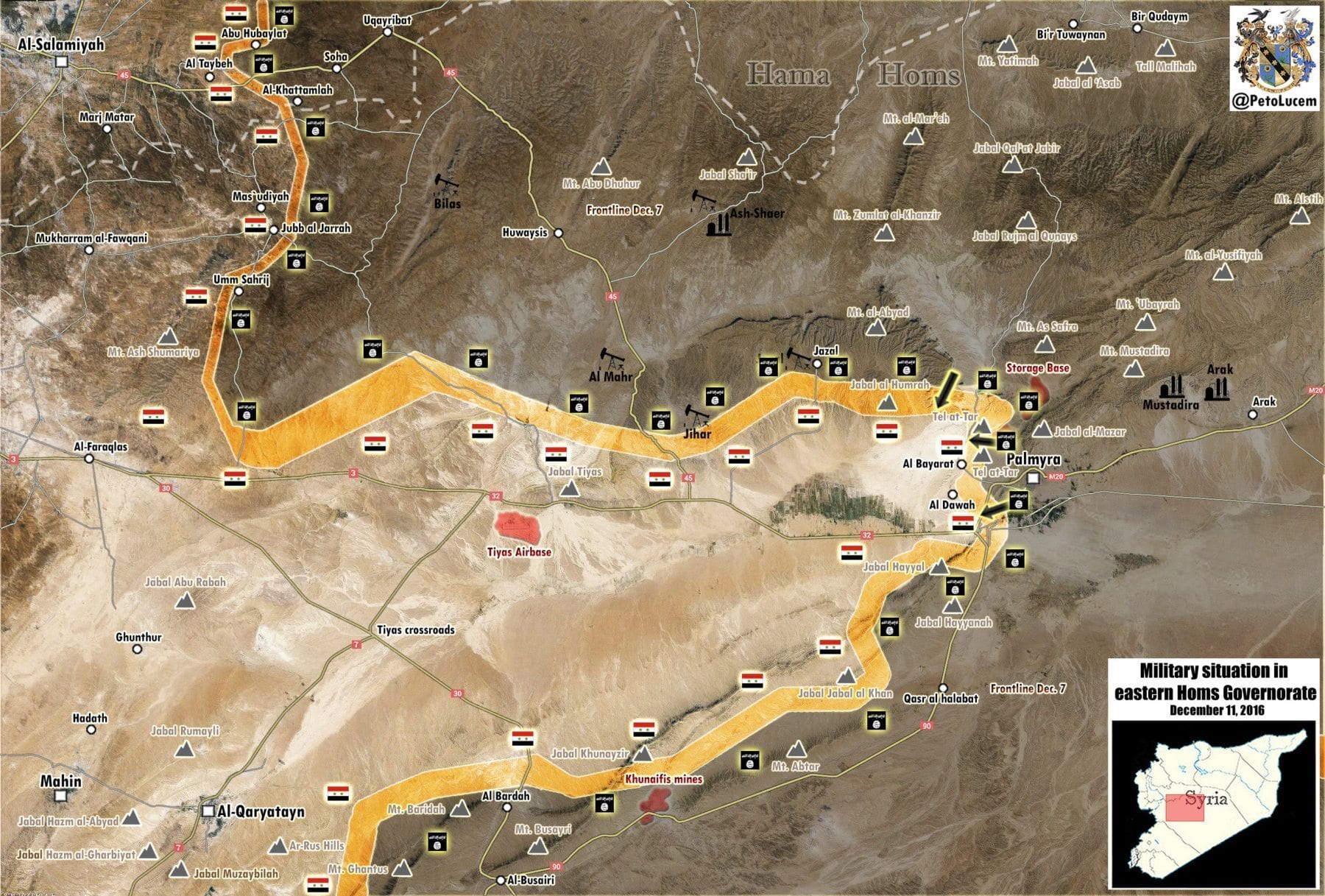 The ISIS conquest of Palmyra, and the Russian base along with it, appears to be a direct result of the Aleppo offensive, where Syria has been forced to divert battle ready troops en masse to the frontlines of the city rather than ensure the security of installations and previously captured ground. As the Aleppo offensive has seemingly been a success for the Syrian regime, troops may soon be diverted back to recapture Palmyra. However, by the time they do so, the weaponry and equipment captured by ISIS will certainly be gone.

Home to the world-renowned archeological site, the ancient city of Palmyra was captured by ISIS in early 2014, and the world witnessed the vast destruction of its rich cultural and historical heritage during the years the group held the city. Syrian government forces, Iranian-backed militias, and Russian special operations troops retook the city amidst fierce battles earlier this year. It was touted by the Russians as a great victory, evidence that the Russian-Syrian alliance had finally broken the group’s back. In May, 2016, a Russian symphony orchestra was flown in for a live concert amidst the ruins.

During its 2014 campaign against Syrian military installations, ISIS was able to capture several air-to-air missiles and missile systems. When the group captured the Tabqa Air Base, the group is believed to have gained access to a large supply of so called MANPADS, which is a shoulder-mounted surface-to-air missile system. Reportedly the group has seen little use of these captured systems, with only a handful of MANPAD attacks having been carried out. The group has used captured missiles that they have not been able to utilize for their intended purpose to build vehicle borne improvised explosive devices (VBIEDs) and improvised explosive devices (IEDs).

These recent ISIS attacks have threatened the security of nearby Tiyas Air Base, west of Palmyra, known as the T4 Air Base, home to Russian helicopter gunships and Syrian Arab Air Force aircraft. Reportedly, the Syrian Arab Army’s 800th Regiment of the Republican Guard’s paratrooper division was deployed to the western countryside of Palmyra on Thursday morning. At present the base operates as an important resupply point for the Syrian air and ground campaign, and a disruption of operations there could pose a serious problem for counter-ISIS operations in Syria.