Update on the battle against ISIS in Syria: combined Russian, Syrian and US air assets pound Islamic State militants in defense of a small force on the ground in the besieged city of Deir Ezzor.

Deir Ezzor (Deir ez-Zor), Syria – The past few days have been hard on Syrian Arab Army troops. The past few weeks have been worse. As reported by Lima Charlie News, a few days ago, the remaining men aligned with SAA launched an offensive. Local militia groups joined in. If the offensive had been a disaster, it would have spelled death for the men, and ruin for what remains of the Syrian city of Dier Ezzor.

The offensive was not a failure.

But it was certainly not a success.

The offensive began with attempts to create a buffer in the city’s cemetery. The secondary stage was to reestablish the line between the government held al Assad hospital and the cemetery. The third stage was to attempt to reach the airport and airbase.

SAA troops were able to take ground around the cemetery, and along surrounding hills, much to the aid of heavy air support from Syria, Russia, and US, air forces. The Islamic State still holds the ground around them, and is largely in control of the logistical line between the cemetery and the hospital.

The airport and airbase continue to receive near constant fire barrages from the surrounding hills. Small but precise mortars are transported on the back of pick up trucks. The enemy fires off three rounds in short order, then relocates to fire again.

ISIS pickup trucks often have MANPAD systems ready to engage any helicopters or planes that come to respond to rounds fired from the last position. The number of pickup trucks, the number of combatants, and their coordinated efforts, are creating a dangerous anti-aircraft triangle, where Russian and Syrian helicopters are ill advised to fly. Those that venture to respond to a mortar attack might be met by multiple state of the art shoulder-launched surface-to-air missiles (SLSAMs) quickly zeroing in on their target.

The US has deployed high altitude bombers and drones to the area, and are hitting targets as they find them, often intercepting through SIGINT capabilities midair the call for aid from Syrian Government forces, and responding without warning to anyone on the ground. Russian and Syrian helicopters and warplanes fly around the clock, protecting troops from above, conducting the all essential overwatch. Without this close quarter aerial support the troops would loose their positions within hours. 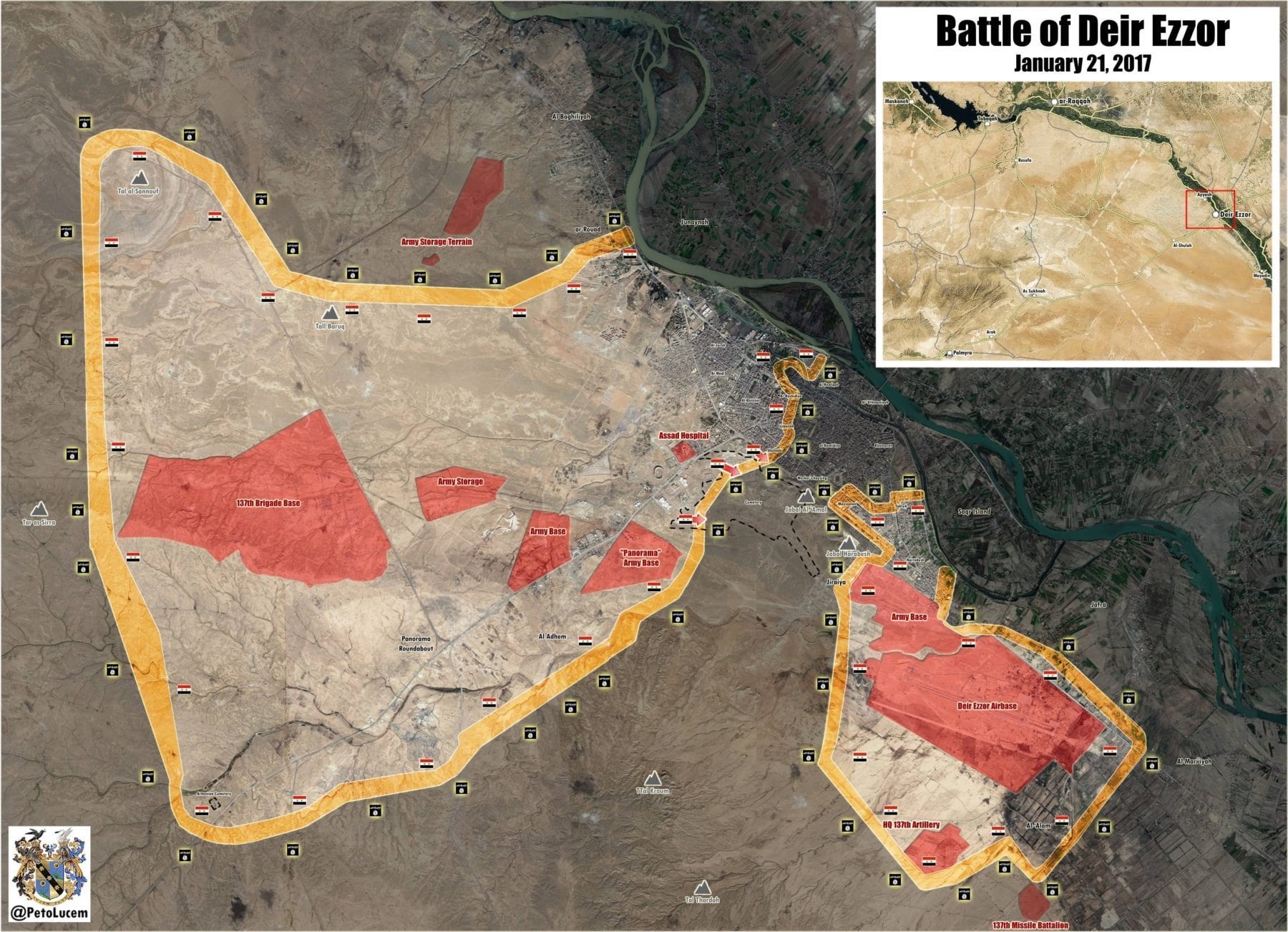 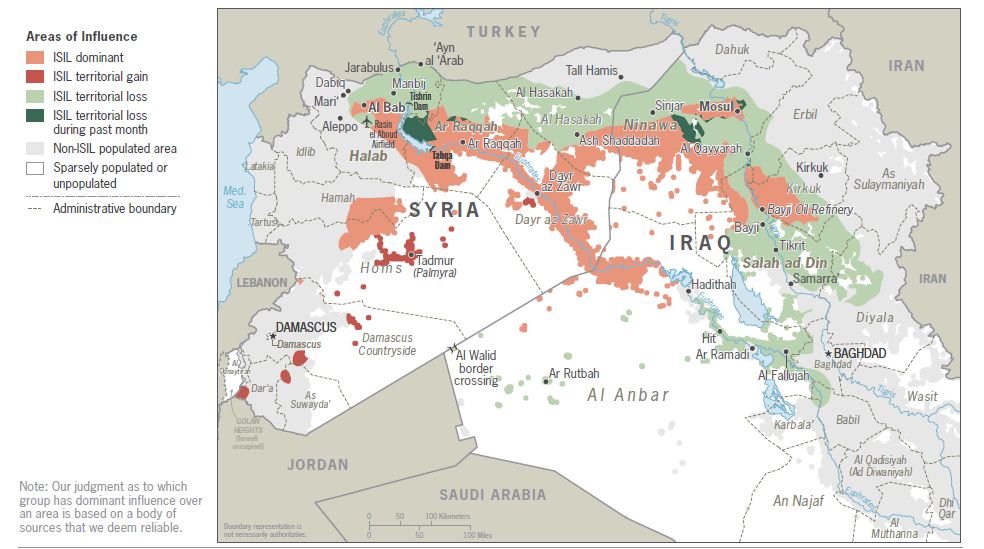 While Russian and Syrian aerial responses are coordinated from Damascus based on radio calls from entrenched men on the frontline, the American response is coordinated through US military installations around the region and stateside. Although men on the ground know there is a disconnect, calls for support do receive a needed answer, which for them is all that matters. Appearing as angels in answer to a prayer, air assets are a welcome sight to these men on the ground. It is during these times, pitted in a battle against an enemy destined to kill, politics becomes utterly irrelevant.

Military air supply drops have reportedly begun taking place again over the cemetery and airbase grounds, but only from high altitude, and with varying degrees of precision. The transport planes are too slow and too exposed to come in low for a precision low altitude drop.

The airbase remains under siege, but has been able to fend for itself – barely. Syrian military sources indicate that the airbase has been building up an offensive force within its walls, stockpiling weapons, in preparation for a fierce battle either inside the airbase perimeter or by having to take the battle to the enemy. Sources say that within 24 hours airbase personnel will take the fight to the enemy. High casualty and collateral numbers on both sides are expected.
At the same time, reports from sources within Islamic State and Syrian Military Intelligence indicate that ISIS is preparing for a renewed coordinated multi-front offensive against the airbase, and the cemetery.

Just before 1400 hours on January 22nd ISIS forces had advanced using ground forces and technicals equipped with ground-to-air weaponry on the Panorama Roundabout in central Deir Ezzor. The roundabout is vital for ground logistical support between Syrian Arab Army enclaves. In response to the ISIS offensive, SAA ground forces advanced despite heavy fire on the roundabout.

The Syrian Air Force quickly deployed several helicopters to support the counteroffensive. Shortly after 1400 hours, reports from the ground are that Syrian Air Force helicopters were coming in low and hot over the city, firing high explosive rounds from their autocannons, as they approached the hot zone. Early reports of one helicopter having been hit by ground-to-air ISIS fire remains unconfirmed, but is not unlikely.

Our #SAA heroes who are fighting terrorism on behalf of the world.
From #DeirEzZor today 17.01.2017
Support them & pray 4 them#SAA_Salute pic.twitter.com/R8xrqfwNkl

Unconfirmed reports have circulated that a US warplane engaged ground targets inside ISIS lines to disrupt traveling reinforcements to reach the extremists. If this is the case, the order to engage ground targets was not cleared by Damascus military command – but was undertaken by the US Air Force based on CENTCOM orders as part of the US led Operation Inherent Resolve. The ISIS offensive lasted for 40 minutes amidst the air and ground counteroffensive, and in the battle two of the deployed technicals were engaged and destroyed by Syrian helicopters coming in from the east. The number of ISIS fighters killed or wounded in the offensive remains unclear.

If the roundabout would have fallen to the Islamic State, the ground logistical lines in the city would have been completely under ISIS control. Had that occurred, remaining Syrian Arab Army forces inside the city would have found themselves forced to fight with severely limited resources, or commit to another tactical retreat. A retreat would take forces out of the city area, leaving the city in the hands of ISIS.

ISIS is losing the war. But the battle for Deir Ezzor remains undecided.

Follow Lima Charlie News for updates on this developing story.

Soldiers battle in last stand against ISIS at Deir Ezzor