Who exactly is Evan McMullin?

A new contender to the U.S. presidential race made a surprise appearance in poll results from Utah.

An October 10-11 Deseret News poll of likely Utah voters had independent candidate Evan McMullin polling at 22% – 8 points over Libertarian Gary Johnson, and within arms reach (with the poll’s 4.4% margin of error) of Democrat Hillary Clinton and Republican Donald Trump. Both Trump and Clinton are tied with 26%.

In a more recent Deseret News poll, McMullin edged ahead of Clinton, but is trailing Trump by one point, creating a virtual three way tie, polling at 28%, 29%, and 27%, respectively. 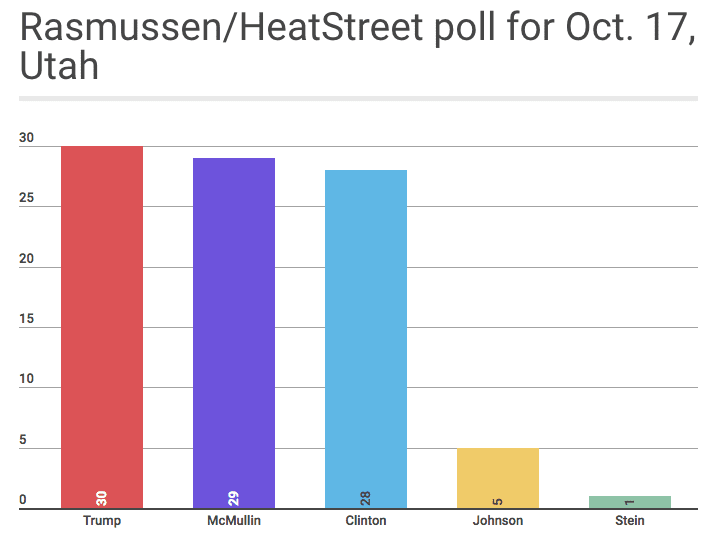 But who exactly is Evan McMullin?

According to his campaign website, McMullin stands for a mix of centrist and conservative positions, including support for the Second Amendment, securing the border combined with comprehensive immigration reform, and strong national defense. A graduate of Brigham Young University and The Wharton School at the University of Pennsylvania, McMullin’s previous experience with public service includes a stint as a Central Intelligence Agency operative, and as a staffer on the House Committee on Foreign Affairs. Prior to that, according to his website, he was a Mormon missionary in Brazil, and a “Volunteer Refugee Resettlement Officer” in Amman, Jordan on behalf of the United Nations High Commissioner for Refugees. McMullin also worked in investment banking with Goldman Sachs.

McMullin announced his run on August 8, 2016, naming running mate, Mindy Finn, on October 6th. In his announcement he stated, “Hillary Clinton is a corrupt career politician who has recklessly handled classified information in an attempt to avoid accountability and put American lives at risk, including those of my former colleagues,” while Donald Trump “appeals to the worst fears of Americans at a time we need unity, not division … Republicans are deeply divided by a man who is perilously close to gaining the most powerful position in the world, and many rightly see him as a real threat to our republic.”

Recently, Republican leaders from the state of Utah, including Governor Gary Herbert, rescinded their endorsement of Trump after accusations of sexual assault surfaced. Some went as far as asking the Republican nominee to step down.

Few however, have offered their endorsement of McMullin.

Wayne Neiderhauser (R-UT-9), the President of the Senate for the Utah state legislature, wrote in a recent email to Lima Charlie News, “Mr. McMullin seems to be a good candidate with conservative values. His chances of winning the Presidency are remote. Currently, I have not endorsed him or any candidate for president. I am still evaluating the options and considering where to cast my vote based on my conservative values.”

Greg Bell, a former Lieutenant Governor of Utah, offered his endorsement of McMullin during a recent interview. “Without hesitation, I’m endorsing Evan McMullin for President. This guy oozed character. His understanding of policy is mind-blowing. His experience with the CIA was impressive. Evan has such a feeling for how to bring people together and how to do it in a constitutional way. He has and will present a character based campaign and administration.”

McMullin quickly gained popularity in the state after announcing his candidacy. The high dissatisfaction rates of Clinton and Trump in Utah, and the lack of overwhelming support for other party candidates, helped provide space for McMullin’s rise.

Pence said conservative voters should “come home” to Trump, but that’s ridiculous because conservatives can never be at home with Trump.

“McMullin gained a lot of name recognition in Utah through the news and through his campaigning, but had absolutely no name recognition before that,” said Richard Davis, the Director of Civic Engagement and Political Science Professor at Brigham Young University in Provo, Utah.

When asked about the overall presidential political picture in Utah, Professor Davis added, “Donald – is Donald Trump. A lot of Utah voters are turned off by Donald Trump. And faced with the prospect of voting for Clinton, McMullin seems like a fair alternative.”

The likelihood of McMullin winning even Utah is a long shot, but growing. McMullin’s campaign website acknowledges his slim chance and notes their primary goal is “to prevent either major-party candidate from reaching 270 electoral votes”.

That scenario may seem unprecedented, but it has happened before. While McMullin is unlikely to win such a vote in the House of Representatives, his candidacy and its unexpected rise in Utah show the relative weakness of the Republican Party’s nominee, in what is traditionally a conservative state.

Joe Stone is an Army combat veteran having served tours in Guantanamo Bay, Egypt, and Afghanistan, as well as two tours in Iraq. After 15 years of service, Joe was medically discharged from the Army, returning to his home in Washington State. There Joe focused on his reintegration into civilian life through extensive civic engagement and veteran outreach, focusing as well on volunteering with local community groups and writing.