| Dhaka‬, Bangladesh (Lima Charlie News) – #Dhaka‬, #‎Bangladesh: at 1925(~)ZULU+2 JUL1 reports of gunfire were reported across the news wires. Local chatter indicated that the gunfire was occurring in the diplomatic area of #Dhaka, Bangladesh. 5 minutes later, the area of the fire exchange was narrowed down to #‎Gulshan‬, a prominent area of the capital. The location is Holey Artisan bakery and operates from the same building at Road-79 in Gulshan 2.

“According to intelligence gathered by our correspondent at spot, about five assailants entered one Holey Artisan Bakery restaurant on Road 79 and opened gunfire around 9:20pm.
Huge number of policemen and Rapid Action Battalion (Rab) members cordoned off the restaurant. Assailants were hurling bombs when this report was filed around 10:46pm.
Several people including policemen are believed to have been shot at scene. Televisions were covering the incident live and showed some people shot.”

At 1938(~) ZULU+2 JUL1 The OSINT indicated that a number of foreign nationals were trapped in the area.

Local News reported that : “Sumon Reza, a kitchen staff of Holey Artisan Bakery, who managed to escape said several armed assailants entered the restaurant around 8:45pm and took the chief chef hostage.
“They blasted several crude bombs causing wide-scale panic among everyone. I managed to flee during this confusion,” he said.”

And as such, at 1939(~) ZULU+2 JUL1 following OSINT indicated that 3 people were shot at 2230 local event time. 2 being police personnel. According to OSINT received, local police were confirming and stating accordingly.

1940(~) ZULU+2 JUL1 the BBC editor for the area, South Asia editor Jill McGivering, stated that while attacks involving weapons were rare in Bangladesh – a recent spike in homicides were being blamed on “Islamist extremists.” Having said that, it is not clear who or what is behind this attack. At this stage (writing as if present) we do not know if it is an organized attack of a wider scope even. We do know that the cafe that is involved in this attack is popular with diplomats, the middle-class “western oriented” people, and expatriates however. At this stage we also “know” that, reportedly, the individuals that intruded into the cafe shouted “Allahu Akbar”. And that the US embassy in Dhaka tweeted that there were “reports of shooting and hostage situation”.

1942(~) ZULU+2 JUL1 The police are gathering outside/in the area according to OSINT. No activity. There is no clear indicator of who is behind the attack.

1943(~) ZULU+2 JUL1 Reports have it that the Government is requesting a halt in live feeds etc of broadcast for security purposes. Also a public announcement across media that they want to talk with those inside the restaurant, including the gunmen. Police Special Operations units, Rapid Action Battalion(RAB), are being deployed and taking charge according to wire. 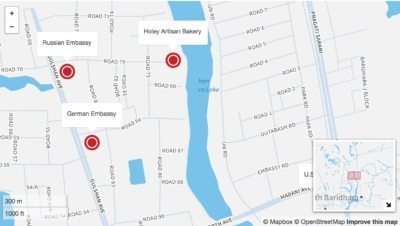 1959(~) ZULU+2 JUL1 OSINT Indian NDTV reporting 2 diplomats killed – this has NOT been confirmed locally or anywhere else.

2004(~) ZULU+2 JUL1 OSINT There are reports of 2 people dead and 15 injured. As of yet, these are unconfirmed. Officer in charge of Banani Police station in Dhaka has succumbed to his injuries. Confirmed by local TV channel.

2008(~) ZULU+2 JUL1 OSINT Lori Ann Walsh Imdad, principal of American Standard School, wrote on her Facebook page: “Terrorists broke in and shot the Italian baker and his wife and took about 20 foreigners hostage. This is a block from my place so I have a front row seat to the police action.”

2012(~) ZULU+2 JUL1 OF—— 7 attackers in total. They have separated locals and foreigners, left side of building foreigners, right side locals. Left side has explosives.

2032 ZULU+2 JUL1 Police and special forces are sealing off the area. Media is asked to leave.

2033 ZULU+2 JUL1 The United States Embassy has confirmed that all of its staff in the area are safe and well.

2040 ZULU+2 JUL1 Dhaka Tribune have stated that “So far, more than 24 police members have susteained injuries.”

2059 ZULU+2 JUL1 Individuals held hostage identified as Italian(3), Banglades(4), Argentinia(1), There are claims that there are 24 dead – This is unconfirmed at this time. The two confirmed dead are first responders K.I.A.; 30 of the injuries are police.

#Dhaka At 0820 ZULU+6 JUL2, 10+ people have been rescued frmo the hostage situation inside the restaurant, including a foreigner says Mizanur Rahman, assistant director of RAB (legal and media wing) . They are being taken to a hospital. About 15 minutes earlier an large RAB Quick Response Force unit had entered the perimeter, and an intense gunfight had begun. This according to an interview given by Mizanur Rahman Bhuiyan, a deputy director at the Rapid Action Battalion force, to Reuters.

RAB had contact throughout the ordeal with one of the men being held hostage through a cellphone. The whole series of event took 11 plus hours.

Police reported 2 police officers(some reports say 4 however) have been killed and at least 20 people wounded, some seriously. The Amaq news agency, which is linked to the militants, claimed more than 20 people were killed in the attack. Authorities deny that report. The exact number of casualties has not been confirmed. The attackers are believed to have been killed in the RAB insertion into the restaurant.

While the attackers themselves have not directly claimed affiliation with ISIS, ISIS has claimed responsibility for the attack. The identity of the attackers is not yet fully known.

#Dhaka 0930 ZULU+6 JUL2 (AP wire) “The sound of two big explosions has been heard from inside the Dhaka restaurant where security forces battled militants holding dozens of hostages, and a police official says five bodies were seen lying in pools of blood.

In Tokyo, Deputy Chief Cabinet Secretary Koichi Hagiuda says 12 people were rescued in the raid, including two foreigners, but he couldn’t say if they were Japanese.

About 35 people were taken hostage, including about 20 foreigners. ”

0623 ZULU+2 JUL2 – #Dhaka Quick point: Several different Islamic Extremist groups are claiming responsibility for the attack, including ISIS. And at this time, none of these claims have any conclusive evidence, and local authorities have not confirmed/stated any strong ties to either. The attackers have not made any public claims to belonging to any particular group so far.

ISIS affiliated online accounts did publish photos that were allegedly from the inside of the restaurant. Showing bodies etc. However, these photos are not confirmed as belonging to the incident, nor are they in any shape or form conclusive evidence.

0633 ZULU+2 JUL2 – #Dhaka Rashed Nizami, reporter for local news tv channel Channel4, “LEOs talked to hostages inside. The assailants questioned the hostages on the basics of Islam and behaved rudely. Some explosions being heard due to bomb disposal. At least 4-5 assailants captured alive/dead.Hostages were asked to recite the Sura Fatiha – a basic hymn of Islam.”

Confirmed Death Count: 20. 5 Terrorists have been killed and 1 is under custody.

The RAB name for the counter-terrorism operation that ended the hostage situation is allegedly Operation Thunderbolt.

John Sjoholm is a seasoned Middle East specialist with a past in the Swedish Army’s Special Forces branch, and in the Private Military Contracting industry. He lived and operated extensively in the Middle East between 2005-2012 as part of regional stabilizing projects, and currently resides in Jordan.