Lima Charlie News reports on how the battle against ISIS has affected soldier and civilian alike, creating trying times for the people of Iraq as the Mosul Offensive rages on to Day 50.

The Devil lives in Mosul. We are fighting the Devil himself.

The offensive on Mosul is now 50 days in. The battle rages on with unending and relentless fury, extracting a heavy toll on coalition forces. The Kurdish Peshmerga has for the first time reported its casualties, stating a loss of some 1,500 of its fighters. The Iraqi military remains reluctant to provide official numbers, “uncomfortable” describing such losses out of fear the enemy will gain an unintended morale boost.

As Islamic State fighters find themselves heavily outnumbered, they make good use of light weapons, suicide bombers, improvised explosive devices, and hit and run tactics to slow coalition advancements. Intense and unrelenting air support, provided by the US, means they are unable to deploy captured armor. But this may change soon. As Iraqi forces battle towards the inner sanctums of the occupied city, densely populated urban areas make air support increasingly likely to cause civilian collateral damage.

Now, we hope it will be by early in the New Year. But these guys are not cowards.

They kill as easy as they breathe.

– Iraqi Army Sergeant Hussein Mahmoud, from the frontline of Mosul

Stories from the frontlines of the Caliphate – The Ultimate Sacrifice

Iraqi Army Captain Isaa Maroun, 31 years of age, noticed a vehicle traveling on one of the dirt roads away from the checkpoint. The white pickup truck bore no markings indicating it was part of coalition forces. It appeared the pickup was not supposed to be there.

The Captain and one of his men decided to investigate. They pursued the truck in their light weight 4×4. Their unarmored Iraqi Army vehicle was significantly faster than the heavier pickup truck, and they quickly caught up with it. While the Captain attempted to order the vehicle to halt, it sped up to evade its pursuers. The mysterious vehicle appeared to be heading towards a security checkpoint under the Captain’s command further down the road. It appeared to be on a mission of martyrdom.

Captain Maroun radioed ahead. He knew that at the speed the vehicle was traveling, and with recent developments of the enemy up-armoring its VBIEDs, his men had little chance of stopping the would be martyr with only their assortment of light weaponry.

With that in mind, and likely images of his young wife and 2 year old daughter back home in al Kut, Captain Maroun cut his wheel and attempted to ram the vehicle off the road. He slammed his light 4×4 into the heavier vehicle while firing his weapon into its cabin. The VBIED exploded, killing Maroun. The private seated next to him was severely wounded, but survived. Undoubtedly, the young Captain knew very well the risks of the action he chose in order to save his men.

Look at their trucks, they were all given to them by the Americans, and not one of them hasn’t been hit by a rocket. All of their windows have been hit by snipers. They look like they have been fighting for five years. It is closer to two months.

The coalition has continued to apply the American stance of measuring mission success by two stipulations. Was the mission successful. How few civilians were hurt. ISIS does not operate under such restrictions. Success is measured in what can be deemed largely to be the opposite.

With a large mobile fleet of VBIEDs, ISIS has deployed an estimated 650 since the beginning of the offensive, or 14 vehicle bombs of various configurations per day against coalition forces. The use of such tactics is not new. In the narrow back streets and tightly packed buildings of Mosul it becomes nearly impossible to prevent these attacks from being successful. ISIS has equipped some of their car bombs with thick metal cages inside the cabins, protecting the driver and making the bomb on wheels exceedingly difficult to disable.

In late October, ISIS attacked and set fire to the chemical plant in Qayyara, just southeast of Mosul. The plant contained one of the largest stockpiles of sulfur in Iraq. Noxious fumes quickly spread, killing civilians and injuring soldiers responding to the attack. The fumes have since subsided, but the smell of sulfur in the air remains. With the backdrop of raging battles further laying waste to the once beautiful city, trapping helpless men, women and children, many can not help but think that Hell on earth has come to Mosul.

With good information from non-government approved sources becoming increasingly difficult to gain access to, embedded frontline journalists are reporting they are often followed by military minders in “immaculately pressed uniforms,” whose sole mission appears to be preventing negative media portrayal of the offensive. The Guardian’s frontline reporter Martin Chulov mentioned in a recent article having been told by his Iraqi military minders, “don’t take too many pictures of the damage … we would prefer people didn’t see that.”

They were expecting this to be over in weeks. Well, they are welcome to come here and try.

U.S. Secretary of Defense Ash Carter expressed careful optimism that Mosul could be captured before the change of U.S. Administration in January. This careful optimism is in line with promises made by the Iraqi Prime Minister, Haider al Abadi, that Mosul “will be liberated by the end of the year.”

We are desperate; this is the first time I’ve seen aid trucks.

– Resident of Qayara that wished to remain unnamed out of security concerns.

The current and future humanitarian disaster of Mosul

On December 4th, a convoy of trucks manned by unarmed volunteers from the Iraqi military and the Iraqi Government Relief organization reached the towns of Bartella and Qayara, outside of Mosul. They brought much needed humanitarian supplies, including food, water, and medicine. Chaos quickly erupted as hundreds of starving and destitute civilians overwhelmed aid trucks and their crews as they began to distribute food and water. Men, women and children, found themselves fighting over the meager supplies.

While the aid trucks bore markings identifying them as part of the local government, there were no government or security officials present during the turmoil that arose on the eastern edge of the city.

Inside Mosul, merely 10 miles from Bartella, another aid distribution in the Bakr neighborhood saw Iraqi Special Forces distributing boxes to the hundreds of men and women lined up along a residential street. The echo of gunfire and explosions rang in the backdrop of the aid station. A mere 50 yards away war raged, with those who had just received the precious boxes having to skirt sniper fire and incoming rounds to return home to their families. 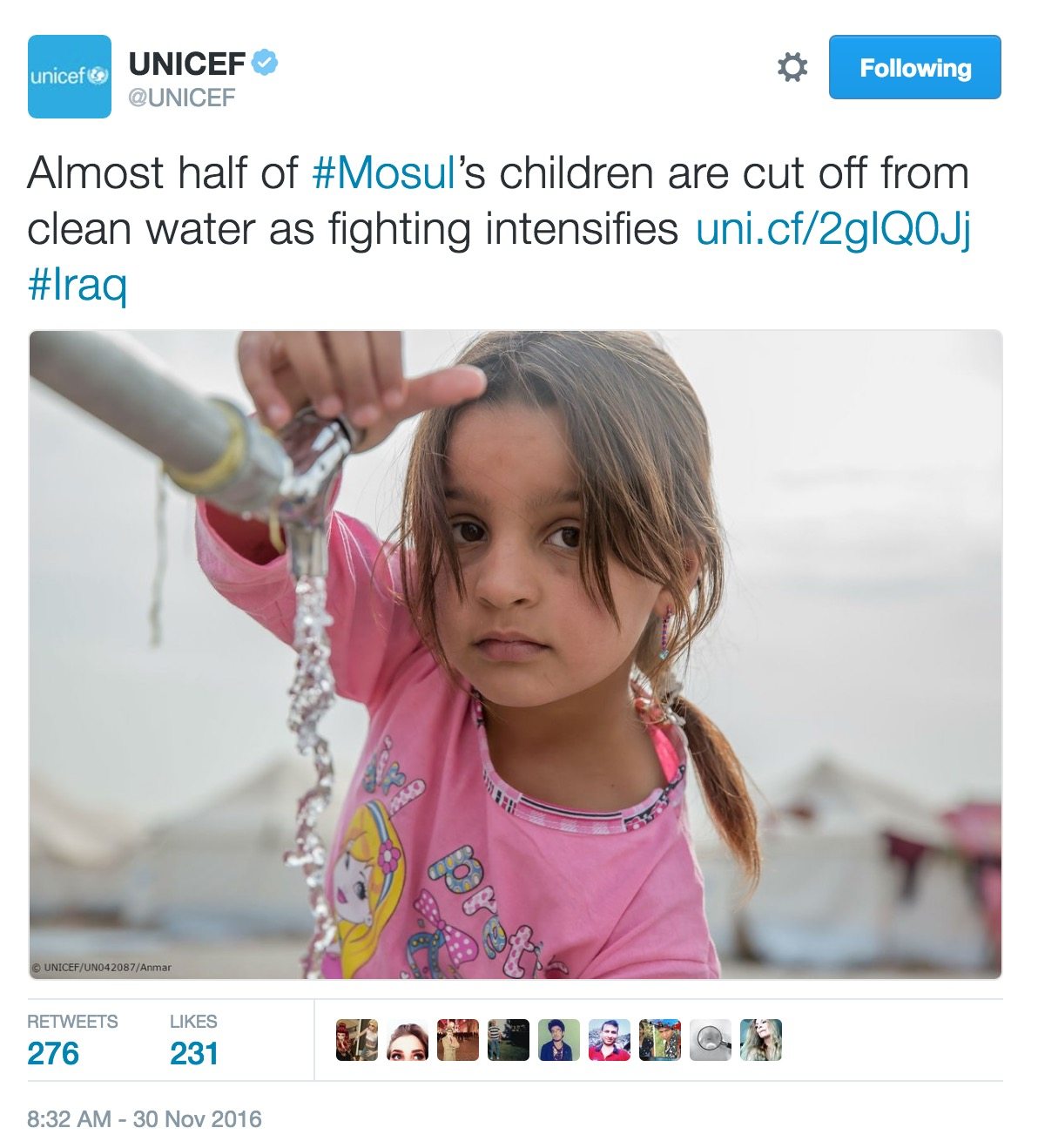 While aid delivery is ongoing, an Iraqi military ambulance and armored vehicle carrying wounded soldiers rush past. An ISIS suicide car bomb had successfully struck a nearby army station set up to protect the perimeter.

One Iraqi Intelligence operative, speaking to Lima Charlie News on condition of anonymity, stated that some Iraqi Special Forces troops have taken upon themselves to dress in civilian clothing, so they can escort civilians back home through the war zone, and where possible, to medical care. Doctors, unable to venture into this area, provide Special Forces members with medicine and aid to help civilians that come to the Bakr aid station. Many civilians are in need of help searching for their children and elderly trapped inside the unsecured area.

Iraq will not misplace its humanity as long as it fights for its people.

According to a United Nations report released on December 1st, nearly 900 civilians have died in the Nineveh province, where Mosul is located, since the beginning of the offensive. The U.N. number is widely believed to be short by more than a thousand civilian deaths. Hundreds of thousands more have been forced to relocate, and many more are trapped inside the war zone. The Iraqi conflict has displaced over 3.3 million registered refugees, or 10% of Iraq’s population, since ISIS seized around a third of the country in 2014, the U.N. said. While the Iraqi Army has pushed the militants back, ISIS still controls vital parts of the country and hundreds of thousands of civilians remain under its control. 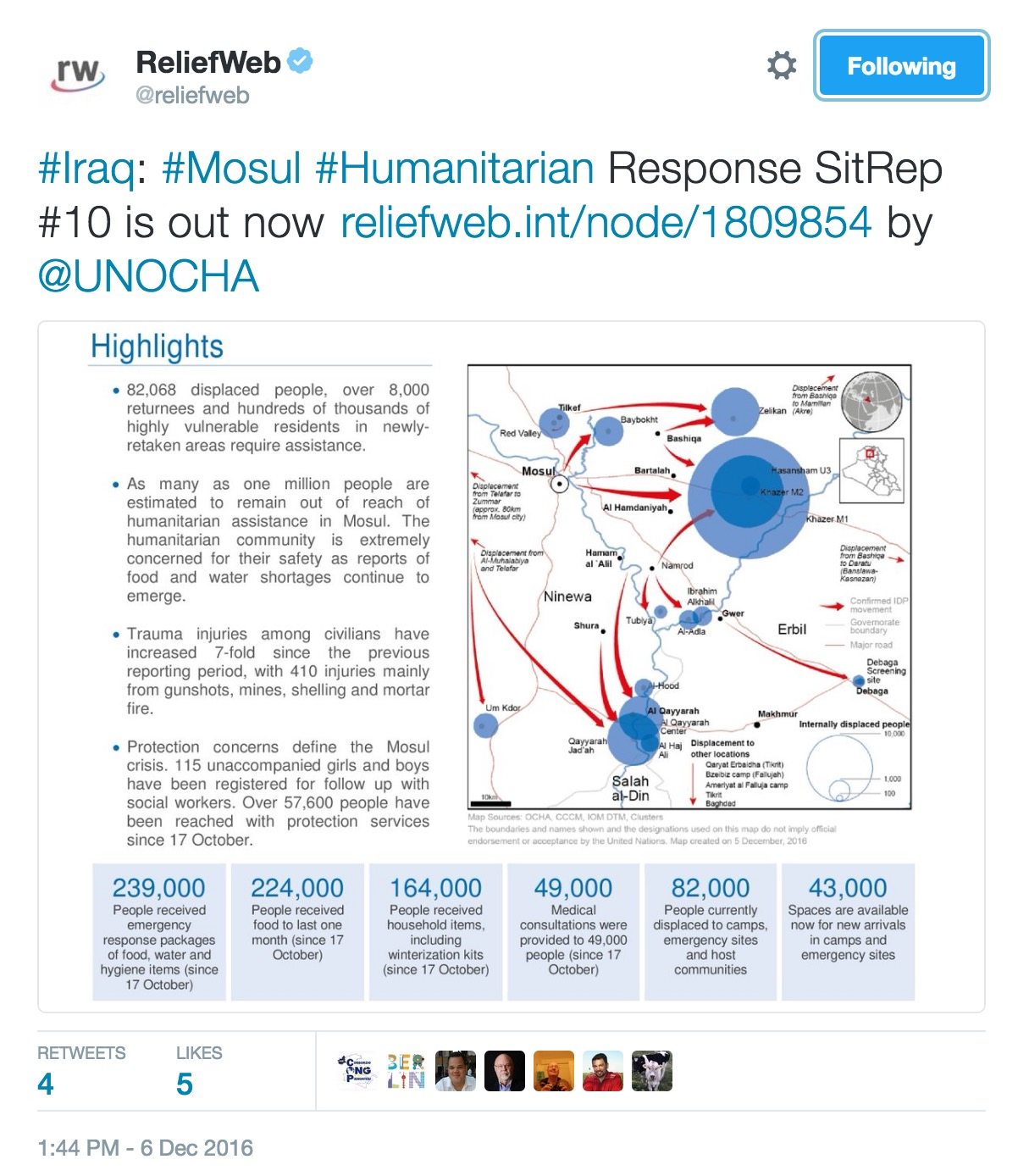 As Iraqi forces continue to gain ground and encircle ISIS strongholds, supplies inside those strongholds, food, medicine, and water, continue to dwindle. As militants continue to exert control through violence and terror, their needs will likely be met at the expense of civilians. As the offensive continues to intensify, aid deliveries into Mosul may very well feed the enemy rather than those that need it most.