[MISC]: The Qatari-Gulf State diplomatic situation; The Qatari-Gulf State diplomatic situation continues to unravel, with Saudi utrabia declaring its demands on Qatar to be “non-negotiable, and must be implemented in full”, whereas Qatar states that the demands were designed to be “unreasonable” and “impossible not to reject”. Qatari Foreign Minister, Mohammed bin Abdulrahman al-Thani, has held meetings throughout the week in Washington DC with US Secretary of State, Rex Tillerson, hoping that the US can intervene on Qatar’s behalf regarding the demands.

On JUN30, the Qatari Foreign Minister stated that he was willing to “at least open negotiations” regarding the demands, as long as the deadline is extended. Egypt announced on JUL2 that the deadline, for Qatar to accept the demands, which was on JUL2, will be extended to JUL5.

Opposition Shiite groups continue to call for protests and public gatherings throughout the week. Small gatherings and protests were held, but with little impact or local coverage. No gathering reached critical mass, which would have resulted in Bahraini security forces interjecting.

JUN29, al-Dair, Bahrain; Security Forces raided several safe houses being used by the al-Ashtar Brigade, a Shiite militia group, in al-Dair during the early hours of JUN29. Al-Dair is located north of the Bahrain International Airport, and is a low income residential-shipping hub, which has a noticeable presence of Shia residents. Two separate cells were targeted, and a minimum of 7 individuals were detained during the operations. In at least one of the safe houses several high explosive devices were found, along with tasers, diagrams, and ammunitions. According to the Ministry of Interior (MoI), Security Forces also found several videos of al-Ashtar Brigade members demonstrating various explosive devices, and their impacts.

JUL1, Bahraini territorial waters to the north, Bahrain; MoI has stated that the Coast Guard intercepted a boat inside the country’s territorial waters, the boat was carrying “large quantities of narcotics”, described as hashish and methamphetamines, presently valued at $660,000 USD. According to the MoI, the boat originated from Iran. Two individuals, both of Bahraini nationality, were on board at the time of the seizure.

JUL2, Sheikh Salman Highway, Bilad al-Qadeem, Bahrain; Shiite opposition affiliated media outlets have claimed that an Improvised Explosive Device (IED) struck a security forces vehicle on the Sheikh Salman Highway during the night between JUL2 and JUL3. Non-Shiite opposition affiliated media has reported the sound of explosions from the area. MoI is yet to respond to these claims.

In the past week, at least 3 new cases of Middle East Respiratory Syndrome Corona Virus (MERS-CoV) have been reported by the Ministry of Health (MoH). The majority of the cases are reportedly situated inside the greater Riyadh province.

JUN29, Cairo, Egypt; fuel prices were raised by up to 55%, in the second round of price increases since November 2016. These measures are part of the conditions of a 3 year $12 billion loan package Egypt is receiving from the IMF. In order to secure the loan on November 3, 2016, the Central Bank of Egypt floated the Egyptian currency, which had previously been artificially pegged to the dollar. Overnight the currency devalued by almost half.  After the liberalization, the exchange rate, which was pegged at 8.8 EGP to 1 USD, increased to 16 EGP to 1 USD. These measures are expected to help Egypt’s floundering economy and to decrease the public debt. However, inflation is at 30% and the higher exchange rate and fuel prices are raising the price of ordinary household staples. This is having a direct effect on the population, as nearly 50% live below or near the poverty line.

JUN30, Cairo, Egypt; Protestors blocked several main thoroughfares, including the 6 October Bridge, in Cairo in protests of the rising petrol prices. As a result of the increase of petrol prices, fights have broken out between taxi drivers and passengers. Taxi drivers have stated that the legal fare increase set by the government is too low, in light of the gasoline prices. Several drivers throughout the country have been arrested for attempting to incite taxi strikes.

JUN30, Cairo, Egypt; JUN30 marked the 4th anniversary of the protests that led to the removal of former President Mohammed Morsi from power in 2013. Morsi was aligned with the Muslim Brotherhood agenda, and was removed from power on JUL3 by the Egyptian Military.

JUN26, Berlin, Germany; German federal police warned German parliamentarians that they may be under intelligence observation by Turkish intelligence operatives operating in Germany, this according to a report by the Die Welt Newspaper.

JUL2, 106th Street, Ismetpasa neighborhood, Istanbul, Turkey; 3 individuals suspected of involvement in militia and terror activities were detained during a raid on a marble workshop on 106th street in Ismetpasa. Suspected explosive material and devices were found on the scene.

JUN27, Gaza Strip, Palestine; Israeli Air Force struck two Hamas ground targets in Gaza in response to a rocket launched against a settlement, the Shaar Hanegev, in southern Israel. The Hamas rocket attack did not result in any collateral, and there have been no reports of any collateral due to the responding attack by the Israeli Air Force.

JUN28, Israel; The Israeli Air Force carried out an attack against a Syrian military position in the northern Golan heights area on JUN28 in response to the position having shot a mortar round into Israeli territory. The Syrian Arab Army (SAA) position is located near the village of Samadanieh al Sharqiyah in the Qunetra Province, and is believed to have launched the shell against the nearby Israeli territory by accident. There were no injuries in either attack.

JUN29, Tripoli, Libya; A United Nations (UN) convoy operating as part of the UN Support Mission in Libya (UNSMIL) was attacked while traveling on the main coastal road between Surman and Tripoli, 7 kilometers west of Tripoli, on JUN29. The unidentified attacking militia group held the UN staffers, consisting of 5 males, and 2 females, from the convoy briefly before releasing them. The convoy arrived safely in Tripoli with a 5 hour delay.

JUN30, Arsal, Lebanon; 5 militants blew themselves up during a raid by the Lebanese Army inside a refugee camp near the Syrian border on JUN30. One civilian, a young girl, and 3 soldiers, were injured as a result of the explosions. The Islamic State and the Jihadist group Jabhat Fateh al-Sham both have a strong presence in the area of Arsal and are believed to be operating in and out of refugee camps in the area. 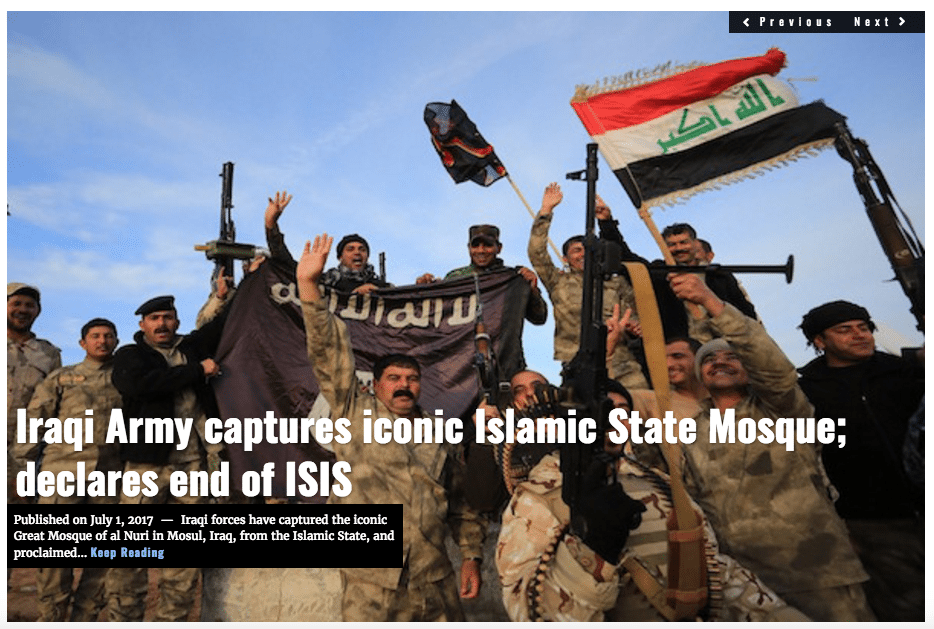