In the UK, a fusion reactor has been activated and achieved “first plasma,” a molten mass of electrically charged energy. Tokamak Energy, a leading fusion energy company, constructed the plant and has plans to introduce fusion power to the grid by 2030.

Now that plasma has been generated, the plant known as ST40, needs to install magnetic coils to increase the temperature to fusion levels; 15 million Celsius, the temperature of the center of the sun.

If successful, fusion energy has the potential to generate limitless energy, without generating any carbon emissions, and limited waste. The nuclear fission power plants require salt and water, and generate helium as a wasteful byproduct.

Thus far, there are two techniques for fusion reaction.

The first, used by Tokamak, involves a donut shaped reactor, in which a circle of magnets, with another magnet in the center, create a magnetic field that rotates the plasma around the center. The magnets are doused in liquid helium and kept within a few degrees of absolute zero, minus 273.15 degrees Celsius. 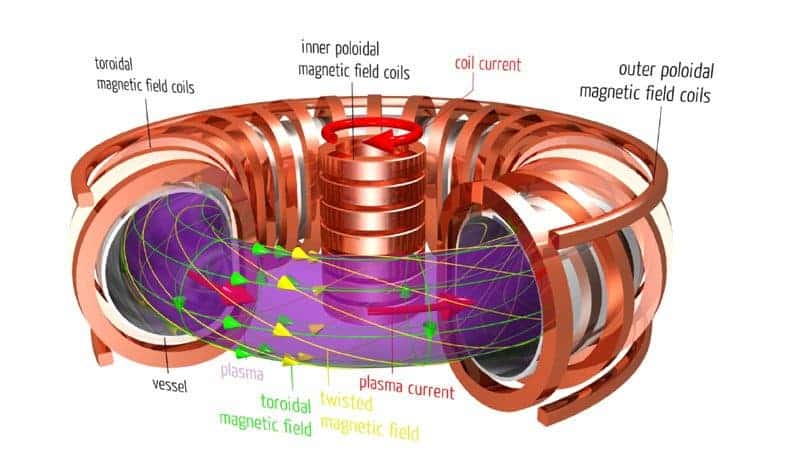 The other style of fusion reaction generation uses lasers to heat up a pellet of fuel. The pellet can implode when sufficiently heated, making it hot and dense enough to fuse. The National Ignition Center in the United States uses the world’s largest laser in this technique.

Fusion is the technique used to create the largest explosive device in the world, the hydrogen bomb. Hydrogen bombs use the energy released from a fission bomb to fuse atoms together, unleashing a wave of heat and radiation that constitutes the explosion.

According to scientists, the dangers of the devices are limited, mostly because an accident can’t spiral into a self perpetuating reaction like those in Chernobyl, Three Mile Island, and Fukushima. Further, the quantity of fuel for the reaction that is in the device is limited to a few grams, whereas fusion bombs take tons of material to create their explosions.