| Southern Thailand – On the eve of Mother’s Day, and mere days before the anniversary of its most deadly attack in modern history, Thailand was rocked by twin bombs outside of a bar in the resort town of Hua Hin. The initial blasts were followed by a wave of 9 bombings that killed 4 Thai nationals and injured about 36 others. Thursday night’s attack brought back painful memories of the Erawan Shrine bombing, which took place almost one year ago, killing 20 people in its wake.

Perhaps fresher in the minds of local Thais, however, is a controversial referendum vote, just five days ago, that approved a military-backed constitution. To many, it’s no coincidence that the bombs went off just before the 84th birthday of Thailand’s Queen Sirikit, a monarch whom the junta has declared it will defend to the utmost of its ability. Queen Sirikit’s husband King Bhumibol Adulyadej is the world’s longest-reigning monarch, and the couple live together in Hua Hin’s Klai Kangwon Royal Palace. So ingrained in the minds of Thais as “the Mother of all Thai people,” in 1976, Mother’s Day was officially changed from April 15th to August 12th so as to be celebrated the same day as Queen Sirikit’s birthday.

Of the 19 wounded, three are in serious condition and seven are foreigners, including two British nationals. Prime Minister Prayuth Chan-ocha took to his weekly podium to address the nation, in the wake of the attacks: “The bombs are an attempt to create chaos and confusion,” he began. “My government will take care and provide full support and we will investigate this and bring those behind these attacks to legal prosecution with our best ability.” He conveyed a message of unity, while reminding those in the country to remain vigilant while in tourist hotspots in the coming days.

Hau Hin wasn’t the only town targeted, in what seems to be a wave of well-coordinated attacks across the country’s South. On Friday morning, another set of twin bombs hit Surat Thani, and other explosions rocketed through Trang, Phang Nga, and Phuket. 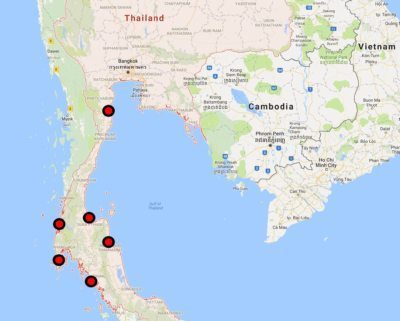 While the bombings hit amidst an array of chaos and disarray, an underlying theme seemingly emerges. According to authorities on the ground, reports have surfaced that all of the areas hit voted heavily in favor of the military-penned constitution. Polling from the recent referendum demonstrated majority support in the northern provinces of Thailand, while provinces in the Deep South heavily voted down the charter, with the exception of these few areas.

However, currently no group has officially claimed responsibility for the attacks. While some believe the blasts herald in a new wave of brinkmanship, in the wake of the referendum vote, members of the opposing camp note that a more effective target would have been Bangkok or another major city like Chiang Mai. Such an attack would have sent a clearer signal to the junta, on behalf of insurgents.

At of yet, external terrorist organizations like the Islamic State have exercised futile attempts at making inroads into insurgency efforts, likely precluding them from culpability.

Still, another possible explanation exists. Given that violence in Thailand’s three southernmost provinces—Yala, Pattani, and Narathiwat—is largely commonplace, the attacks could simply be the continued backlash from the ousting of the former prime minister Thaksin Shinawatram, unrest which has spanned more than a decade. Since 2001, politics in Thailand have become increasingly polarized between the yellow-shirt loyalists (People’s Alliance for Democracy), who support the monarchy and military, and the red-shirts (United Front for Democracy Against Dictatorship), who favor ousted Prime Minister Thaksin Shinawatra and his sister, also ousted Prime Minister Yingluck Shinawatra. Red-shirts view attempts by the military elite to control Thai politics as a threat to democracy.

The US Embassy in Bangkok has since released the following statement:

“Travelers to the area should avoid the affected areas, review your personal security plans; remain aware of your surroundings, including local events; and monitor local news stations for updates. Maintain a high level of vigilance and take appropriate steps to enhance your personal security and follow instructions of local authorities.”

Thailand is a tourist-heavy destination, with islands like Phuket and Surat Thani serving as the gateway to picturesque destinations in the country’s Gulf. This industry has been one of the few glimmers of hope in an otherwise currently sluggish economy.

As of 1:30 PM (EST), police in the Hua Hin beach resort have arrested two men in connection with the initial bombing. The individuals were detained in light of CCTV footage appearing to show them in the area before, during, and after the bombings, but authorities are withholding further information.

National Police Chief Chakthip Chaijinda also told reporters that police had prior intelligence that an attack was coming, “we just didn’t know which day something would happen.” While there have been small-scale attacks following the constitutional referendum, using improvised bombs, early evidence of Thursday’s and Friday’s attacks show the blasts came from low-explosive devices detonated to make an announcement, rather than reap massive casualties.

As Lima Charlie News continues to monitor the unfolding situation in Thailand, our hearts and prayers go out to the families of the victims of this senseless tragedy and the 36 individuals still fighting for their lives. We will continue to bring you the latest on these developments.