The International Basketball Federation (FIBA), the Swiss-based 213 member association governing international competition in basketball, is dragging its feet on the reversal of a highly controversial rule. Commonly known as the “hijab ban,” Rule 4.4.2 states, “players shall not wear equipment (objects) that may cause injury to other players.” This extends to casts, forearm guards, jewelry, and headgear.

Rule 4.4.2’s language is not intrinsically discriminatory; the decade-old rule was created to promote safety and uniformity on the court. As more women, particularly Muslim women, joined the sport in recent years, complaints against the rule became more common. The headgear ban routinely and almost exclusively impacts those who wear hijabs, turbans, and yarmulkes. As most other athletic organizations have already removed similar bans, it has become highly questionable to justify the rule as a safety measure. 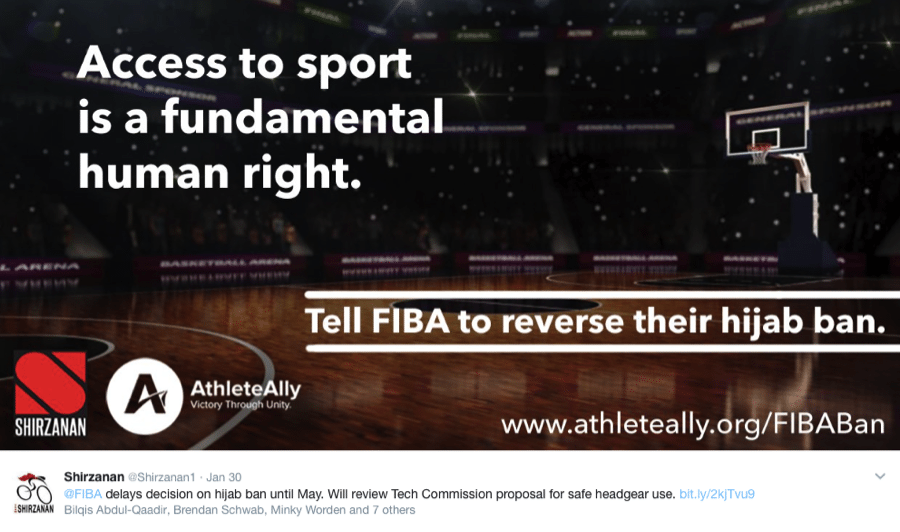 There has been significant pressure from athletes and organizations worldwide to reverse the ban. FIBA postponed a decision on the rule last year and was expected to make a decision at FIBA’s executive committee meeting this January.

In a 30 January press release on vote topics, however, there was no mention of the ban. FIBA did put out a statement that its board had issued a mandate for the Technical Commission “to come forward with a proposal that would allow headgear to be worn safely by athletes.” This proposal is due in May, with vague plans for a possible vote.

While there is room for cautious optimism, after years of sidestepping and delaying, many ask what it will take for FIBA to finally do away with its discriminatory policy.

When was the last time a basketball player was injured by a yarmulke?

Against an overwhelming lack of evidence to suggest that religious headgear poses a safety risk on the court, FIBA has done the bare minimum to rectify the problem. In 2014, it established a test run reversal of the ban to check potential safety issues. Its guidance, however, was unclear, unhelpful, and unsupportive to athletes. The ruling remained in limbo with many basketball players forced out of professional competition because of it.

Most athletic bodies have disavowed such a restriction. The NCAA has no prohibition against religious headgear and even FIFA overturned its hijab ban. In Rio, Egyptian Olympians played beach volleyball wearing hijabs, and at all levels across the globe, women play soccer in religious headgear. This includes the Afghanistan Women’s National Football Team (coached by U.S. Marine Corps veteran, Haley Carter).

Sports demonstrates the absolute best of humanity, and right now, we could all use more of that. Diversity is a key value for sports, and a rule that overwhelmingly targets Muslim, Sikh, and Jewish athletes is a slap in the face to all athletes, and is counter to FIBA’s general statute on zero tolerance for discrimination.

While it seems likely that FIBA will fully and permanently reverse the ban, its refusal to act swiftly damages the very sport Rule 4.4.2 is supposed to protect. The ban has forced athletes to choose between their passion and their devotion, which only serves to eliminate strong talent and weaken FIBA’s brand. Sports are better than this. FIBA should be too.

Stephanie Kline is a Department of Energy contractor, managing veteran workforce development programs for the solar technologies division. Previously, she led Environmental Defense Fund’s military and veteran clean energy initiatives. She served as an adjutant in the U.S. Marine Corps and was selected for an aide detail as a second lieutenant. She also supported the Marine Corps Installations-East efforts on compatible land use, focusing on farm and forest preservation near high value training areas. Prior to commissioning, Stephanie was a policy analyst for DoD’s Sustainable Ranges Initiative. She is a member of the Truman National Security Project Defense Council and an Armed Services Arts Partnership contributing artist.