The Trump administration released its “America First” National Security Strategy (NSS) this week. Many are scratching their heads trying to figure out what exactly is the “America First” vision.

The America First vision is complex, mixed with both continuities from previous strategies combined with President Trump’s populist language. It is no surprise that the NSS includes building the US-Mexico wall for better border security, demanding two-percent burden sharing from NATO allies by 2024, and addressing trade imbalances, while discouraging multilateral trade agreements, and avoiding climate change as a national security threat. However, the text includes a multitude of norms from previous strategies.

The NSS is outlined in four pillars: defending the homeland, protecting American prosperity, sustaining peace through strength, and advancing American influence. At the end of the document, the strategy presents a regional context. Based on the language, the NSS includes all three traditional grand strategies: American primacy, offshore balancing, and liberal internationalism. American primacy appears to dominate the America First vision with some features from liberal internationalism and offshore balancing.

Here are my Key Takeaways:

The Trump administration is ultimately trying to achieve American primacy.

In pursuit of American dominance in the twenty-first century global arena, the current administration seeks to ensure that American power is unchallenged. Similar to previous administrations, the strategy advocates for the modernization of the U.S. military and the maintenance of a competitive nuclear arsenal.

Included in the strategy is the use of unilateralism, an obvious reminder from the Bush Jr. administration: the U.S. will not hesitate to act unilaterally over collective action to defend U.S. interests, even if it is perceived to be a global disruption or politically incorrect. A concrete example of this behavior so far is recognizing Jerusalem as the capital of Israel despite strong global resistance. Within the past year, the world also witnessed American unilateralism when the U.S. departed from many multilateral policies including the Trans-Pacific Partnership (TPP), the Paris accord, the Iran Deal, and the UN Global Compact on Migration, seeking to deal with the more than 60 million people who have been displaced worldwide as a result of conflict, poverty, or climate change.

Furthermore, the strategy shows how the U.S. rejects emerging competitors by highlighting Russia and China as revisionist powers. The NSS clearly demonstrates this point by accusing Beijing of being an economic aggressor that is not abiding by international economic rules and norms, is acting as a currency manipulator, and is expanding manipulative economic development projects in vulnerable areas across Africa and Latin America.

Moscow, on the other hand, seeks to undermine our democracy and those in Europe through information operations. The NSS adds that the U.S. is willing to counter revisionist powers through competitive engagement.

Surprisingly, some features of liberal internationalism survived the NSS but on a limited basis.

It is essential for the U.S. to maintain its alliance system by remaining engaged in key organizations like NATO, the United Nations, and Bretton Woods Institutions (IMF/World Bank). Yet, U.S. involvement in international institutions will not be a smooth ride. Throughout this year, the international community has witnessed this behavior when the current administration aggressively pushed for reform at the UN and demanded the two-percent budget at NATO. However, the strategy included the use of multilateral cooperation as a helpful tool to confront global security challenges. Through collective security, the U.S. will continue to combat terrorism, stay committed to nuclear non-proliferation, and counter the spread of infectious diseases.

Most importantly, the NSS loosely embraces the importance of the post-cold war liberal world order. The strategy indicates that the U.S. is still committed to some major international norms such as human rights protection, defeating transnational terrorists, empowering women and children, reducing human suffering, and isolating non-democratic aggressive rogue states like North Korea and Iran. The strategy includes that the U.S. is willing to use any of its foreign policy tools to safeguard these norms. Unlike any previous administration, however, the America First vision fails to stress the importance of the spread of global democracy, and America’s role as leader of the free world. The NSS does include some features of offshore balancing, such as promoting sovereignty and being the arsenal of democracy.

The America First doctrine repeatedly underscores the importance of sovereignty and shared responsibility. It is vital for our allies as sovereign states to have greater responsibility in countering shared threats. Our allies should preserve our interests independently from U.S. assistance. The strategy encourages our partners to rapidly “modernize, acquire necessary capabilities, improve readiness, and expand the sizes of their forces.” It is no surprise that point is included. POTUS’s first address at the UN General Assembly discussed the importance of sovereignty.

On the other hand, the strategy mentions that the U.S. is committed to countering regional foes (Iran and North Korea) by providing enablers to our partners in Indo-Pacific and the Middle East. Under the current administration, one of the most obvious examples is the massive arms deal with Saudi Arabia to help counter Iranian aggression.

America First is an unprecedented strategy that will be remembered for its policy contradictions, countless inconsistencies, and a departure from post-cold war international norms. Consequently, this will probably be the most read NSS in U.S. history. However, the majority of Americans will not read the strategy.

It’s all in the execution

Moving forward, the only thing that really matters is execution. Publishing a strategy is helpful, but execution is more essential. Both the American people and foreign governments will judge the strategy based upon how it is executed.

Many critics remain doubtful about effective execution because of current conditions. To name a few: weak strategic communications, the depletion of the State Department, the discrediting of our institutions, the weakening of our role in international organizations, the disengagement from multilateral agreements, disruptive global leadership, soft behavior towards Moscow, constant Twitter fights with foreign dignitaries, etc. All of these factors serve to undermine U.S. goals.

Above all, America must hold the administration accountable for its strategy and ensure that we are achieving credible results that best represent our interests and strengthen U.S. global leadership. 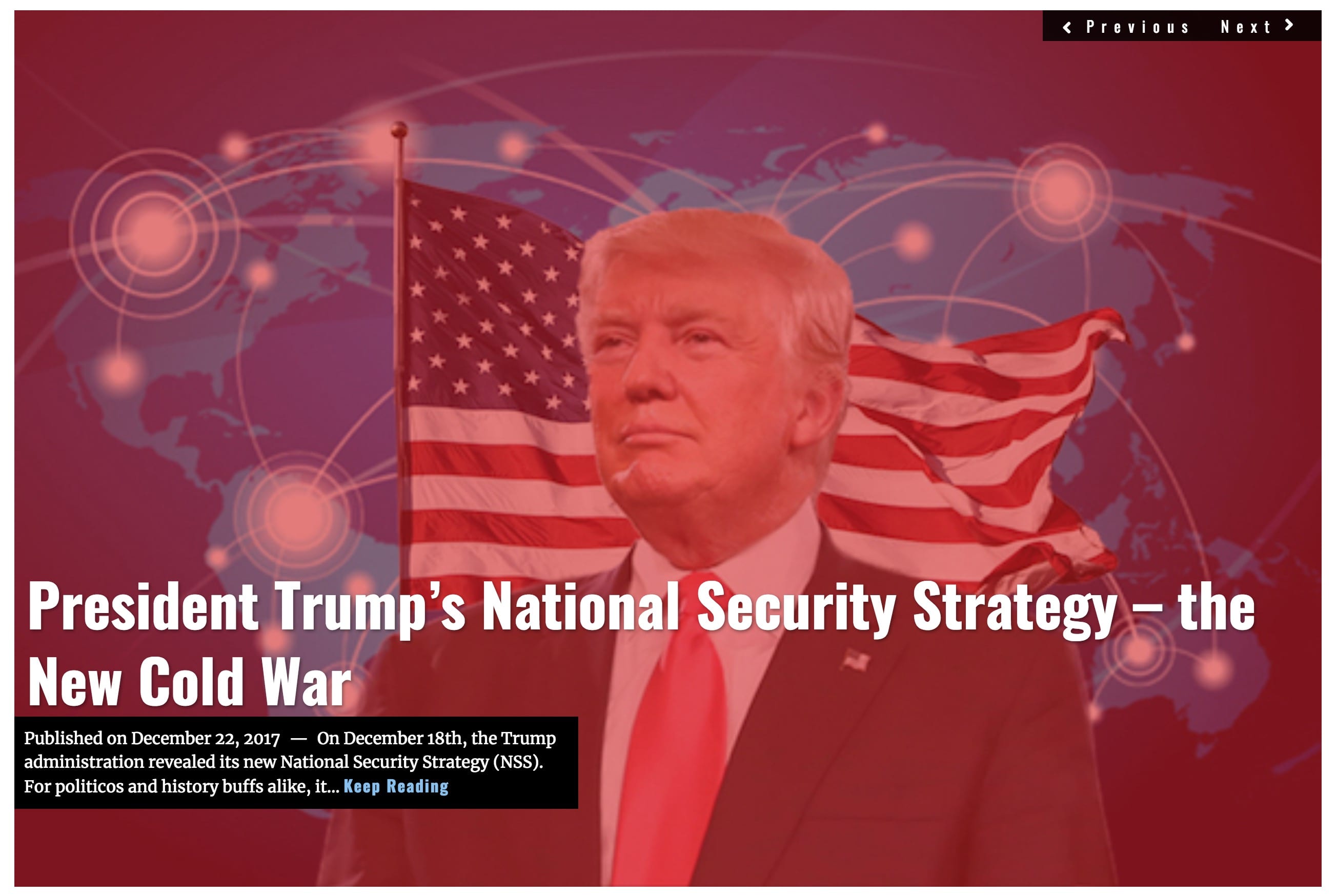