Below the Iraqi Air Force Mi-35M1 Hind attack helicopter, the khaki colored landscape becomes a sun bleached patchwork of brown, black, and green, separated by ditches, trails, and buildings. Below the Hind, a small village lay in ruins. Ripe bodies remained, scattered, covered in swarms of black-bodied flies. Men, women and children lay beside dogs and donkeys. Few were left alive. An unbridled hatred had swept through the village leaving nothing in its wake. The story of one village appearing much the same as the others.

Retreating Islamic State fighters, not content with executing a strategically viable retreat to positions better suited for coming battles, apply a scorched-earth strategy. Villages are left aflame, its inhabitants and animals butchered. Booby traps are made of the dead and of the buildings.

The helicopter crew follow the main dirt road leading away from the village towards what was abstractly called the frontline. Everywhere is a frontline. Syria and Iraq, two great nations, rendered one continuous battlefield. The metropolis of Baghdad and Damascus see daily attacks. The families of soldiers on the frontline are nearly as exposed to attack while visiting the market to buy vegetables as the soldiers are themselves.

The Iraqi nation is tired. Weary of years of asymmetrical warfare with no realistic end in sight. Orders from leadership to a 60,000 men strong, newly regrouped force, represent this. Orders from Lt. Gen. Abdul Amir Rashid Yarallah and his superiors in Baghdad are impossible to misunderstand. Serve us Mosul on a plate. Disregard the losses. City is ours to take. Liberate Mosul now.

As a result of this weariness, the number of prisoners taken by the Iraqi military and their affiliated militia groups has diminished amidst casualty rates continuing to skyrocket. Iraqi Special Forces operating inside the burnt out husk of Mosul have nearly given up attempting to capture alive fighters in the Islamic State enclaves. It is deemed a risk not worth taking.

Amidst this, on February 19, Operation Western Bank Liberation began.

With the frontlines appearing all the more abstract and non-linear, best resembling lines in a shattered mirror, the combined forces advance across the greater Mosul area. At times they advance at blazing speed, reminiscent of the Desert Rats, a nickname for the British 7th Armoured Division that skirted across the frontlines of North Africa during World War 2. 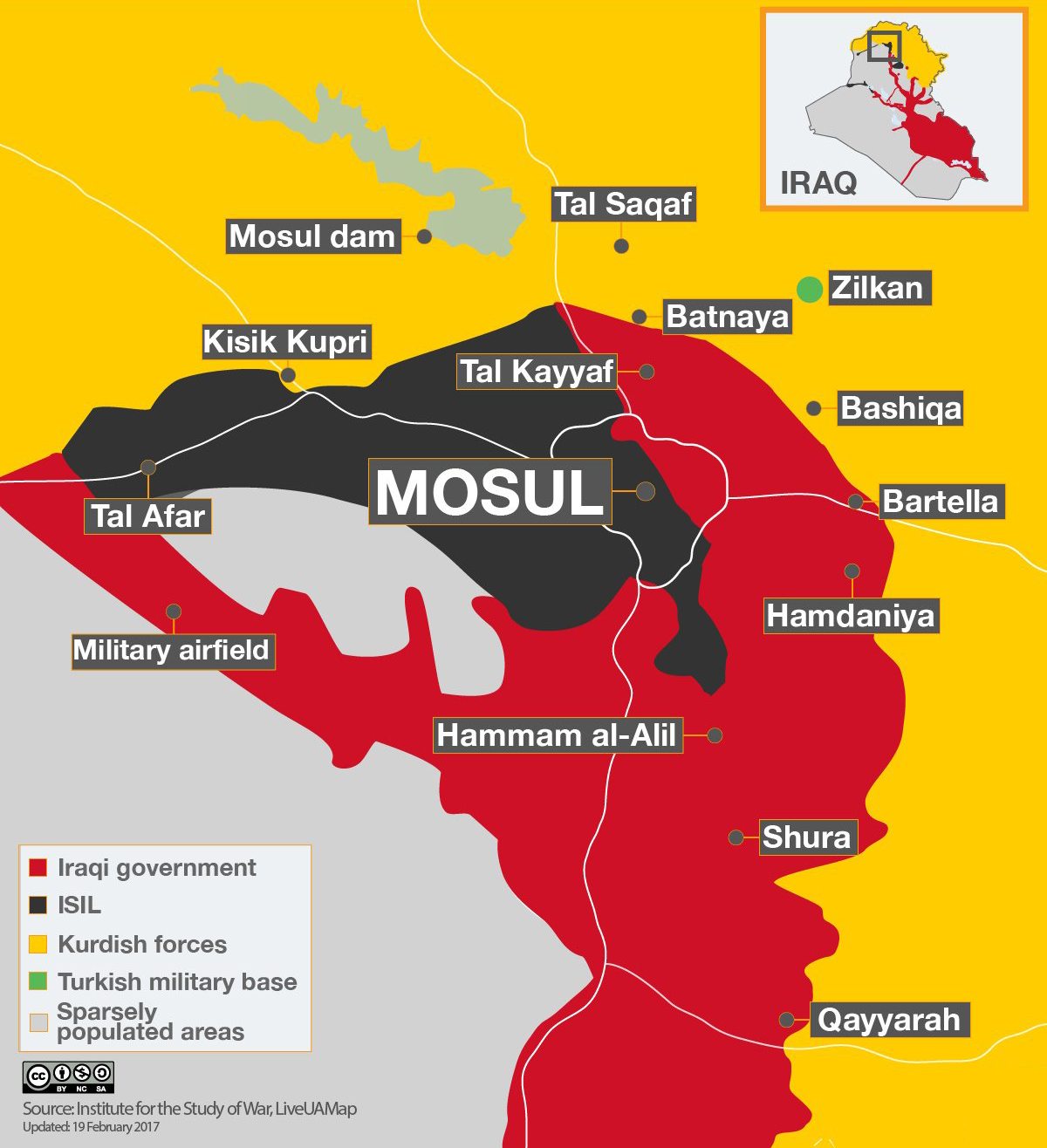 At the time of writing, the Iraqi regular Army and militia groups are mere kilometers away from entering Mosul. In recent days, dozens of villages have been secured by these forces, and while they have been encountering minute resistance in most cases, they know full well that this is not because the back of the beast is broken. Rather, it is because the beast is skirting away, into Mosul. ISIS forces are committing to tactical retreats, to reinforced points, in preparation of the defense of their central Mosul positions.

The on ground offensive is spearheaded under the coverage of heavy armour and mechanized troops – the Iraqi Armoured Brigades are pushing forward as part of the offensive on every corner of Mosul. Behind the armored units come Rapid Response forces, Special Operations Forces, trained in close quarter combat, ready to enter buildings and prepared for tactical engagements.

Among those following in the wake of the armored units is the circa 8,000 men strong force of Mosuli fighters. Men who had to flee Mosul as it fell to ISIS, and have since been trained by American Intelligence and Special Operations community members to enter and liberate the city as part of the local community. These men are spread out across the Iraqi Federal Police, Army, and militia groups, and are widely referred to as the “Mosul SWAT” fighters.

As Iraqi forces advance deeper and deeper inside Mosul, into narrow streets, the peril of becoming dependent on the protection of armored units – which run the risk of being disabled and becoming mere static targets – increases. For the time being, the presence of armor is a comforting sight and seen as critical to keep casualty numbers down. Above the onslaught of tanks and fighting men advancing is the sound of near constant air strikes. The roar of coalition warplanes going in for the kill, engaging ground targets in and around Mosul.

Air assets primarily focus on infrastructure targets, along with buildings known to be housing large concentrated numbers of ISIS fighters and leaders. Recent strikes have seen an increase of targeting telecommunications and administrative agency buildings among others, specifically at Al-Dawasa, as well as checkpoints at the embankments of Mosul’s bridges.

Inside the city ISIS has had time to prepare, building high concrete anti tank barricades on the eastern side of the Western Bank. The barricades begin by the Musherifa neighborhood and run all the way to the Mosul Hotel area, creating a barrier where tanks must slow down and enter narrow bottlenecks created by ISIS to engage and disable them.

Throughout February 20th Iraqi forces have advanced towards Mosul Airport, south of the city, where ISIS has training and storage facilities. Intelligence reports from the airport offensive indicate that resistance has been lukewarm, and that ISIS has largely given up defending the airport area, withdrawing from it, redistributing its forces towards the city center instead. The overt liberation of the airport should soon be at hand, at a low casualty cost.

These are still the early days of the new operation, of the renewed efforts, and all the pieces are not yet in their intended positions. It is expected that within a week, as Iraqi forces pass through the city outskirts and into residential neighborhoods where ISIS has entrenched itself, the fighting will begin in earnest. The American led coalition is reportedly designating additional air assets and firepower to the west bank operation, including increasing close air support capable air assets such as attack helicopter platforms.

An intelligence review of the liberation of the Western Mosul bank operation indicates that ISIS has some 2,500 fighters in the immediate battle area that Iraqi forces will be soon find themselves operating in. Of the 2,500 fighters, 40% are believed to be teenagers, 7% children 12 years or younger. Many of these young fighters have known nothing but the rule of ISIS during their formative years.

How these young ISIS fighters will behave as the final stages of the Mosul offensive comes upon them is unclear, but historically, ISIS has used such recruits as cannon fodder and often as delivery methods for suicide bombs.