The US gears up for another offensive on the Islamic State, the liberation of al Raqqa. Obstacles are many, least of which is Turkey’s vehement opposition to the use of Kurdish fighters, a critical force in the coalition. Will the US risk alienating its NATO ally to ensure success?

For the past few weeks, the US has been pushing for a plan to utilize Kurdish Peshmerga forces in their fight against the Islamic State. This has elicited the expected response from Ankara – one of ardent obstruction. But the battle for al Raqqa is imminent, despite the Turkish government’s opinions on the matter. While no public date has been set for the offensive, in a recent interview, U.S. Defense Secretary Ash Carter told NBC News that it would begin “within weeks,” and the reason the Pentagon has been stirring up the media, was to ensure that all relevant parties could prepare, while assuring total US commitment to the operation.

The Mosul offensive has been a great success for Defense Secretary Carter and the Obama Administration. In light of this, Secretary Carter was quick to acknowledge that a potential Raqqa offensive would bear similar fruit. “It’s been long a part of our plan that the Mosul operation would kick off when it did. This was a plan that goes back many months now and that Raqqa would follow soon behind,” he was quoted as saying.

The interest in Raqqa is understandable. This is not just the self-declared capital of ISIL. Raqqa is where militant fighters have vowed to wage a final apocalyptic battle to bring about the End of Days. 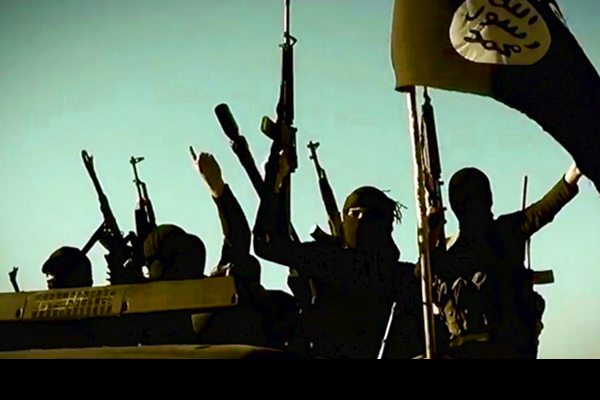 Currently, the strategy is to isolate Raqqa, preventing reinforcements from Mosul. The problem is that IS could amass a significant force there, enough to further disrupt the Syrian government and stall progress long enough to become a defined power block.

Isolating Raqqa has proven difficult, with reports that fighters are continuously crossing through Ba’aaj, south of Sinjar, which also serves as a gateway to Syria. The route to and from Ba’aaj is largely under IS control. The coalition routinely conducts air strikes, as well as mobile ground assaults, attacking convoys of IS fighters in an attempt to disrupt movement. Despite this, the number of fighters reaching safe haven far outweigh those that do not. 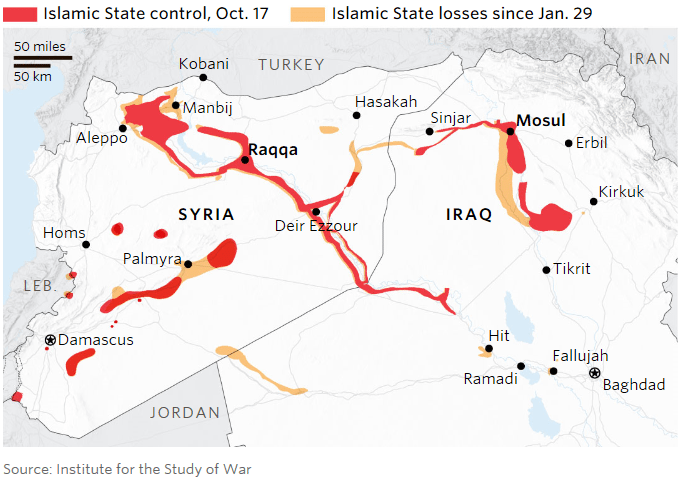 The Iranian allied Iraqi militia, Popular Mobilization Units (PMU), has pledged to ensure that troops engaged in Mosul will not let IS fighters exit towards safe haven in Syria. Hezbollah has made a similar pledge to stop incursions from these fighters on the Syrian side. All parties, however, are simply spread too thin to be able to counter such activities with confidence.

The Islamic State has lost many key positions during the recent conflicts, but still retains heavily fortified positions in Hawlija, al Tabqah, al Bab, and Raqqa, strongholds that the coalition presently does not have the manpower to move against. IS also controls Tal Afar, which is proving to be a sensitive position to attack due to its proximity to the Turkish border. Turkey has stated that it retains the option, and will act on it according to their agenda, to attack and liberate Tal Afar. Turkey also maintains that any major force that attacks Tal Afar may also face the wrath of the Turkish military. In the meantime, they have left the control of Tal Afar to its regional tribal powerbrokers, IS strongmen, and proxy agents that fall into familiar non-secular adherences.

How did we get here?

The fight for Raqqa began in March, 2013, when Islamist jihadists from al Nusra Front (al Qaeda in Syria), and other groups (including the US supported Free Syrian Army) overran government loyalists and seized the central square, pulling down the statue of former president Hafez al-Assad. Raqqa was declared to be under their control. Two months later, Sharia court would be established, with Raqqa as the official headquarters of then referred to ISIS. IS then decimated all opposition, quickly pushing any left alive out of Raqqa. The Christian population, estimated to be as much as 10%, largely fled the city.

By January of 2014, IS had taken complete control of Raqqa. Alawites, a sect of Shia Islam that Syrian President Bashar al-Assad adheres to, were publicly executed, and the city’s Shia mosques and Christian churches were destroyed. One such church, the Armenian Catholic Church of the Martyrs, was reportedly converted into an IS headquarters. By November 2015, IS had planned and carried out attacks against multiple targets in Paris. The French responded by dropping approximately 20 bombs on multiple targets around the city. Throughout this time, reports emerged of civilians attempting to regain control of neighborhoods unsuccessfully. IS henchmen responded by reportedly carrying out mass public executions.

Recently, US and Russian airstrikes have intensified and ravaged the civilian infrastructure of Raqqa, cutting off water and power to large parts of the city. Such strikes have resulted in the deaths of only a handful of senior Islamic State militants. One of the militants was Wael Adel Salman al-Fayad, also known as Abu Mohamed Furqan, a man the Pentagon reports was killed in a targeted bombing carried out by the US in early September. Fayad had been a key figure in the Islamic State’s production of gruesome videos depicting the mistreatment and slaughter of prisoners.

Earlier this week, Secretary Carter met with a number of coalition affiliated defense ministers in Paris, laying out the latest strategy for the invasion of Raqqa. A press conference was held to report on the anticipated invasion, provided the Mosul campaign proceeds as planned. However, the US was quick to point out that while there is a need to commit to the removal of IS from their de-facto capitol, the situation remains complicated by regional political sensitivities that have not been a factor in the fight for Mosul.

The primary problem with any operation is that the US and its allies are struggling to find battle-ready, local Arab forces to join the fight, without relying too heavily on Kurdish militias that have been crucial in the battle for Mosul. Adding to complications, an existing power dynamic had come together in Iraq to form a coalition of the willing to fight the Islamic State. In Syria, no such coalition exists.

A NATO ally and key member of the anti-Islamic State coalition, Turkey vehemently objects to the use of Kurdish fighters, the Kurds being a long time foe of Ankara. Turkey recently launched its largest airstrike campaign in decades against the People’s Protection Units, or YPG, the same Kurdish militia the US considers to be the most effective fighting force against ISIS in Syria. Turkey reported through their state-run press service, the Anadolu Agency, that the airstrike had killed between 160 and 200 YPG fighters just north of Aleppo.

Undeterred by Turkish objections, US Army Lt. Gen. Stephen Townsend stated at a Pentagon press conference on Wednesday that Kurdish YPG would be part of the Raqqa campaign. General Townsend also expressed a “sense of urgency” over the operation citing that intelligence indicates IS is using Raqqa as a staging ground for operations moving forward. According to Townsend, “We know they are plotting something … [t]he only force that is capable on any near term timeline are the Syrian Democratic Forces, of which the YPG are a significant portion.” Townsend said that reaching a deal with Turkey was “tough” but at the same time, “We’re going to go with who’s willing to go soon.”

Most analysts agree that a cohesive battle plan and coordination of ground forces will be a challenge. The YPG would seek to approach from the Kurdish strongholds of Syrian cities Kobani and Manbij.

Foreign Minister Mevlut Cavusoglu, among others from the Turkish government, has stated on multiple occasions that cooperating with the YPG in its advance on Raqqa would endanger the future of Syria and would not be in Turkish interests. At a press conference held several hours after General  Townsend’s address, Turkish Foreign Minister Cavusoglu stated that the Turkish government has to give approval to any group participating in the offensive on Raqqa, and they have explicitly ruled out any involvement by the PKK or the YPG. He went on to say that “if you consider the PKK and YPG to be local forces, we would not grant it.”

Some European leaders have expressed concern that the effort to take Raqqa has not yet begun, and that delay will allow extremists to continue planning and carrying out the type of attacks that hit France and Belgium last year. Earlier in October, IS made a big show of their ongoing public executions. Two men were beheaded and crucified, their bodies left on public display. Reports of torture and executions, with little reason given, are plentiful from the Islamic State capital. Meanwhile, critical resources available to civilians are quickly diminishing. Time appears to be running out for IS and the people of Raqqa.

Follow Lima Charlie for up-to-date news on the region and the Raqqa Offensive.

John Sjoholm is Lima Charlie’s Middle East Bureau Chief, and the founder of the consulting organization Erudite Group. He is a seasoned Middle East connoisseur, with a past in the Swedish Army’s Special Forces branch and the Security Contracting industry. He studied religion and languages in Sana’a, Yemen, and Cairo, Egypt. He lived and operated extensively in the Middle East between 2005-2012 as part of regional stabilizing projects, and currently resides in Jordan.