The sports media descended on Lucas Oil Stadium in downtown Indianapolis this past week to watch athletes who play their sport in helmets and shoulder pads do drills in their underwear. 335 of the best college football players are vying to be one of the 224 draft picks this April, and the NFL Combine is their interview.

Players have trained for 8-10 weeks to perform drills that will total less than 5 minutes. The margin for error is razor thin. A good performance can equal millions of dollars. A bad performance can cost millions of dollars, leading them to pursue employment in other less prestigious leagues, or out of football altogether. Make no mistake about it, this weekend was and always will be important.

Despite the spectacle that it is today, the NFL Combine is relatively new. It began in 1982 as a way for teams to gather medical information on potential draftees. Football is a violent sport and owners wanted to make informed decisions. The money has significantly improved, and so has the standardization. Stop watches have given way to electronic timers. Athletes who once just showed up to be evaluated now have private coaches to make them masters of the drills. The standardized battery of drills consists of:

40 Yard Dash – This test is often the highlight of the combine. It is a test of acceleration, speed, and power. Without starting blocks, from a three-point stance, an athlete runs 40 yards, as fast as they can. Split times are taken at the 10 and 20 yard lines. John Ross made history at this year’s combine, as the event’s fastest man. The Washington wide receiver ran a 4.22-second 40-yard dash Saturday, breaking the record* previously held by Rondel Melendez (Eastern Kentucky University), Chris Johnson (Eastern Carolina University), and Marquise Goodwin (Texas) at 4.24 seconds. (*Bo Jackson reportedly ran a hand timed 4.12 at the 1986 NFL combine.)

225 Pound Bench Press – Depending on the athlete, this is a measure of upper body strength or upper body strength endurance. An athlete who completes 5 reps of repetitions has measured his strength. An athlete who completes 25 repetitions has measured his strength endurance. What is being tested can vary depending on the person. With regulation Olympic bar and weights, an athlete lowers the 225 pounds to his chest and raises until arms are fully extended. Current record holder: Justin Ernest (Eastern Kentucky University) at 51 repetitions.

Vertical Jump – This is a test of explosiveness and overall power. From a stand still, the athlete jumps from both feet as high as he can and reaches to touch the highest vane on the Vertec apparatus. Current record holder: Gerald Sensabaugh (North Carolina) at 46 inches.

Broad Jump – This is a test of explosiveness and power that measures how far the athlete can jump. From a stand-still, the athlete jumps from both feet forward. Current record holder: Byron Jones (Connecticut) at 12 feet, 3 inches.

3 Cone Drill – This drill measures agility and change of direction at speeds a bit higher than the below 20 yard shuttle run. The athlete starts at cone 1 goes 5 yards to cone 2 and back. He then turns and runs around cone 2, then weaves around cone 3, curls back around cone 2 and back to the starting point. Current record holder: Jeff Maehl (Oregon) at 6.42 seconds.

Watching great athletes run really fast is interesting, but how does a combine performance predict success in the NFL? A 2011 study used collegiate performance, the 40 yard dash, 20 yard shuttle, 3 cone drill, and vertical jump to compare it against NFL success over the first four years of player’s career. The researchers wanted to find if a good showing at the combine could ensure enshrinement in Canton, Ohio in the Pro Football Hall of Fame.

They found that the largest predictor of success at the NFL success was collegiate success.

A look at the record holders demonstrates that mastering the combine drills doesn’t always translate on the field. Chris Johnson is a player most fans would recognize, but the others would likely require an internet search.

So, is the combine worthless then? No.

The Curious Case of Clowney

It was great combine because he performed well against his peers at defensive end in almost all the tests. While his showing in the bench press was lackluster, he did well above average in several events. Football requires enormous amounts of general athleticism. Within the four to six seconds of a football play, an athlete might transition between several abilities. An initial power/speed play can quickly become a strength and agility play in just a few seconds. The specific needs of a position matter, but it seems that success in football can be measured by being generally great in a lot of areas. A one trick pony is often easily neutralized in the NFL.

As you tune in to watch this week in the hopes of identifying the next great player on your team, be aware that the combine is only part of the evaluation. Being elite in one area to the detriment of others will make you a combine legend, but that isn’t the goal. The goal is to be a great football player, not to be great at running around in your underwear.

Jason Crutchfield is an active duty U.S. Marine who deployed in support of Operation Iraqi Freedom working with Afghan National Security Forces, before deploying in support of Operation Enduring Freedom. In 2012, he transferred to Headquarters and Headquarters Squadron, MCAS Yuma, and then Programs and Resources where he currently serves. Having completed his Master’s Degree in Exercise Science: Performance Enhancement & Injury Prevention, at the California University of Pennsylvania, Capt. Crutchfield is an expert in exercise training, strength & conditioning. On the topic, Capt. Crutchfield has written for the Marine Corps Gazette and he hosts a regular podcast educating service members on new developments in health & fitness. Follow Capt. Crutchfield on Twitter @JCrutchfieldLC 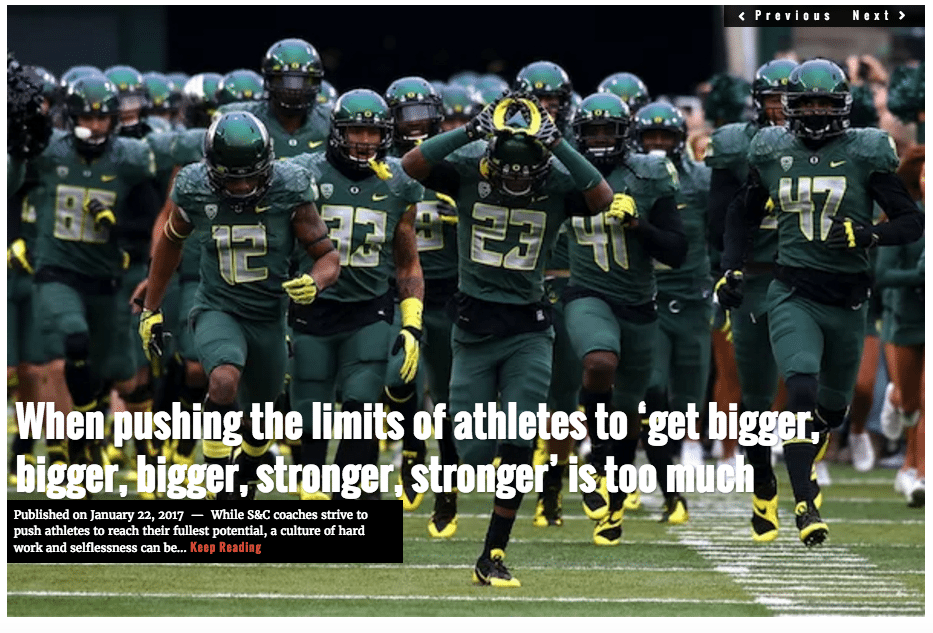