On Tuesday, both China and North Korea warned the U.S., South Korea and Japan of the possible repercussions, with China warning of “a vicious cycle that could spiral out of control,” and North Korea warning, “our army will launch merciless ultra-precision strikes from ground, air, sea and underwater.”

What were some of the key incidents leading to this recent escalation?

In December, President Trump broke with political norms when he accepted a phone call from the president of Taiwan. When questioned about taking the call Trump said that he didn’t see why the U.S. had to be bound by the One-China-Policy, a diplomatic acknowledgement of China’s position that Taiwan is a breakaway province, and the avoidance of formal ties with the island. “I don’t want China dictating to me and this was a call put into me,” said Trump. “I don’t see why we have to be bound by a One-China-Policy, unless we make a deal with China having to do with other things including trade.”

China responded to the call by buzzing Taiwanese positions and deploying an aircraft carrier. After Trump’s inauguration, China deployed nuclear ICBMs capable of striking anywhere within the U.S..

@chrislhayes Need to refocus away from the Trump joke of the day to real news –
Say Hello to China's ICBMs ! pic.twitter.com/kcqbXRLMZ1

Early in February, President Trump walked back his comments on the One-China-Policy during a phone call with Chinese President Xi Jinping. The Chinese responded positively to the move, calling the two nations “co-operative partners.” But the U.S.-China relationship would be tested further by the events of this last week.

This last month has seen unstable international relations for the North Koreans, with the assassination of Kim Jong Nam, the half brother of North Korea’s leader, killed in Kuala Lumpur International Airport. This has resulted in escalating tensions between the two countries, culminating with announcements that both nations would be preventing each other’s citizens from leaving their countries, and the North Korean Embassy in Malaysia started burning documents.

Emergency Destruction at an Embassy usually an indicator of war/break relations. Here Pyongyang potentially abducting all Malaysians in NK https://t.co/sernHfus4Y

The Chinese government responded to the assassination by adding 1,000 troops to the border with North Korea.

Last month China also announced the suspension of all coal imports from North Korea until the beginning of 2018, a major support since the economic collapse of the Democratic People’s Republic of Korea in the late 1990s. The announcement was made days after North Korea detonated an improved nuclear device delivery system on February 12 in the form of an intermediate-range ballistic missile, the Pukguksong-2. The official reason given was that China is moving to further implement the November 2016 UN Security Council resolution to impose further sanctions on North Korea. 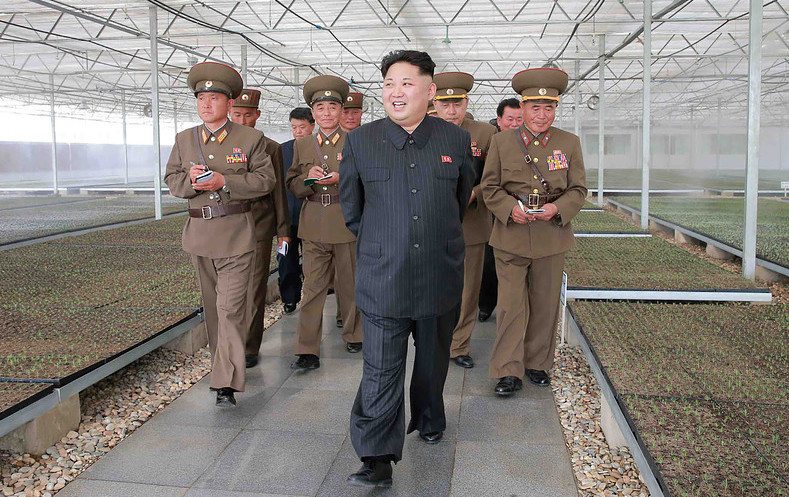 Last week, the U.S. deployed surface to air missile defense weapons to South Korea. The Terminal High Altitude Area Defense (THAAD) interceptors, developed in response to the SCUD missiles used by Iraq in the First Gulf War, use kinetic force to destroy ballistic missiles, instead of explosives, to avoid scattering potentially dangerous ordinance. THAAD has never been used in combat, and may not be effective against multiple missile launches or strategically placed submarine-launched ballistic missiles.

China immediately expressed disapproval over the deployment of the THAAD system, warning of a nuclear arms race. “The consequences will be shouldered by the United States and South Korea,” said Geng Shuang last week, a spokesman for the Chinese Ministry of Foreign Affairs. Chinese media had been encouraging consumers to boycott South Korean products, and Chinese authorities closed 23 stores owned by Lotte, a South Korean company that turned over land for the deployment of the THAAD system.

These Korean companies may be most vulnerable to a China backlash over Thaad missile system https://t.co/OcsWlAvOlF pic.twitter.com/0pcaipU0Rf

But this week the U.S. has deployed more offensive weapons to South Korea, adding an aircraft carrier strike group, led by the USS Carl Vinson, and missile capable Grey Eagle drones. On Tuesday, Aegis warships from the U.S., South Korea and Japan began exercises intended to improve their capability to shoot down enemy ballistic missiles, the U.S. Navy said in a statement.

The U.S.,@ROK_Navy and Japan navies team up for a missile defense exercise. #PartnershipMattershttps://t.co/UxwXkk5J40

According to North Korea’s Korean Central News Agency, in a statement issued by Pyongyang, it accused the U.S. of preparing a “preemptive strike,” warning “If they infringe on our sovereignty and dignity even a bit, our army will launch merciless ultra-precision strikes from ground, air, sea and underwater.” 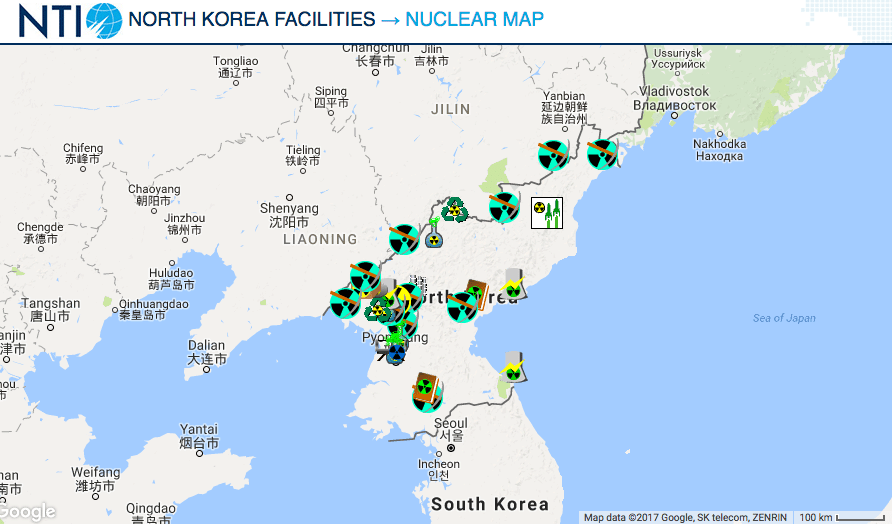 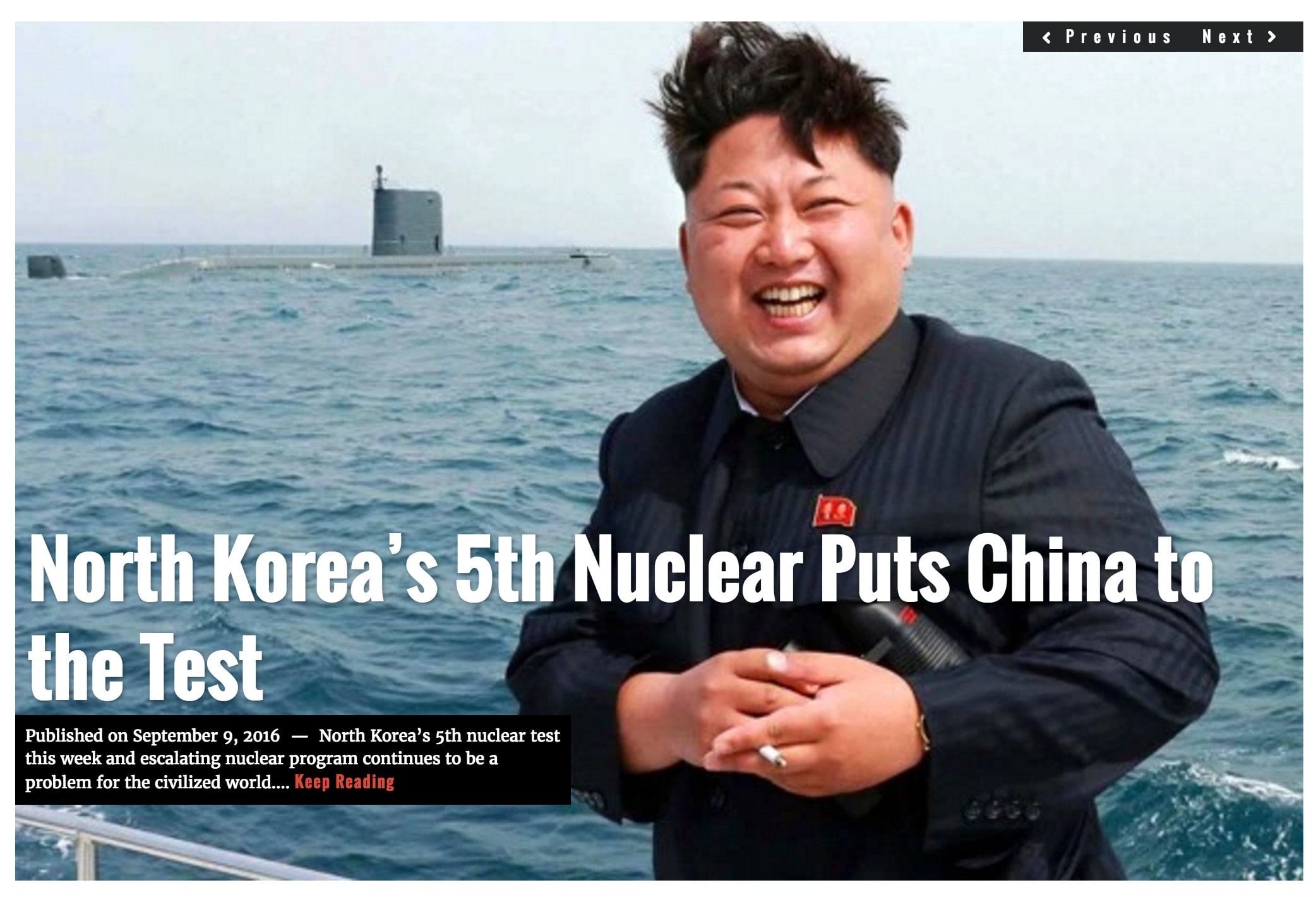