Charlottesville, Virginia – Amid 3 dead and over a dozen injured after violence erupted and a man drove a car into a crowd of protesters, Virginia Governor Terry McAuliffe told white supremacists and neo-Nazis, “Go home. You are not wanted in this great commonwealth. Shame on you.” His impassioned speech urged members of the Unite the Right rally, along with neo-Nazis and white nationalists to “go home, and never come back. Take your hatred, and take your bigotry. There is no place.”

The Governor had earlier declared a state of emergency.

Below is the Governor's statement regarding the emergency declaration he authorized this morning: pic.twitter.com/yS1E9mispG

The president avoided mention of neo-Nazis or white supremacists. His press conference followed an earlier tweet that same day: 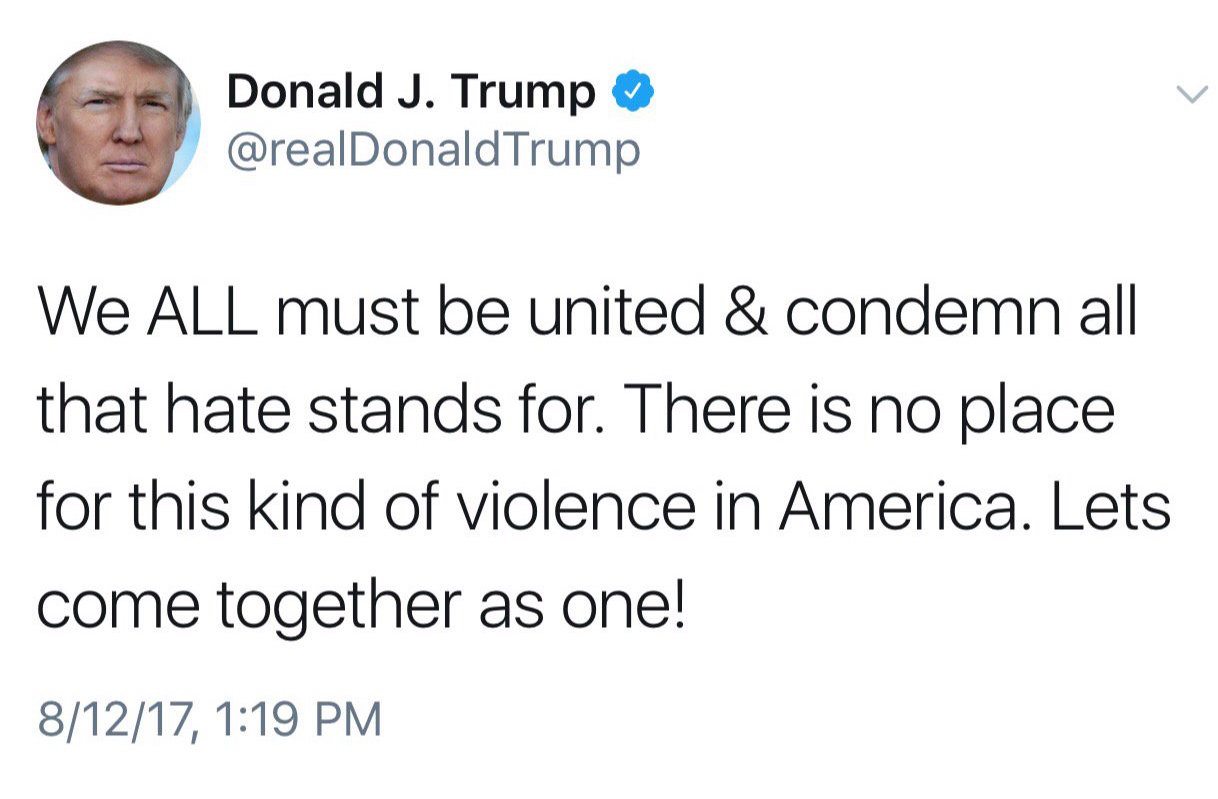 Governor McAuliffe was praised for his more direct approach:

“And I have a message to all the white supremacists and the Nazis who came into Charlottesville today. Our message is plain and simple. Go home. You are not wanted in this great commonwealth. Shame on you. You pretend that you’re patriots, but you are anything but a patriot. You want to talk about patriots, talk about Thomas Jefferson and George Washington who brought our country together. Think about the patriots today, the young men and women who are wearing the cloth of our country. Somewhere around the globe they are putting their life in danger. They’re patriots. You are not. You came here today to hurt people. And you did hurt people.

But my message is clear, we are stronger than you. You have made our commonwealth stronger. You will not succeed. There is no place for you here, there is no place for you in America. We were here today to bring people together to unify folks. I remind you all that we are a nation of immigrants. Unless you are Native American, the first ships that came to Jamestown Virginia in 1607, and since that time many people have come to our great country to unite us. Our diversity, that mosaic tile of immigrants is what makes us so special. And we will not let anyone come here and destroy it.

So please, go home, and never come back. Take your hatred, and take your bigotry. There is no place. And if I can give you a piece of advice, use your time and energy to help people.”

There's no place in Virginia for hatred & bigotry. People who've come to VA today to hurt others are not patriots, they are cowards. Go home pic.twitter.com/HRESFfFAxN

President Trump has faced criticism for failing to directly call out white supremacists by name, including that of former KKK Grand Wizard David Duke, who has continued to voice support of the President.

David Duke today in #Charlottesville talking how how the hate rally "fulfills the promises of Donald Trump." pic.twitter.com/nvldJpykvA

The founder of the Daily Stormer, a neo-Nazi and white supremacist website, praised the President’s response in an article titled “‘Hate on Many Sides’: CNN is Pissed Trump Didn’t Denounce White Nationalism'”:

“He outright refused to disavow. People saying he cucked are shills and kikes. He did the opposite of cuck. He refused to even mention anything to do with us. When reporters were screaming at him about White Nationalism he just walked out of the room.”

Former Presidents Bill Clinton and Barack Obama weighed in, while numerous politicians and members of Congress denounced the Unite the Right rally and ensuing violence.

Even as we protect free speech and assembly, we must condemn hatred, violence and white supremacy. #Charlottesville

"No one is born hating another person because of the color of his skin or his background or his religion…" pic.twitter.com/InZ58zkoAm

Mr. President – we must call evil by its name. These were white supremacists and this was domestic terrorism. https://t.co/PaPNiPPAoW

We should call evil by its name. My brother didn't give his life fighting Hitler for Nazi ideas to go unchallenged here at home. -OGH

This display of hate in #Charlottesville is disgusting. Our nation's strength comes from our values of diversity and inclusion https://t.co/HdovJskOxy

The white nationalist demonstration in #Charlottesville is a reprehensible display of racism and hatred that has no place in our society.

Our hearts are with today's victims. White supremacy is a scourge. This hate and its terrorism must be confronted and defeated.

Gainesville, Florida [LC] Hundreds of protesters gathered outside a lecture