Lima Charlie News caught up with Academy Award nominated director Matia Karrell on her upcoming project ‘FlyGirls’ a compelling series about the first women pilots who flew for the Army Air Corps during WWII, known as WASP.

If you have no idea who the WASP of WWII are than you are, unfortunately, not alone. If you did not know that over 1,000 American female pilots flew every type of plane for the Army Air Corps during WWII, or that their epic achievements remained classified for over 30 years, then you’re also not alone.

Academy Award nominated director, Matia Karrell, had this very lack of awareness in mind when she was inspired to start developing her upcoming project, FlyGirls, an epic ten-part miniseries portraying the untold story of America’s first team of women Army Air Corps flyers.

“My interest in FlyGirls began when I discovered a photograph of my mother dressed in military uniform,” said Matia when asked about the film’s inspiration. Matia’s mother had passed away, and had never spoken to Matia about her service. Inspired to find the truth behind the photograph, she researched tirelessly to find out from what service or unit the uniform originated. Her search led her to the Massachusetts Women Defense Corps, a group of women who had volunteered providing war-related and emergency services to citizens during WWII. This included being air raid wardens, namely, plane spotters.

Matia was inspired by her mother’s service and decided to dig deeper into how women directly served their country during World War II. What she found was something that she never knew – women were not only watching the skies for planes, they were flying them. 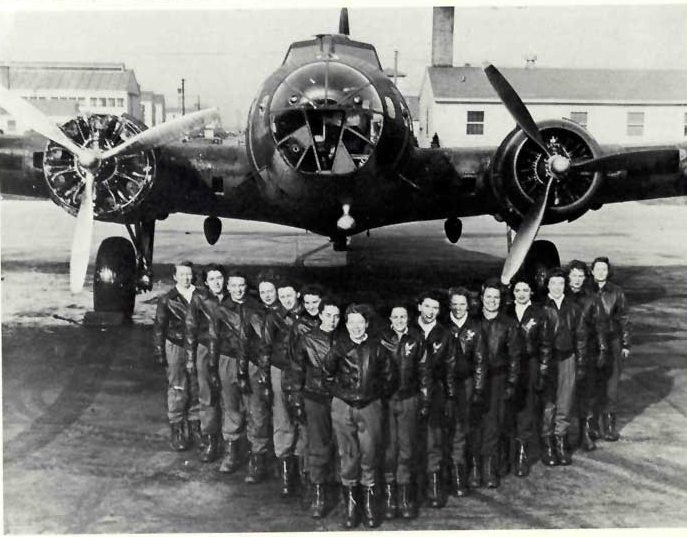 What Matia found out in her journey to learn about her mother, was that in 1938, as the threat of Nazi Germany loomed on America’s horizon, the United States was dangerously short on aircraft and pilots, and was no match for the ever growing German Luftwaffe. A massive mobilization had to be initiated. There were simply not enough able pilots. The idea that women could be trained to pilot military aircraft so male pilots could deploy to combat duty was considered. At that time it wasn’t even the norm for women to drive cars, let alone fly planes.

FDR assigned the task of building America’s Air Force to General Henry “Hap” Arnold. The decision to roll the dice on a controversial new program would begin with him. Yet, General Arnold was not convinced, “whether a slip of a girl could fight the controls of a B-17 in heavy weather.”

It would take the raw grit and perseverance of a thirty-something female pilot named Jackie Cochran, and a proposal: if Cochran led 25 American women pilots across the ocean and they proved themselves flying for the British, then the U.S. military would consider her plan to train and use female pilots back home. It would be “the Grand Experiment.” A story for another article, the courageous efforts of Cochran and her team would bring General Arnold to eventually conclude, “now in 1944, it is on the record that women can fly as well as men.”

What they have in common is memorable characters who are courageous and strong, flawed and scared.

FlyGirls is told through the eyes of four main characters, Jackie Cochran, Helen Richey, Kathy Stevenson and Ann Wood. It is based on exclusive rights to their memoirs, personal diaries and books.

America in 2016 finds that women still have to fight for equality. The fight for equal opportunity, pay, and respect from male counterparts, and from society, remains. The next President of the United States has said that, “Putting a wife to work is a very dangerous thing.” In the America of the 1940’s, equality for women was categorically worse, and despite this, the WASP seized an extraordinary opportunity to break free of societal pressures and expectations to literally soar in the sky.

FlyGirls is their untold story. 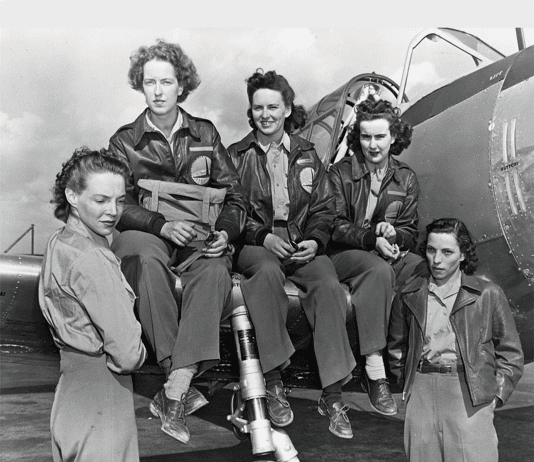 Creator/Director Matia Karrell told us, “In my 25 years as a filmmaker and writer I have come to understand that storytelling has the power to humanize. We tell stories to give voice to those who have none. Uncovering our history forces us as a nation to confront things that at the time we didn’t want to deal with.” Karrell adds that in America, “We preferred to have the myth, ‘a women’s place’, ‘the delicate gender’ … but the contribution to our war effort was not made by just a few people or a select group, it was made by both men and women across this nation and around the world. Many who have been forgotten or denied their rightful place in our history will now be remembered.”

FlyGirls producer Hilary Prentice acknowledged that before she met Matia, she had no idea women flew airplanes for the military in WWII. “I was a History major at one of our nation’s leading academic institutions. I knew about color barriers in the military at that time, and the Tuskegee airmen. I knew about the Navajo code talkers and other American Indian contributions to the military service, but I had never heard the stories of the women who sacrificed their lives as pilots in service of this country during WWII. Immediately I wanted to help Matia change that by bringing their story into homes across America and across the world.”

Hilary comes from a family of distinguished veterans who served during WWII. Three of her uncles and both of her grandfathers served, where her paternal grandfather was a navigator in the USAFF, and her maternal grandfather was awarded the Purple Heart. Hilary added, “Why does their story move me to tears? I have the utmost respect for women and men in the service because they are willing to sacrifice their lives for complete strangers – for you and for me. However, these female pilots never received any recognition or medals — until much later in 1977 when they were first granted status as veterans, and then in 2010 when they were finally awarded The Congressional Gold Medal. They put their lives on the line and they didn’t ask for anything in return.”

Uncovering our history forces us as a nation to confront things that at the time we didn’t want to deal with.

WASP pilots logged more than 60 million miles delivering new planes, flying planes towing targets for training exercises (with live ammunition), testing newly overhauled planes, breaking in new engines, instructing male cadet pilots, simulating bombing and strafing runs, and transporting government officials. However, since they weren’t considered military personnel by the U.S. Armed Services, when a female pilot died performing these tasks, the military was not required to pay for her remains to be sent home, or for her funeral. So her fellow women chipped in to cover those costs.

Both Matia and Hilary agree that “Fly Girls” beat down barriers, moving women closer towards shattering the glass ceilings put before them, and that now, more than ever, their stories must be told. As countless motion pictures have achieved telling the human story of men at war, FlyGirls seeks to do the same, bridging a critical gap of understanding as one of the first television series to focus on America’s first female pilots.

“What they have in common is memorable characters who are courageous and strong, flawed and scared,” Matia states. “Narrative storytelling can humanize a time in history, making that era come alive for audiences. It is by experiencing characters’ lives through their eyes that makes us cry, laugh, or even scream back at the screen. This is palpable storytelling. This is what I want for FlyGirls.”

FlyGirls is produced by The Red Door Films, and is currently in its 2nd phase of fundraising. As you celebrate Veterans Day this year and wonder what you can do to help veterans, we recommend that you click here and donate to the very worthy cause that the producers of FlyGirls have taken upon themselves – telling the incredible story of the Women Air Force Service Pilots of World War II. 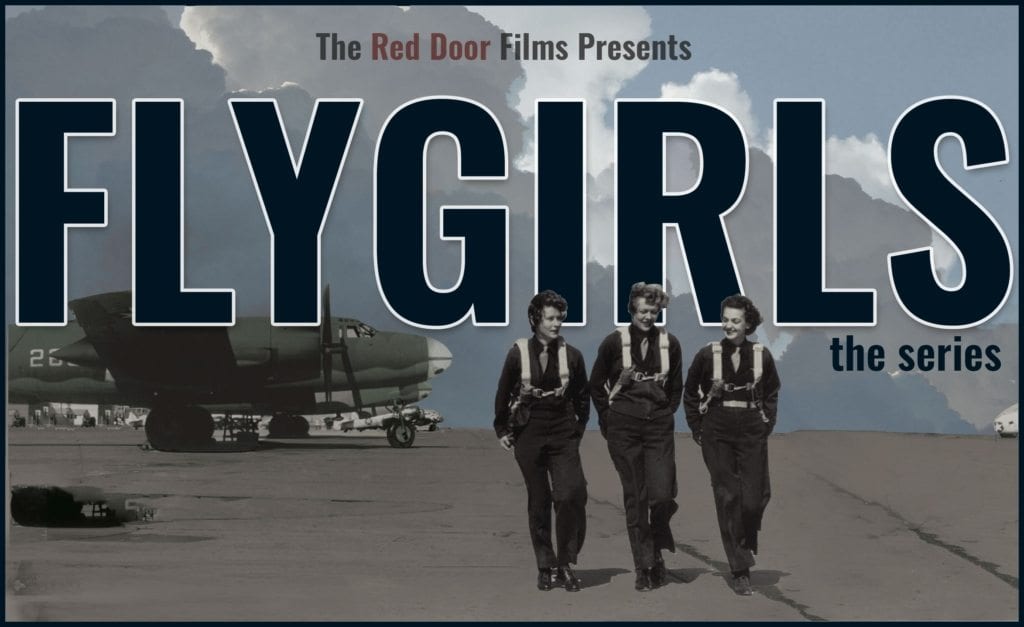 Stay tuned for Part 2 of Lima Charlie News coverage of FlyGirls and the women that inspired the creation of the WASP.

By Mario Figueroa, with Pam Campos-Palma and Anthony A. LoPresti, Lima Charlie News

Mario Figueroa is a former Marine Corps Infantryman who deployed in support of Operation Iraqi Freedom II. Following his service, Mario completed his B.A. in English Literature at Columbia University in the City of New York. While completing his studies, Mario served on the Executive Board of The US Military Veterans of Columbia University while also working as Director of Veteran Services for United War Veterans Council, a veterans centric non-profit dedicated to honoring service and helping veterans transition back into the civilian world. Follow Mario on Twitter @MFigueroaLC

Pam Campos-Palma served as a geopolitical Intelligence Analyst in the United States Air Force for a decade where she specialized in strategic analysis, counter-violent extremism, and international affairs. Pam has been featured on NBC, CNN, BBC, and Huffington Post and is vested in addressing issues of international peace & security, and migration with an intersectional gender lens. Pam graduated from NYU with a Master of Public Administration focused in International Policy and Management and has served as an international consultant to projects in South Africa, Guatemala, and Honduras. Follow Pam on Twitter @PamCamposLC