Last week Japanese aerospace startup ispace set a record for fundraising by a commercial space exploration company raising $90.2 million in its latest (Series A) round of fundraising. This exceeded SpaceX’s highest raise of $12.1 million.

Ispace, competing in the Google Lunar XPRIZE, is seeking to be the first Japanese company to land on the moon.

Ispace predicts that by 2040, the Moon will be inhabited by 1,000 people, “with over 10,000 visitors every year.” In a recent press release it claimed, “infrastructure on the surface will be centered around the Moon’s water resources, supported by a variety of industries including construction, manufacturing, steel, energy, communications, transportation, agriculture, medicine and tourism.”

Japan Aerospace Exploration Agency (JAXA) is also developing a lunar rover but is not expected to complete construction and testing before ispace.

Similar lunar plans are on the books at U.S. venture firms Astrobotic, Moon Express, and Blue Origin. Astrobotic and Moon Express both have plans to launch a lunar lander and bring back samples by 2019-2020. SpaceX’s CEO Elon Musk shared his image in September of a moon base and Mars colony.

Mars City Opposite of Earth. Dawn and dusk sky are blue on Mars and day sky is red.

Lockheed Martin and Boeing, meanwhile have plans to orbit the moon and have partnered with NASA related to the Deep Space Gateway, a space station capable of moving between Earth and the moon as a staging platform for human missions to Mars in the 2030s.

Back in September of this year, at the 68th International Astronautical Congress in Australia, the US and Russia announced that NASA and Roscosmos, Russia’s space agency, had signed an agreement on the “deep space gateway” allowing a starting point for future deep space exploration.

According to a Roscosmos release, both agencies confirmed the intention to use the International Space Station (ISS) as a basis for further exploration of outer space and the Moon, along with the creation of the “near-Earth visited platform Deep Space Gateway”.

According to Robert Lightfoot, NASA’s acting administrator at NASA Headquarters in Washington, “Statements such as this one signed with Roscosmos show the gateway concept as an enabler to the kind of exploration architecture that is affordable and sustainable.”

The US and Russia have expressed interest in a manned mission to Mars within the next 20 years.

The former Soviet Union, China and the US are the only nations to successfully perform soft landings on the lunar surface.

China’s Lunar Exploration Program (CLEP), also known as the Chang’e program after the Chinese moon goddess Chang’e, is an ongoing series of robotic Moon missions by the China National Space Administration (CNSA). In 2013, CLEP released photos of its first moon landing after it sent a rover, called Yutu — Chinese for “Jade Rabbit” — down in one of the largest craters in the solar system, Mare Imbrium. China’s ultimate objective is a manned mission to the Moon, which may occur in 2025–2030.

Last week, President Donald Trump ordered the restoration of the US manned space mission program in a signing ceremony on December 11th (the 45th year anniversary of the last moon landing by Apollo 17 in 1972). This marks a renewal of the US manned space exploration program, which was suspended in 2011, and follows the declarations to return to the moon of both President George H.W. Bush and President George W. Bush (President Obama pushed for Martian exploration).

“It marks a first step in returning American astronauts to the moon for the first time since 1972, for long-term exploration and use,” Trump said during the ceremony at the White House, where he signed Space Policy Directive 1.

“It is America’s destiny to be at the forefront of humanity’s eternal quest for knowledge and to be the leader amongst nations on our adventure into the great unknown,” the president remarked, with Edwin “Buzz” Aldrin, the second astronaut to walk on the moon, standing beside him. “This time, we will not only plant our flag and leave our footprint, we will establish a foundation for an eventual mission to Mars, and perhaps, someday, to many worlds beyond.”

Paraphrasing astronaut Neil Armstrong, the first man to walk on the moon, he continued, “This is a giant step toward that inspiring future and reclaiming America’s proud destiny in space.”

Present in addition to Buzz Aldrin, was Harrison “Jack” Schmitt, who tread the moon’s surface as a member of Apollo 17, the final manned mission to the moon in 1972. The signing ceremony coincided with the day in 1972 that Schmitt’s final moonwalk with Apollo 17 occurred.

The plan is also to “drive the burgeoning domestic space industry” by including the private sector space exploration business into the program.

SpaceX’s Elon Musk tweeted his approval of Trump’s declaration. “It is high time that humanity went beyond Earth. Should have a moon base by now and sent astronauts to Mars. The future needs to inspire.”

It is high time that humanity went beyond Earth. Should have a moon base by now and sent astronauts to Mars. The future needs to inspire. https://t.co/6HjDQnRSA5

Trump has voiced enthusiastic support for the US to return to space exploration in a much more aggressive way.

In March 2017, he approved the first NASA funding authorization since 2011, a $19.5 billion dollar plan, announcing a “stepping stone approach to exploration,” with the ultimate goal of having manned missions to Mars. NASA was ordered to come up with an “initial exploration roadmap” due to be delivered in December 2017.

A follow-up executive order in June 2017 re-established the National Space Council and named Vice President Mike Pence as head of the effort.

During the ceremony on Monday, Trump invoked the memory of the nation’s pioneers, comparing the new program to their efforts, stating that, “Today the same spirit beckons us to begin new journeys of exploration and discovery; to lift our eyes all the way up to the heavens and once again imagine the possibilities waiting in those big beautiful stars if we dare to dream big.”

Questions continue to arise as to whether a stop at the moon makes any practical sense for a Mars (and beyond) landing.

Questions also persist as to the ability of man to survive the many hazards of deep space and prolonged exposure to, among other things, cosmic radiation and weightlessness. 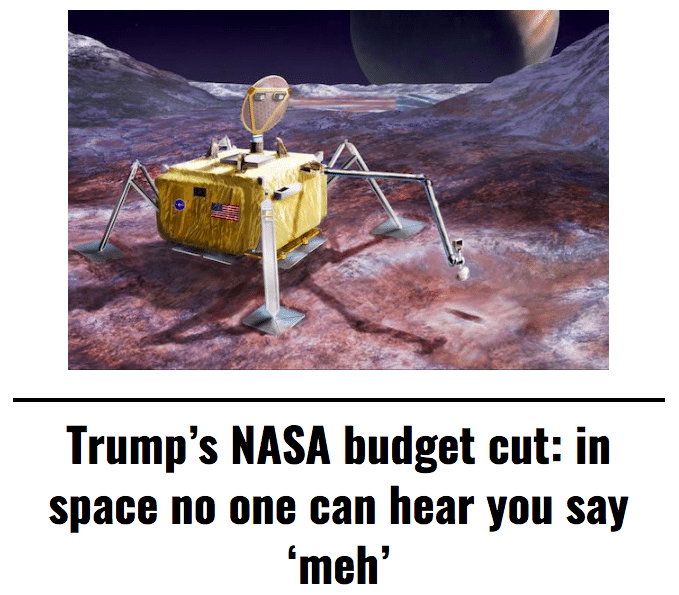