Relative to other agencies NASA’s budget cuts under the Trump proposal may not seem dire, but for an agency tasked with “increasing understanding of the universe and our place in it” any cut is unacceptable.

So cutting what some may deem unnecessary, or in the least, not a priority, can include space exploration. In a world where the U.S. military spent $20 billion on air conditioning tents and temporary structures, more than NASA’s entire annual budget, Americans may respond with “meh”. In fact, many consider NASA having dodged a bullet with a budget that is a 0.4 percent increase from President Obama’s 2017 proposal. Nevertheless, for an agency that “is responsible for increasing understanding of the universe and our place in it, advancing America’s world-leading aerospace technology, inspiring the Nation, and opening the space frontier,” any cut to NASA that sets back that mission is, in our opinion, too much.

This week NASA’s acting Administrator Robert Lightfoot issued a statement addressing the proposed budget’s impact on its operations. According to Lightfoot, “The President mentioned in his speech to both houses of Congress that, ‘American footprints on distant worlds are not too big a dream.’ NASA is already working toward that goal, and we look forward to exciting achievements that this budget will help us reach.”

Lightfoot ends his statement, “As with any budget, we have greater aspirations than we have means, but this blueprint provides us with considerable resources to carry out our mission, and I know we will make this nation proud.”

While appearing chipper, a deeper look may suggest otherwise.

While NASA reports that the budget “reinvigorates robotic exploration of the Solar System by providing $1.9 billion for the Planetary Science program,” funds for the anticipated Europa moon landing would be cut.

Europa is a moon of Jupiter covered in a sheet of ice. Europa Report is a 2013 sci-fi film that had a budget of less than $10 million, received generally positive reviews, and scored an 80% “Certified Fresh” rating from Rotten Tomatoes. Europa the icy moon, was discovered by Galileo and is the sixth largest moon in the solar system. But here’s the kicker – it has a “tenuous” atmosphere composed primarily of oxygen, and a salty liquid water ocean beneath its surface that could conceivably harbor extraterrestrial life.

NASA’s Europa Clipper is a plan for a satellite launch in the 2020s to explore the moon. The spacecraft will arrive at Jupiter after a multi-year journey, and orbit it every two weeks for a series of 45 close flybys of Europa. The Europa Lander (article main image) is a proposed landing that would have gone on the first or following missions. The mission would include an effort to determine if the ocean under the ice is habitable. Under the Trump budget proposal, this has been nixed. Instead, the budget only allows for a flyby.

The new budget essentially forces a redistribution of NASA’s budget. Funding for the Europa Clipper would come as part of a 20.1 percent increase for NASA’s Planetary Science division.

Another program facing cuts is the Asteroid Redirect Mission, a plan to place asteroids into orbit around the moon, where they could be studied by astronauts. The mission would also “demonstrate planetary defense techniques to deflect dangerous asteroids and protect Earth if needed in the future.” Hint: Armageddon, a film with a $140 million budget.

Even more interesting, according to NASA, “most importantly, NASA’s Asteroid Redirect Mission will greatly advance NASA’s human path to Mars, testing the capabilities needed for a crewed mission to the Red Planet in the 2030s.” This would finally answer Matt Damon’s great question, can we grow potatoes on Mars?

The program has faced prolonged scrutiny from Congress. NASA appears to be taking this cut in good spirits. According to acting Administrator Lightfoot:

“We remain committed to the next human missions to deep space, but we will not pursue the Asteroid Redirect Mission (ARM) with this budget. This doesn’t mean, however, that the hard work of the teams already working on ARM will be lost. We will continue the solar electric propulsion efforts benefitting from those developments for future in space transportation initiatives. I have had personal involvement with this team and their progress for the past few years, and am I extremely proud of their efforts to advance this mission.”

Coming back to Earth, the budget proposal would not affect NASA’s commercial partnerships, including plans by SpaceX and Boeing to send astronauts into low orbit. Inside the atmosphere, NASA’s Aeronautics program, for developing aircraft, will drop by 26.6 percent, and environmental science studies will be cut. In cyberspace, NASA is confident that the budget “strengthens NASA’s cybersecurity capabilities, safeguarding critical systems and data.”

But by far the worse budget cut is to the Office of Education ($115 million). It will disappear entirely. Over the years OE has provided countless education projects, internships, scholarships and fellowships, for America’s young future scientists. There was even an Astro Camp!  Many also wonder what will happen to NASA Kid’s Club, where, in addition to educational games, you can find out who is on the International Space Station. 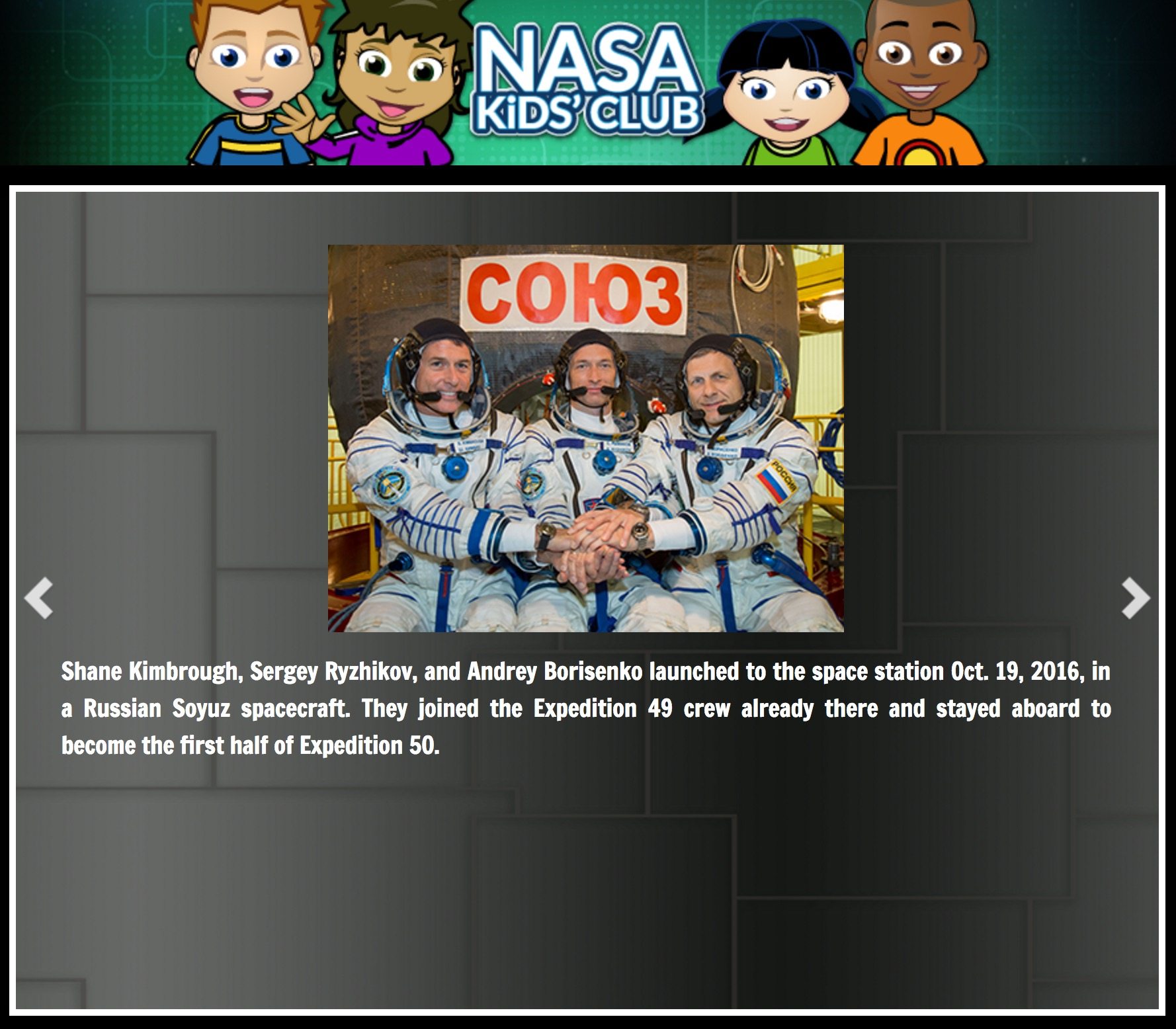 According to NASA, the dissolution of OE will result in “a more focused education effort through NASA’s Science Mission Directorate.” NASA states that the department was performing functions “duplicative of other parts of the agency” anyway.

“While this budget no longer funds a formal Office of Education, NASA will continue to inspire the next generation through our missions and channel education efforts in a more focused way through the robust portfolio of our Science Mission Directorate. We will also continue to use every opportunity to support the next generation through engagement in our missions and the many ways that our work encourages the public to discover more.”

Are you in 10th or 11th grade? Interested in a STEM career? Applications for 2017 NASA SEES Internships due April 4! https://t.co/Uh2nro5wS3 pic.twitter.com/qYBlrU4fD7

What was your reaction when you received the offer to be a NASA intern? Michael was only a little excited. #internships #NASA pic.twitter.com/AAkZBd9oY8

A helpful chart from the Planetary Society gives a more detailed view. 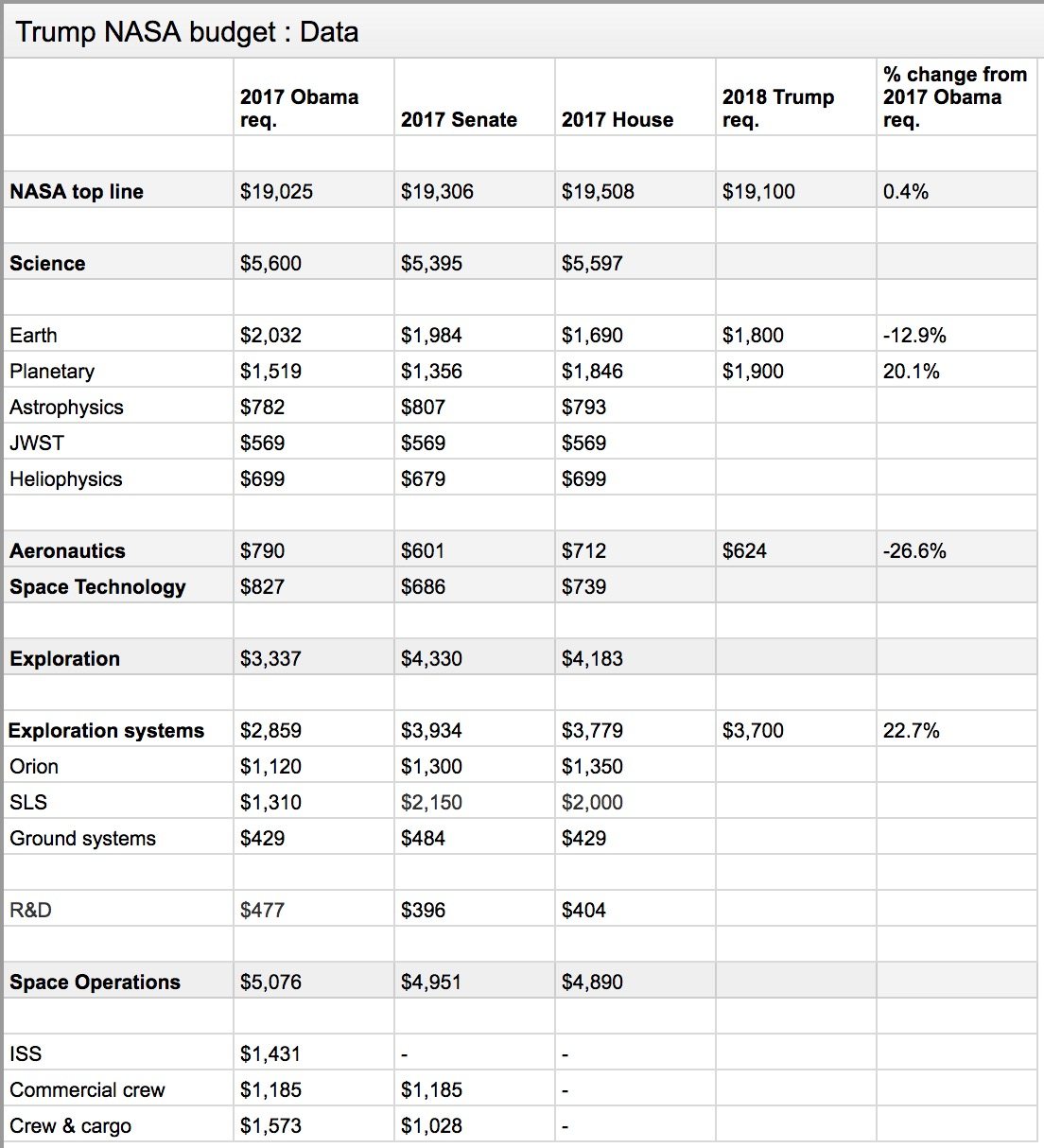 Overall, the proposed budget seems to have NASA’s social media team feeling out of this world.

Apart from NASA, President Trump’s proposed budget seeks spending increases for defense (to $639 billion), Homeland Security (harden the southern border, vis-à-vis, the border wall), and the Department of Veterans Affairs. It proposes numerous cuts to a broad array of programs, including, environmental protection, foreign aid and U.N. funding, agriculture, labor, justice, housing, education, health & human services, energy, transportation, and funding for the arts. Both the House and Senate will weigh in, propose changes, and forward a final version to President Trump for signature.

Below is a summary of key provisions:

Full text of the budget here.