Dmitry Peskov, Russian President Vladimir Putin’s spokesman, has stated that an alleged Trump administration peace plan for eastern Ukraine is “absurd.” As first reported by the New York Times, a plan that would lead to the lifting of sanctions against Russia was formulated by Michael D. Cohen, Trump’s lawyer, Felix H. Sater, a Russian born business associate of Trump’s, and Andrii V. Artemenko, a lawmaker in Ukraine’s opposition party.

The plan called for a withdrawal of Russian forces from Eastern Ukraine, and a referendum to let Ukrainian voters decide whether Crimea, seized by Russia in 2014, should be leased to Moscow for 50 or 100 years. When informed about the plan, according to state news agency RIA Novosti, Peskov remarked, “It is difficult for me to comment because it is not possible to lease something from oneself.”

The Times reported that Cohen had left the proposal in a sealed envelope in the office of then-national security adviser Michael T. Flynn while visiting Trump at the White House, just days before Flynn’s resignation last week. Cohen has admitted that he did attend a prior meeting at a New York hotel last month with Artemenko to discuss a plan, but denied discussing it with the Trump administration or delivering any documents to the White House and/or General Flynn.

The Times has stood by its story that Cohen then delivered the plan to the White House.

In a sudden development today, prosecutors in Ukraine accused Artemenko of conspiring with Russia to commit “subversive acts against Ukraine,” by advancing a proposal that could “legitimize the temporary occupation” of the Crimean peninsula, the New York Times reports. Yuriy Lutsenko, Ukraine’s prosecutor general, posted the charges made against Artemenko today. 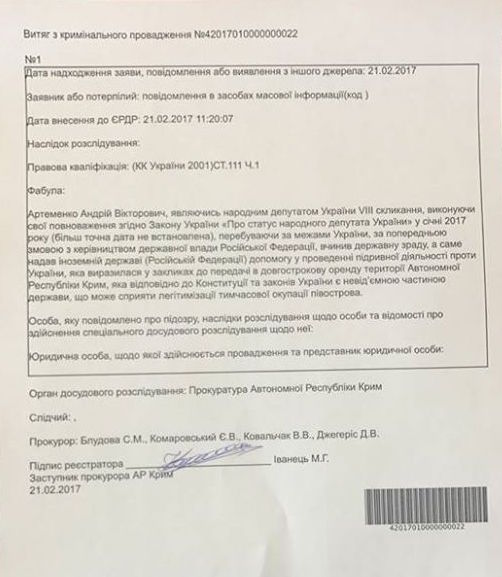 At this weekend’s Munich Security Conference, Vice President Mike Pence said that Russia must be held “accountable” regarding Ukraine and demanded they “honor” the Minsk ceasefire agreement. This rebuke came as a ceasefire in the contested eastern region of Ukraine came into effect on Monday.

Ukrainian military spokesman Col. Oleksandr Motuzyanyk reported that despite the ceasefire, “The intensity of fire was 10 times less, but there were no calm places at the front line.” Since the conflict began, almost 10,000 people have been killed by fighting between the Ukrainian government and separatists.