President Trump’s nominee to head the Department of Education, Betsy DeVos, is in jeopardy as two Republican Senators disapproved of her nomination this week. Senators Susan Collins (R-ME) and Lisa Murkowski (R-AK) broke party alignment in opposition to voice their concerns.

On the Senate floor, Senator Collins said, “The mission of the Department of Education is broad, but supporting public education is at its core. I am concerned that Mrs. DeVos’ lack of experience with public schools will make it difficult for her to fully understand, identify, and assist with those challenges, particularly for our rural schools in states like Maine.”

Following her, Senator Murkowski stated, “I have heard from thousands – truly thousands of Alaskans who have shared their concerns about Mrs. DeVos as Secretary of Education. They’ve contacted me by phone, by email, in person. Their concerns center, as mine do, on Mrs. DeVos’ lack of experience with public education and the lack of knowledge she portrayed at her confirmation hearing. Alaskans not satisfied that she would uphold federal civil rights laws in schools that receive federal funds.” 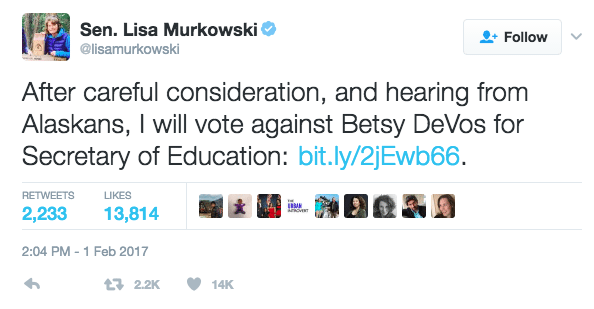 Democratic Senator Tim Kaine (D-VA) voiced his concern stating, “She failed to meet three requirements I consider essential to serving as Secretary of Education – someone who is pro-public schools, pro-accountability and pro-civil rights. Over 90 percent of our nation’s children attend public schools. . . . Mrs. DeVos has said that public schools are a ‘dead end’ and that ‘government really sucks’ when it comes to education. This statement betrays the commitment of thousands of public school teachers who work hard every day in our public schools, many in tough working conditions, to ensure our children are educated.”

Senators Collins, Murkowski, and Kaine are all members of the Senate’s Health, Education, Labor and Pensions (HELP) Committee. Democrats must vote as a bloc and persuade three Republicans to vote with them to prevent Mrs. DeVos from being nominated.

Additional concerns include that DeVos has supported voucher programs and may seek to cut education funding. She also failed to ensure Senators that she would enforce civil rights law in schools, and when asked about gun control on school grounds by Sen. Chris Murphy (D-Conn.), who has been vocal on gun control since the Sandy Hook massacre, DeVos rejected banning guns from schools citing a need to defend against “potential grizzlies.”

Despite lack of support from the Republican Senators, White House Press Secretary, Sean Spicer voiced certainty that Betsy DeVos will still be nominated. “I have 100 percent confidence she will be the next secretary of education.”

On January 9, 2017, 20 of the nation’s governors penned a letter in support stating, “President-elect Trump has made an inspired choice to reform federal education policy and allow state and local policymakers to craft innovative solutions to ensure our children are receiving the skills and knowledge to be successful in the world and modern workforce.”

At the moment, the tally of legislators for and against DeVos stands deadlocked at 50-50. Should the tie remain, the decision would come down to Vice President Mike Pence.

The Senate is expected to vote on DeVos’ nomination early next week.

J David Thompson (US Army) is a Juris Doctor candidate at Washington & Lee University School of Law focusing on International Human Rights Law. He is a Veterans in Global Leadership Fellow, and brings experience on human rights, international relations, strengthening civil society, refugee issues, interagency collaboration, and countering violent extremism. Prior to Washington & Lee, he served in the US Army as a Military Police officer and Special Operations Civil Affairs with multiple deployments to Afghanistan and one to Jordan—receiving a Bronze Star amongst other decorations. In Jordan, David worked at the US Embassy in countering violent extremism, strengthening civil society, and refugee response with other United States Government organizations, the United Nations, and various non-governmental organizations. Follow David on Twitter @JDThompsonLC