The director of the U.S. Federal Bureau of Investigation, James Comey, was fired Tuesday, setting off a firestorm throughout the media, Congress and the internet.

President Donald Trump, in a blunt letter to Comey Tuesday, told him: “I have received the attached letters from the Attorney General and Deputy Attorney General of the United States recommending your dismissal as the Director of the Federal Bureau of Investigation, I have accepted their recommendation and you are hereby terminated and removed from office, effective immediately.”

The president added, “While I greatly appreciate you informing me, on three separate occasions, that I am not under investigation, I nevertheless concur with the judgment of the Department of Justice that you are not able to effectively lead the Bureau.”

Trump to FBI Dir. Comey: "…I nevertheless concur with the Department of Justice that you are not able to effectively lead the Bureau …" pic.twitter.com/f9yGvCd97K

“… I have concluded that a fresh start is needed at the FBI. It is essential that this Department of Justice clearly reaffirm its commitment to longstanding principles that ensure the integrity and fairness of federal investigations and prosecutions. The Director of the FBI must be someone who follows faithfully the rules and principles of the Department of Justice and who sets the right example for our law enforcement officials and others in the Department. Therefore, I must recommend that you remove Director James B. Comey, Jr. and identify an experienced and qualified individual to lead the great men and women of the FBI.” 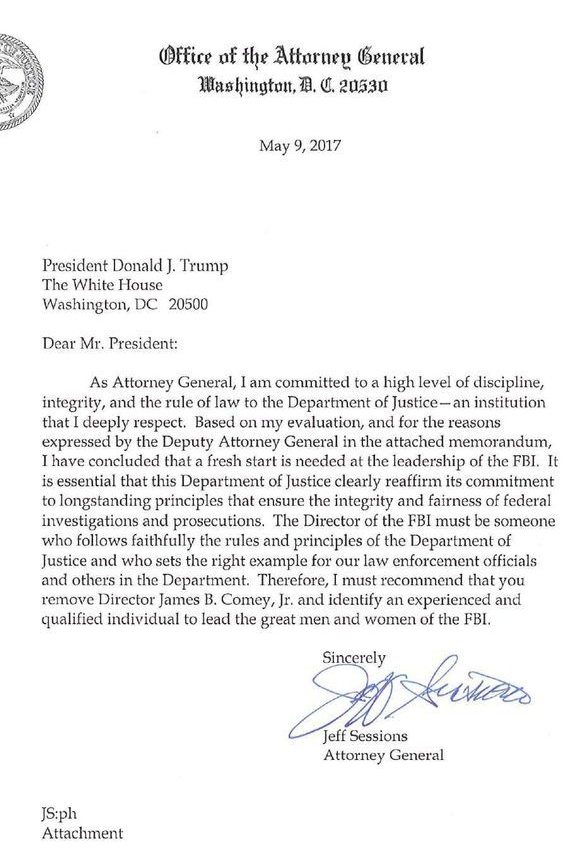 Director Comey had been speaking to a group of FBI employees in California when he learned he had been fired. Media reports say he saw mention of his dismissal on TV screens but initially thought it was a prank.

The Trump administration’s position is that Comey’s dismissal was the result of his handling of the investigation into Democratic nominee Hillary Clinton’s email server. Democrats have rejected that explanation suggesting Comey was fired for his ongoing investigation of Russia’s interference with the 2016 election and a possible Trump-Russia connection, and that Trump was trying to shut down the FBI Russia investigation. Democrats have demanded that a special prosecutor be appointed.

Some of Trump’s fellow Republicans, including Sen. John McCain, called his dismissal of Comey troubling. Tuesday night before a group at the Munich Security Conference, McCain stated, “This scandal is going to go on. I’ve seen it before … This is a centipede. I guarantee you there will be more shoes to drop, I can just guarantee it. There’s just too much information that we don’t have that will be coming out.”

Today, in a letter to the Inspector General of the Justice Department, House Oversight Chairman Jason Chaffetz requested that the department expand the scope of its review “to include the facts and circumstances surrounding the removal of Director Comey.” 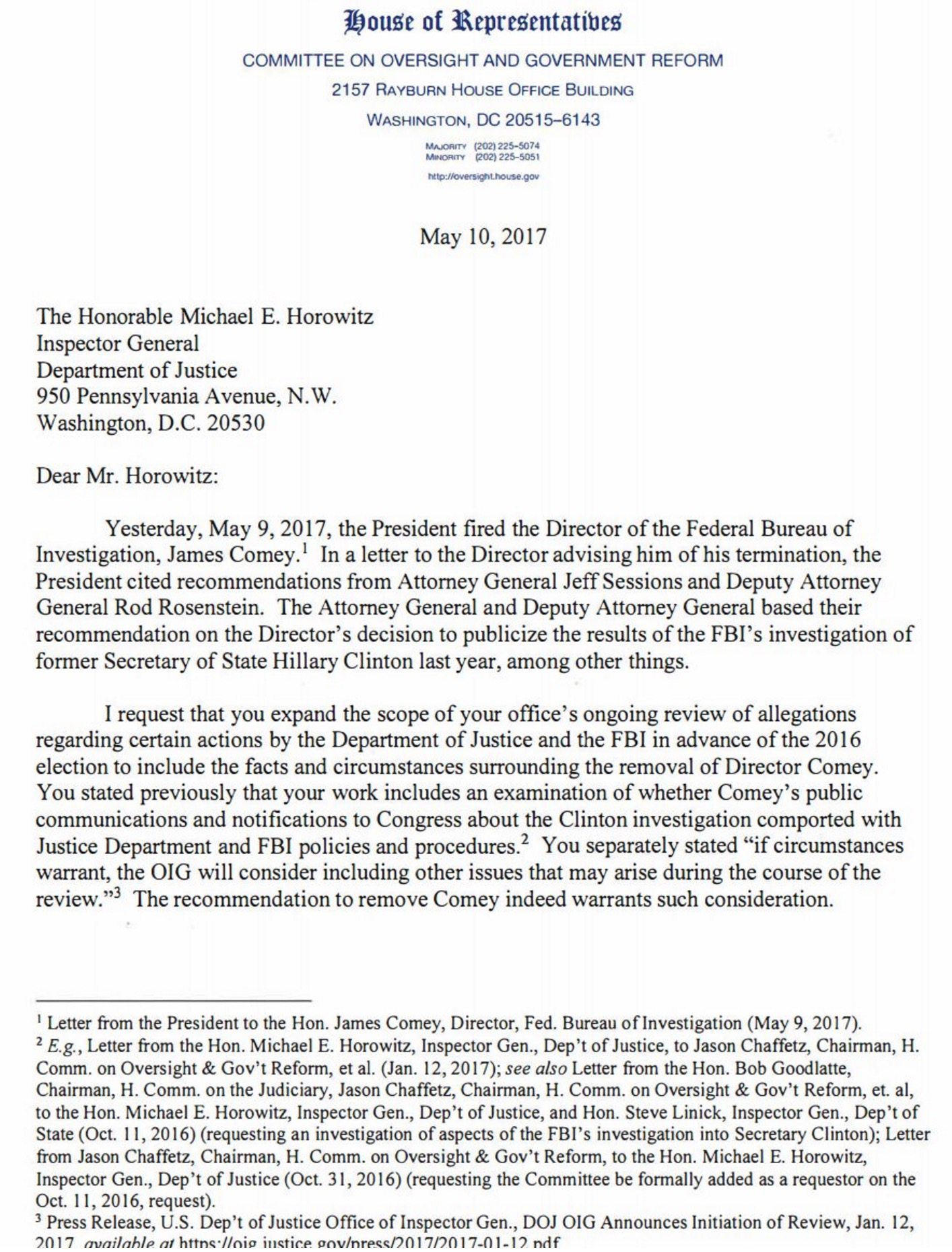 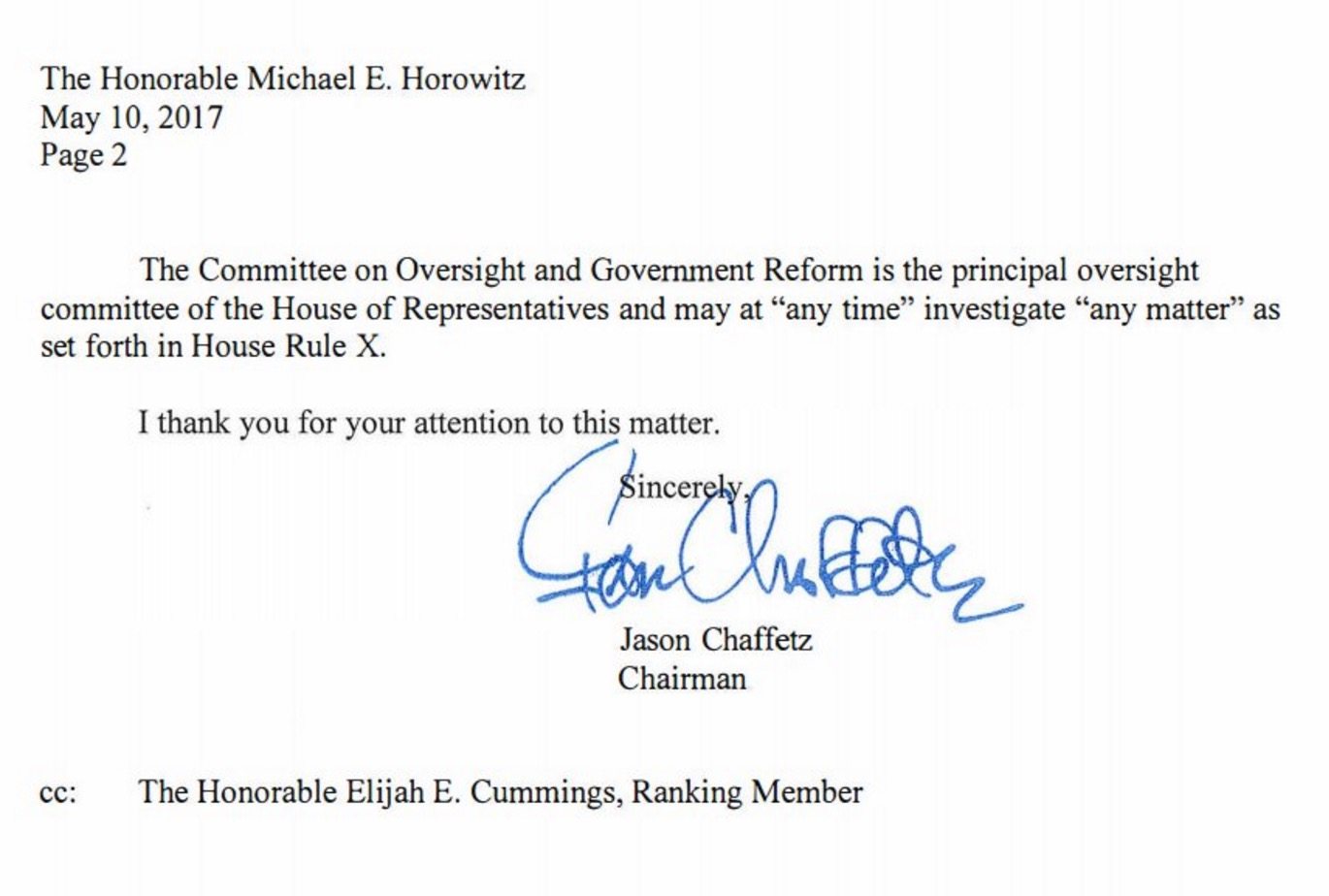 “Director Comey made a pretty startling revelation that he had essentially taken a stick of dynamite and thrown it into the Department of Justice by going around the chain of command,” Sanders said.

CNN has reported that sources claim Trump had grown increasingly agitated about the ongoing Russia probe, and was “white hot” angry at Comey for his testimony last week.

The New York Times has also reported that days before being fired, Director Comey had requested a significant increase in resources for the bureau’s investigation into Russia’s interference into the presidential election.

White House officials have said that a turning point came when Comey refused to preview his planned testimony to a Senate panel for top Trump aides.

Cryin' Chuck Schumer stated recently, "I do not have confidence in him (James Comey) any longer." Then acts so indignant. #draintheswamp

The Democrats have said some of the worst things about James Comey, including the fact that he should be fired, but now they play so sad!

James Comey will be replaced by someone who will do a far better job, bringing back the spirit and prestige of the FBI.

Comey lost the confidence of almost everyone in Washington, Republican and Democrat alike. When things calm down, they will be thanking me!

Senator Richard Blumenthal (D-Conn.) appeared on CNN stating that, “What we have now is really a looming constitutional crisis that is deadly serious.” Blumenthal has stated that Trump’s firing of Comey “may well produce impeachment hearings.”

Sen. Richard Blumenthal: "What we have now is really a looming constitutional crisis that is deadly serious." https://t.co/o4QERWlDFM

President Trump responded by attacking Sen. Blumenthal on Twitter, referring to him as “Ritchie” and raising the issue of his service in Vietnam.

Watching Senator Richard Blumenthal speak of Comey is a joke. "Richie" devised one of the greatest military frauds in U.S. history. For….

years, as a pol in Connecticut, Blumenthal would talk of his great bravery and conquests in Vietnam – except he was never there. When….

caught, he cried like a baby and begged for forgiveness…and now he is judge & jury. He should be the one who is investigated for his acts.

The Democrats should be ashamed. This is a disgrace!#DrainTheSwamp pic.twitter.com/UfbKEECm2V

According to the release, “The subpoena requests documents relevant to the Committee’s investigation into Russian interference with the 2016 election.  The Committee first requested these documents in an April 28, 2017 letter to Lieutenant General Flynn, but he declined, through counsel, to cooperate with the Committee’s request.”

Republican Sen. James Lankford, a member of the Senate intelligence committee, told Fox News Wednesday evening that the panel had “subpoenaed a large number of documents.”

The act of a president removing the head of the FBI is extremely unusual and has happened only once in U.S. history. In 1993, then-President Bill Clinton removed FBI director William Sessions from his office after he refused to step down in the wake of an ethics investigation.

According to the Guardian, former FBI agents said the abrupt firing of Director Comey was shocking and disturbing. One recently retired agent, who served for 26 years, said, “Although they [the White House] have said publicly that they’re trying to restore faith in the FBI and the integrity of its leadership, it is, by all appearances, just the opposite.”

CNN released a farewell letter from Comey today to fellow agents and friends:

According to the Federal Register, if an FBI director dies, resigns or is removed from office, the deputy director is named acting director. Until President Trump appoints, and the Senate approves, a new FBI director, Deputy Director Andrew McCabe will be acting director.

(CNN, THE NEW YORK TIMES, and THE GUARDIAN CONTRIBUTED TO THIS REPORT)