The Syrian Democratic Forces (SDF), a Kurdish and Arab militia coalition backed by the U.S., continue to advance through al Raqqa City, the official capital of the Islamic State’s self-proclaimed caliphate. Due to international political infighting as well as logistical issues the offensive on al Raqqa was delayed for months, providing the Islamic State time to prepare. Now, as the SDF is advancing on multiple fronts throughout the narrow streets and town squares of al Raqqa City, the price for every captured block is paid for in blood.

Estimates by observers indicate that the Islamic State has about 4,500 loyal fighters in reinforced positions, surrounded by some 160,000 civilians, throughout the city.

On June 8th, the SDF forces began establishing beachheads and forward operating bases (FOBs) towards several neighborhoods of al Raqqa. By using the beachheads, and FOBs, the SDF was able to breach the outer perimeter of the Islamic State’s stronghold. The SDF forces divided into two fronts, one advancing towards the former Syrian Arab Army division 17 military complex above al Raqqa, and the other one advancing towards al-Sabahia. By midday June 9th, the military base was secured. By that same evening, the western district of al-Sabahia had been largely secured. The Grain Silo area in the northern parts remains under enemy control, but has been isolated.

By the morning of June 10th, the two SDF units advanced on two separate fronts, attacking the North-West and Western flanks. Throughout the day the SDF forces fought a fierce street battle against the Islamic State’s reinforced positions. Al-Sabahia’s neighboring district to the north, al Romaniya, saw some of the fiercest battles of the day.

By dawn of June 11th, Islamic State’s positions in al-Romaniya fell, and their remaining positions in al-Sabahia were surrounded, sealing the Jihadists inside a controlled pocket of resistance. The tactic of isolating enemy positions and cutting them off from the advancing frontline has enabled the SDF fighters to advance faster, and by late June 11th they had reached the outer walls of the Old City, a neighborhood east of central Raqqa. The old city is believed to contain several reinforced Islamic State positions. These positions are likely to be well stocked with munitions and supplies that should last the Islamic State fighters for days of fierce fighting.

With the SDF controlling 70% of the industrial areas in the northern part of al Raqqa as of June 12th, the troops’ focus was to attempt to gain further control of the Old City district, which is densely populated by civilians. As a result, throughout June 12th intense clashes surged in the district. 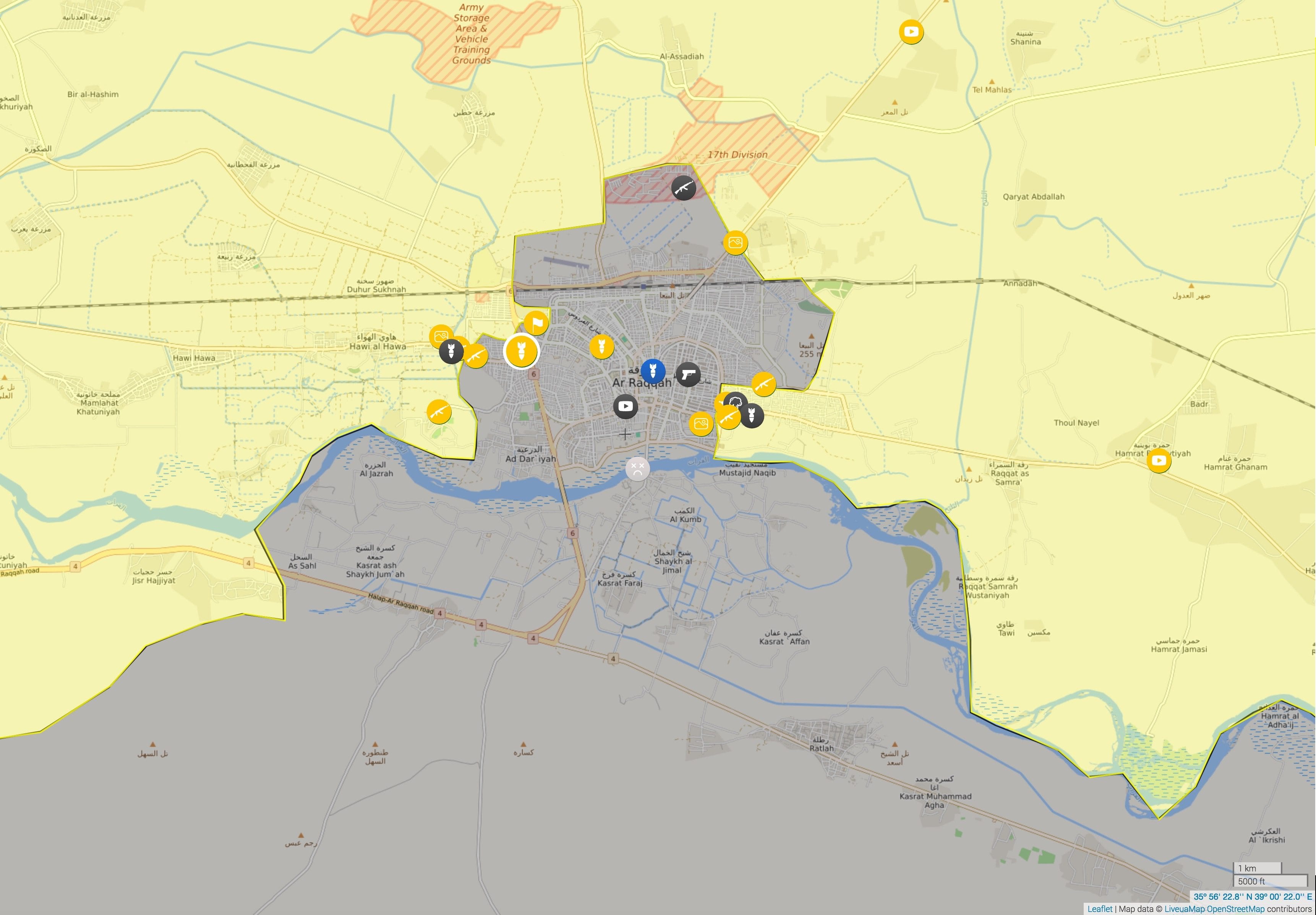 The Coalition has been providing continuous close air support throughout the offensive, striking ground targets ahead of the troops. On June 12th alone, coalition air forces struck 21 enemy positions and four armored vehicles in the Old District.  As a result of the air support provided, and the SDF troop advancements, the Old City is, as of June 13th, largely under control of the SDF.

Al Amaq agency, the de facto propaganda wing of the Islamic State, accused the coalition of utilizing white phosphorus (WP) against enemy combatants in densely civilian-populated areas during the battle for al Raqqa. Several videos and images circulating on social media show what is described as the US Air Force providing aerial support to advancing SDF ground forces; some videos and images show the use of munitions that appear very similar to WP.

The story was picked up early on by Chinese and Russian news outlets, and is now being covered by Western media. During the battle for Aleppo, Syrian and Russian Air Forces were accused of using WP against densely populated city centres. Similar allegations have been put forward by the Islamic State in the past, but as of yet there is no conclusive evidence. The US government acknowledges that the US Air Force units that are deployed in the battle against the Islamic State do have access to WP, but that the weaponry is not intended to be used against human targets.

While international law permits the use of WP in order to cover troop movements, it does not permit for the indiscriminate use against civilians and enemy combatants.

“Only a short distance away from the checkpoint the explosion happened." Terrified families are trying to flee Raqqa https://t.co/f8RxC1auD4

At this point, it remains unclear if the SAA intends to join forces with SDF against the Islamic State in Raqqa, or if the SDF rear lines have just been exposed to a third front.

As events continue to unfold on the al Raqqa frontline, Lima Charlie News will continue to cover the developments. 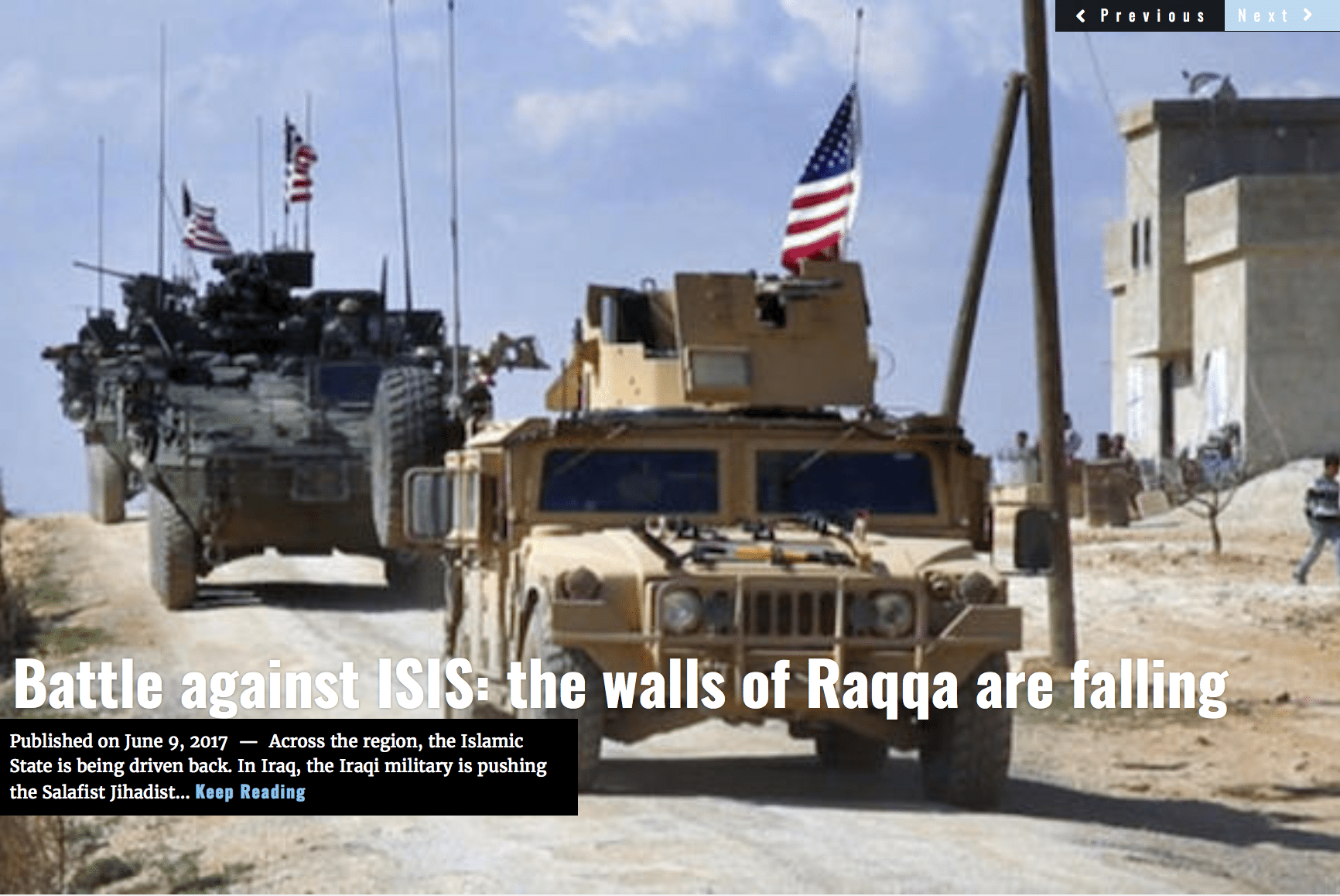