Unfortunately, in recent years, we tied the hands of our military in Afghanistan. And instead of trying to win we settle for just trying not to lose. Time and again, we saw troop withdrawals that seemed to have a lot more to do with American politics than conditions on the ground in Afghanistan. The fixation with the so-called quote, “force management levels” in Afghanistan as well as in Iraq and Syria seem far more about measuring troop levels than measuring success. Authorities were also tightly restricted.

One of my pet peeves is when someone comes up to me with a surprised expression and says something like, “Gail! Where have you been? I haven’t seen you in forever.” I know I’m overreacting, but the implication is since they haven’t seen me, I’ve disappeared. Duh!

I had a similar feeling as I watched coverage last week of the U.S. bombing of an Islamic State Khorasan (ISIS-K) complex in the Achin district, Nangarhar province, Afghanistan. The strike was part of counter terrorism operations that had begun in March, aimed at destroying ISIS in Afghanistan in 2017. Now we’ve been at war in Afghanistan for 15 years, and it took the dropping of the GBU-43, the largest non-nuclear bomb in the U.S. inventory, to get Afghanistan news coverage on the front page. With a catchy nickname like “Mother of All Bombs” the media had a field day.

5 key things you should know about the GBU-43/B, the most powerful non-nuclear weapon in America’s arsenal: https://t.co/1xhz1c9Afv #MOAB pic.twitter.com/ODlnfKwu1G

I understand many are scrambling to get some sense of the new administration’s national security views. I also understand that events like the U.S. cruise missile strike in Syria, followed by the first use of a weapon that’s been in the military’s inventory since around 2003 provide valuable insights. But since much has already been written on those topics, I thought it might be useful to put the event into some context and provide more background.

One of the lessons learned from that conflict was how difficult it is to destroy what are referred to as a hard deeply buried targets (HDBT). Former USAF Lt. Col. Eric M. Sepp, a current program manager on Northrop Grumman’s F series fighter program, said that during the Gulf War, “precision guided weapons held at risk virtually every above-ground building, including command and control facilities and hardened aircraft shelters. In response, rogue states have devoted considerable effort to constructing hardened, deeply buried facilities by converting existing caves and abandoned mines into bunkers, or constructing new facilities by tunneling deep underground.” As a result, military planners put in a lot of time and effort into how to take out targets like HDBTs. The development of the GBU-43 is one of the results of that effort.

General John W. Nicholson, commander, Resolute Support Mission and U.S. Forces Afghanistan pointed out that “the GBU-43 is designed to destroy caves and tunnels which ISIS-K have been using along with extensive belts of IEDs to thicken their positions against our offensive.” He stated that ISIS-K had been using tunnels and minefields to move around the battlefield and protect themselves from attacks from Afghan and U.S. forces. Gen. Nicholson decided to use the GBU-43 because it was “the right weapon against the right target.” He indicated that so far, the campaign has liberated over 400 square kilometers from ISIS-K.

What is our mission in Afghanistan? Weren’t we just fighting the Taliban and trying to keep Al-Qaeda from getting a stronghold there again?

Our main objective in Afghanistan is to prevent our country from being used as a – or prevent this country from being used as a safe haven for terrorists to attack the United States and our allies. We perform two complementary missions; the U.S. counter-terrorism mission Operation Freedom’s Sentinel and the NATO train, advise, and assist mission Operation Resolute Support.

Currently there are 8,400 U.S. troops and 5,000 coalition troops in Afghanistan. In order to illustrate what a challenging environment U.S., NATO, and Afghan forces have to operate in, Gen. Nicholson pointed out:

Of the 98 U.S. designated terrorist groups globally, 20 operate in the Afghanistan-Pakistan region along with three violent extremist organizations. This is the highest concentration of terrorist groups anywhere in the world, which underscores the importance of our counter-terrorism platform in the Central Asia-South Asia region which protects our homeland.

How are we doing?

General Nicholson says we are in a “stalemate.” In response to a question on whether he needed more troops, he said he had “adequate” resourcing in the counter-terrorism mission. However, “[i]n my train, advise and assist mission … we have a shortfall of a few thousand.” According to Gen. Nicholson, since this is in the NATO Train Advise Assist mission, it “can come from the U.S. and its allies.”

Geek that I am, I decided to dig a little deeper.

Congress has created a Special Inspector General for Afghanistan. They put out a detailed report every 3 months. Highlights from the most recent include:

After 15 years, Afghanistan still cannot support itself financially or functionally. Long-term financial assistance is required if the country is to survive:

In a January speech, John F. Sopko, Special Inspector General for Afghanistan Reconstruction, gave high praise to Afghan President Ghani and Chief Executive Abdullah, saying “both have been cooperative with the U.S. government and SIGAR’s efforts to prevent waste, fraud, and abuse of U.S. taxpayer money in Afghanistan.”

He went on to say:

But all is not positive. The most basic challenge that bedevils Afghanistan today is continued insecurity. For any country to function, it needs to do at least two things: (1) Provide for the security of its people; and (2) Pay for that security and the other non-security needs of its people. Right now, unfortunately, Afghanistan has problems doing both.

As for the capability of the Afghan Army, he states:

This is a reportedly 320,000 strong force, and it is basically playing whack-a-mole following the Taliban around Afghanistan. The DOD report reiterates this point by noting that the vast majority of the Afghan National Army has little offensive maneuverability, so the best spin the Afghan security forces can put on their activities is that they are able to re-take strategic areas after they temporarily fall. We may be defining success as the absence of failure. At a minimum, they’re playing defense and are not taking the fight to the Taliban. This is not for lack of brave Afghans. More than 5,000 Afghan security personnel were killed in action in the first eight months of 2016 alone.

During his Congressional testimony, General Nicholson, made a point of discussing the Afghan Special Forces:

As a result of our training, equipping, and partnering, the 17,000-strong Afghan Special Forces are the best in the region. They now operate independently on roughly 80 percent of their missions. The Afghan Air Force is also rapidly gaining capability. Their first ground attack aircraft entered the fight in April. And they’re now integrating intelligence surveillance and reconnaissance assets into their new targeting processes, so they’re are making great progress.

Corruption and poor leadership are also major problems. The Inspector General remarked that, “Afghan commanders often pocket the paychecks of ‘ghost soldiers’ for whom the U.S. is paying salaries. The number of ghost soldiers is significant, likely reaching into the tens of thousands.” 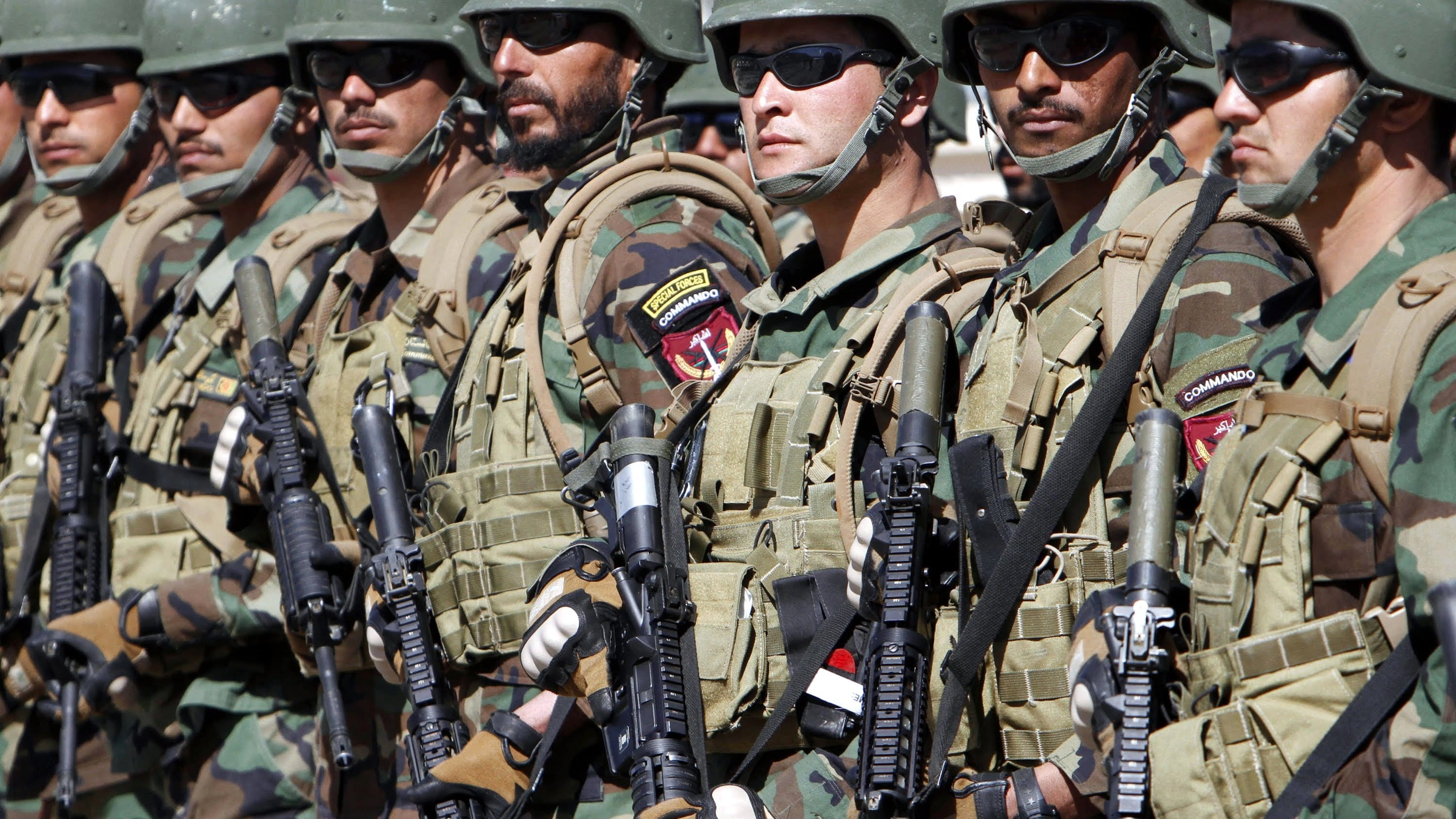 It’s been reported that the new administration is taking a very close look at Afghanistan. The President is attending a NATO meeting next month and I’m sure this will be a major topic.

Now this falls under the category “nobody asked me,” but I’ve got my own ideas on how to approach the worldwide terrorist threat.

In spite of the heavy criticism, President Obama and his security team had a very robust and well defined strategy. That strategy led to a broad coalition of nations working to defeat terrorists in multiple geographic regions. Yet the way the coalitions are currently organized and operate, has caused a variety of challenges to mission effectiveness due to issues like competing national interests, cultures, resources, policies and countries having different rules of engagement for using their military forces. Also, as stated in a November 2015 Congressional Research Service Report, “coalition participation tends to be fluid, with each country contributing capabilities that are commensurate with their own national interests and comparative advantage. Since August 2015, several coalition participants have changed the roles, missions, and capabilities of the military forces they are applying to counter the Islamic State.”

The Obama administrations’ strategy was also heavily dependent on partnering with and training host nation security forces. This has also presented challenges (remember how the U.S. trained Iraqi Army melted away when ISIS first challenged them), and might not be the best option if available ground forces capabilities require lengthy training before they can become effective operationally. Successes in the war against ISIS in Iraq and Syria show these obstacles can be overcome, but have added considerably to the timeliness and the difficulty of the task.

One possible solution is to build on these hard won successes and establish a new Global Military Terrorism Coalition (GMTC) with a primary mission of never again allowing Violent Extremist Organizations (VEOs) to gain control of a geographic region. The founding premise would include a premise similar to NATO’s Article 5: an attack by a terrorist group against one nation is an attack against all. The organization would be worldwide, with a standing multi-national rapid deployment force as well as an internationally manned and focused intelligence organization to support it.

Just my thoughts. More detail soon (unless I get diverted by the great Colorado weather and decide to spend a lot of time out riding my bike).