The French headed to the polls today in the first round of voting for the 2017 presidential election, seeking to narrow the field to two top candidates who will then participate in a runoff election on May 7. The uncertainty and antipathy that marked this election cycle, gave way to fear last week as the country’s terror issues come to the surface once more.

Three days before the election a gunman attacked a police van in the Champs-Elysées using an automatic weapon, killing one officer and wounding two others in an act of terror that was claimed by ISIS. In addition to the attack on Thursday night, on Wednesday two men were apprehended with bombs, submachine guns and ISIS paraphernalia, under suspicion of planning to launch attacks during the election.

As of this writing (5:12 p.m. ET), projected votes by France’s 47 million registered voters show Emmanuel Macron, an independent, at 23.8%, with Marine Le Pen, leader of the National Front party, right behind at 21.7%. 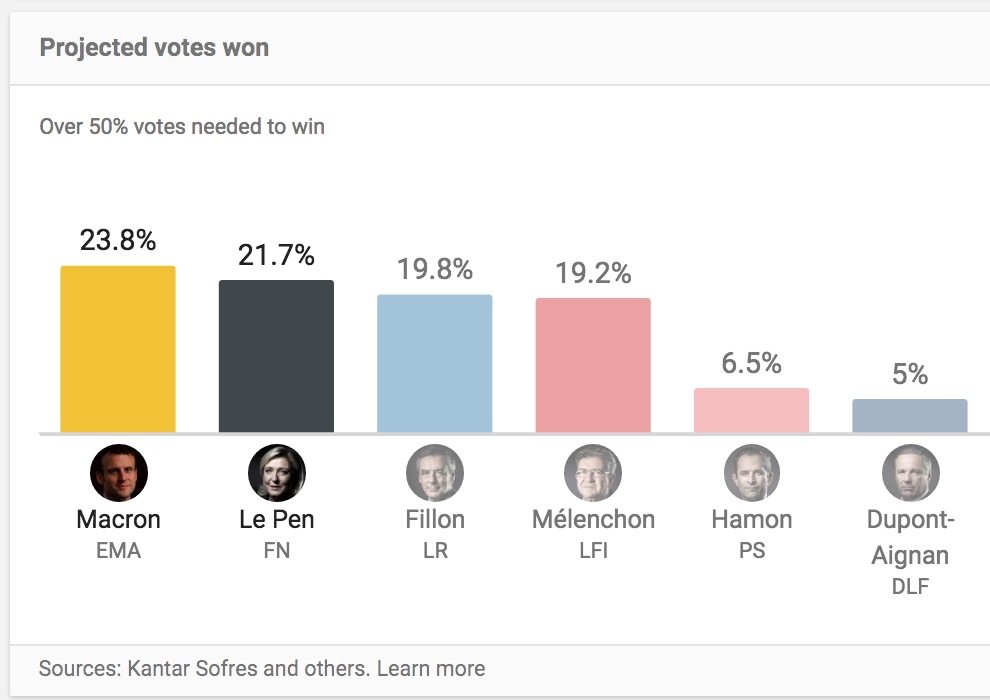 Emmanuel Macron, 39, an ex-banker who has never been elected to office, remained the front runner. Polling had suggested that he would have a slight edge on Marine Le Pen in this first round, but that he would have an easy victory against her in the second. He does have some experience in government, as he has served as Minister of Economy for president Hollande from 2014-2016. After he resigned, he formed his own centrist party, “En Marche!” (“On the Move”), Macron’s rhetoric is simultaneously pro-trade, and anti-inequality, and he has been harshly critical of anti-trade policies pushed by pro-Brexit politicians. He wants to deregulate France’s ailing industries and boost freedom of movement and trade.

This combination of populism and economic liberalism is seen as having taken a page from politicians like President Bill Clinton, and Prime Minister Tony Blair. Critics accuse him of having empty rhetoric. Marine Le Pen has accused him of taking “seven minutes to say absolutely nothing” during the first presidential TV debate.

Marine Le Pen is the leader of the National Front (FN), the French manifestation of the populist wave gripping the globe. She is the daughter of former FN leader Jean-Marie Le Pen, and she is seen as a champion of a relatively softened version of her father’s far-right views. She is considered anti-Islam, has called for stronger immigration laws, has a friendly relationship with Russia, and has challenged NATO.

On March 2nd, European Union legislators removed the EU parliamentary immunity of Le Pen over her tweeting images of ISIS violence. In December 2015, she tweeted images, including one of the beheading of American journalist James Foley. The lift of immunity follows a request from the French judiciary, and it grants the prosecutor the power to bring Le Pen in for police questioning. This investigation is in addition to another case involving alleged misuse of EU funds. The charges can carry a three year sentence and a fine of 75,000 Euros. She stated that the legal actions against her are politically motivated interference in the ongoing presidential campaign, and has called for a moratorium on the investigations until after the election.

Due to Le Pen’s often controversial comments, she draws much greater news coverage in comparison to her opponents. Some are calling this phenomenon the “Trump effect.” Shane Savitsky reports that the British press was 4.5 times more likely to mention Le Pen than her chief opponent, per an analysis of UK headlines by Buzzfeed News. Savitsky notes, citing a Washington Post report, that as a comparison, Trump got more than twice the amount of nightly news coverage that Hillary Clinton did. Political analysts have suggested that the the threat of terrorism strengthens the chances of Le Pen’s victory; something to keep in mind with this round of voting unfolding mere days after an attack in the heart of Paris. 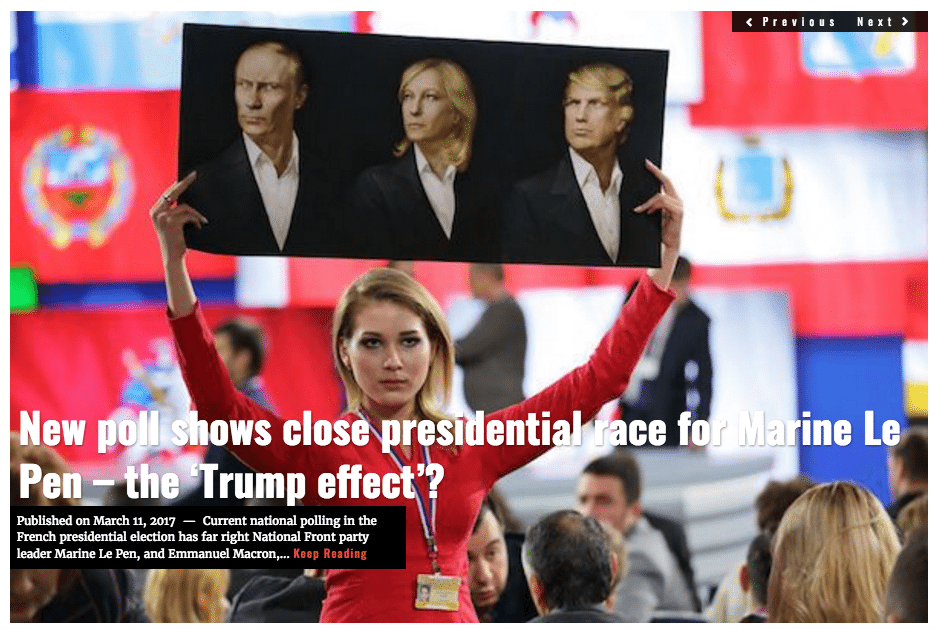 François Fillon (19.8%) and Jean-Luc Mélenchon (19.2%) trail in third and fourth place. Fillon is a traditional conservative, with strong backing from religious Catholics. He ran on a platform of cutting the number of people employed in the public sector, which is infamously bloated. Fillon started the campaign in the lead, but his campaign was derailed after he was accused of allocating public funds to pay his British wife, Penelope Fillon, just shy of a million euros to do a non-existent job as her husband’s parliamentary assistant.

Mélenchon, 63, an anti-capitalist firebrand, appealed to his communist backers calling for a nonviolent “citizens’ revolution,” meaning a constitutional overhaul to end France’s “monarchical” presidential system. Although he initially was polling very low, his performances in the debates caused his numbers to jump. A showman, he earned national attention when he accused a debate moderator of having the “modesty of a gazelle” for a failure to grill Le Pen or Fillon over their legal difficulties. Mélenchon promised to take aim at EU treaties and eliminate economic liberalism in trade. He pledged to pump €100 billion into green projects in order to get rid of nuclear power, and restore the retirement age to 60 and “move towards the 32-hour working week.” He proposed a 100% tax for anyone earning over €400,000 ($429,000) a year.

As the current president, François Hollande, leaves the stage, let us take stock of his term.

Assuming power in 2012 the president billed himself as a fresh start after the unpopularity of his predecessor, Nicolas Sarkozy. He promised to enact socialist policies of taxing the rich and to eliminate austerity from the political landscape. He promptly reneged on these promises. By 2014 he was publicly critical of the high tax rates and vowed to cut government expenditure. Having assumed office in the midst of the European financial crisis, he was faced with a tight budget, and flat growth. Even as the rest of Europe was starting to recover, French growth has hovered around half a percentage point.

There was one area where the president was consistent: military intervention. In the lead up to the 2012 french elections, Hollande was a supporter of military intervention in the Libyan civil war. This intervention was initiated by the French in a UN security council resolution to implement a “no fly zone” in the conflict area. During Hollande’s term, France intervened in Mali and the Central African Republic, both former colonies of the French Empire. Both interventions were to assist local forces in repressing Islamic militants. Advisory forces remain after victory declarations in each instance.

In January of 2015, the shooting attack on the satirical newspaper Charlie Hebdo indicated an uptick in terror activity that has persisted into this election cycle. After the 14 deaths in that incident, 137 died in coordinated bombing and shooting attacks on a cultural – entertainment district in Paris in November 2015.

In July 2016, 87 more died when a man in a truck plowed through crowds celebrating bastille day on the beach front promenade in Nice.

The impact of these attacks is starting to alter the nature of the French state. After the second attack to lead to mass casualties in November 2015, the National Assembly voted to enact a state of emergency. Since then, 3600 homes have been raided, with 6 of them leading to terror investigations, and around 500 firearms have been seized. The National Assembly has extended the state of emergency five times since then, with the latest extension coming in December 2016 with a vote of 288 to 32.

Because of the stale economic growth, terror and betrayal of his base, Mr. Hollande is leaving office with an approval rating of 4%. However, the seemingly irreparable damage to his political legacy has cleared the politics of France for a change.