“It is an abomination when any country tortures its own citizens,” said Rep. Smith, at a September 13th press conference on Capitol Hill. The human rights abuses, waged primarily against the Oromo and Amhara populations, have come to light despite Ethiopian authorities efforts preventing independent screeners from conducting transparent investigations.

The Resolution condemns the killing of peaceful protesters, the arrest and detention of students, journalists, and political leaders, and the stifling of political dissent under the guise of “counterterrorism.”

Ethiopia is a strategic ally of the United States. The country headquarters the 54 nation African Union, and, critical to U.S. interests, assists in counterterrorism efforts against al-Shabab, an Al-Qaeda aligned jihadi terrorist group based in Somalia. Ethiopia is also host to a staggering 750,000 refugees from the war torn region. 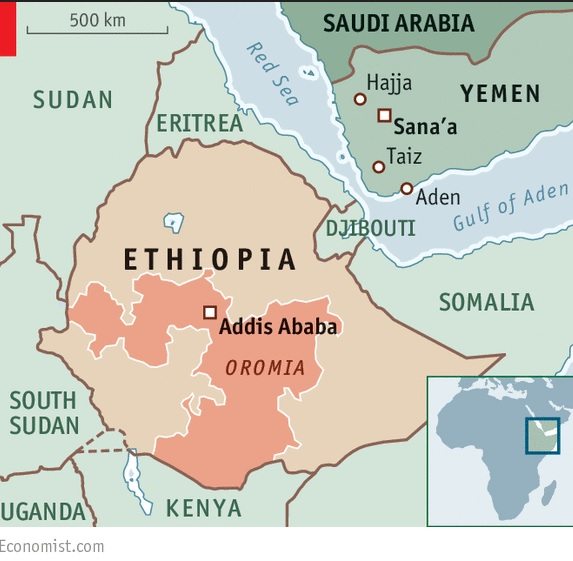 In a press statement Rep. Ellison said, “While Ethiopia is an important ally for the United States, continuing to let the Ethiopian government oppress its own people will only further destabilize the region. We must do all we can to ensure that the human rights of all Ethiopians are respected.” Rep. Smith added, “A valuable contributor to global peacekeeping missions, growing unrest in Ethiopia in reaction to human rights violations by the government threaten to destabilize a nation counted on to continue its role on the international scene”.

Resolutions, like the one proposed, tend to be more of an opinion that often do little in themselves because they lack the political leverage to prompt much action. They often fail to hold allied nations to a standard of conduct, as countries and international organizations are hesitant to regulate how other nations behave within their own borders.

The bill expressly calls on the government of Ethiopia to end the use of excessive force by security forces; hold security forces accountable after a full, credible, transparent investigation; release dissidents, activists, and journalists who have been imprisoned for exercising constitutional rights; respect freedom of assembly and freedom of the press; engage with citizens on development; allow the United Nations to conduct independent examinations; repeal certain proclamations limiting inclusive growth; and investigate shootings and a fire on September 3, that killed 23 people at a prison housing high-profile politicians.

Despite the good intention of the bill, critics highlight that it doesn’t go far enough. Henok Gabisa, a visiting Academic Fellow and faculty member at Washington and Lee University School of Law, stated in a personal interview:

“H.RES.861 is generally a good gesture from the United States Congress. It is very specific in a sense that it points out the consistent and constant patterns of corrosion of civil and economic liberties in the country. It also seems to give scrupulous attention to the marginalized groups who remain on the receiving end of the pain. That is really great. Nonetheless, owing to the mammoth financial aid transported to Ethiopian government by the U.S. under their bilateral security partnership, H. RES. 861 failed to deploy the political leverage of the [United States Government], and as a result it is nowhere nearer to fulfilling the goal it promises. In fact, Resolutions by merit are just declaratory statements or positions of a government. They may not be considered law in a positivist school of law. Yet again, H.RES.861 has no teeth to bite those who fail to comply the soft obligations it enumerated under the last sections 3-6.”

Experts give the bill a 32% chance of getting past the Foreign Affairs Committee and a 29% chance of being agreed to completely. Comparatively, from 2013-2015, 46% of simple resolutions made it past committee.

In a country of over 86 million, Oromos and Amharas constitute the two largest ethnic groups, combining for over 61% of the population. Yet, they are the most politically marginalized and economically disenfranchised. In 2015 Ethiopia’s ruling party, the Ethiopian People’s Revolutionary Democratic Front, won every seat in parliament despite little ethnic diversity. The EPRDF has remained in power since the overthrow of Ethiopia’s military government in 1991.