Lima Charlie News celebrates Memorial Day as a day of remembrance, a true dedication to our men and women in uniform, their families at home, and all those who have given their lives for our great nation.

Tens of thousands dead. Millions liberated. A price paid with the lives of American fighting men and women. America’s military history is a study in valor and sacrifice. Throughout our nation’s history, the American soldier has bled into many a foreign soil to the battle cry of freedom. When our soldiers go to war, all they ask is enough land to bury our fallen.

“Far from being the Great Satan, I would say that we are the Great Protector. We have sent men and women from the armed forces of the United States to other parts of the world throughout the past century to put down oppression. We defeated Fascism. We defeated Communism. We saved Europe in World War I and World War II. We were willing to do it, glad to do it. We went to Korea. We went to Vietnam. All in the interest of preserving the rights of people. And when all those conflicts were over, what did we do? Did we stay and conquer? Did we say, “Okay, we defeated Germany. Now Germany belongs to us? We defeated Japan, so Japan belongs to us”? No. What did we do? We built them up. We gave them democratic systems which they have embraced totally to their soul. And did we ask for any land? No, the only land we ever asked for was enough land to bury our dead. And that is the kind of nation we are.”

Memorial Day means a great many things to Americans. It’s the traditional signal that summer has arrived, the leading indicator that propane sales are about to take off, and a miner’s canary for the “suns-out, guns-out” phase of the calendar. It’s a nominal reminder to the average American that honoring fallen veterans from wars past is a good thing to pay attention to, at least on Facebook before 10am. 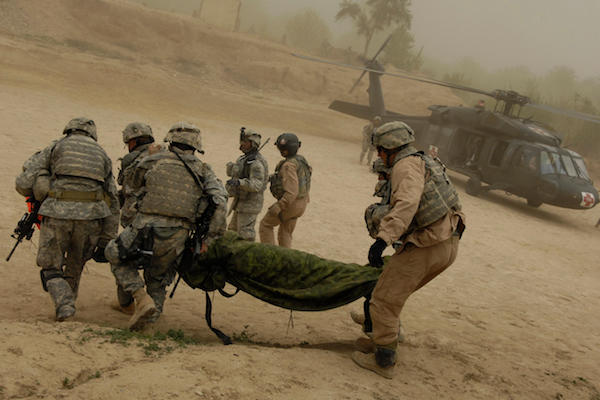 However, there is a greater meaning for Memorial Day that even most veterans themselves don’t see immediately, and it involves first understanding the history of one of America’s most appropriated holidays.

Here, in the dread tribunal of last resort, valor contended against valor. Here brave men struggled and died for the right as God gave them to see the right.

In the years following the Civil War, the United States was seeking national solace. The Civil War resulted in the greatest number of deaths of Americans, a figure that still stands today due to obvious army composition facts. Roughly 2% of the population had been left dead in the war’s aftermath.

In response to this solace, local towns held springtime tributes and parades in memory of the countless fallen soldiers. The tributes quickly became part of America’s traditional character. As it was always held towards the end of May, it also became an unofficial symbol of the beginning of summer.

Originally called Decoration Day, it was introduced in 1868 by General John A. Logan, the leader of the Northern Civil War Veterans foundation, as an expression of gratitude towards the fallen. By the late 1800s, the day had gradually become known as ‘Memorial Day’. In the aftermath of World War I, Memorial Day evolved to include fallen American military personnel from all wars.

While General Logan intended the day to always be celebrated on May 30th, Congress passed the Uniform Monday Holiday Act in 1968, stating that Memorial Day is always to be held on the last Monday in May. The law also declared Memorial Day a federal holiday, thus creating a three-day weekend for federal employees, going into effect in 1971.

The Uniform Monday Holiday Act was introduced in no small part as a response to the perceived counter-patriotic tendencies in the new-left and anti-war movements in the wake of the ongoing Vietnam war. Already, the specter of returning veterans had proven what dire consequences there were in not honoring a nation’s warriors.

Many will celebrate by visiting cemeteries or memorials or participating in parades in addition to a barbeque and the beach. We thank the fallen for their ultimate sacrifice, along with the will and courage they displayed by walking towards the battle while others fled from it.

We thank them, by remembering.

Part of that remembering is understanding the circumstances of the most hallowed battles in American military history. In an era where empirical facts are disputable and less than one percent of the population of this country has served in the armed forces during the Global War on Terror, understanding why we honor the memories of our fallen is entwined with why we join, why we serve, and why we fight.

Amidst your own celebrations on this day, please allow some time for reflection on your understanding of the sacrifices made by those that filled America with a greatness we are still enjoying.

[John Sjoholm and Michael Gardner also contributed to this article]

Excerpts from an early draft: (via John Sjoholm)

On 27th of November, 1950, a 30,000 men strong force of American and British troops deployed to the Chosin Reservoir, a frozen man-made lake high in the Hamgyong mountains, as part of the UN mandate. The hope was that this deployment would result in the North Korean military crumbling, and that the war would be over before Christmas. Instead the UN force found themselves surrounded by 8 Chinese divisions, numbering 80,000 men. With no logistics coming in, and with the ice cold winds blowing at 60 knots, the situation was deemed problematic.

“Don’t forget that you’re First Marines! Not all the Communists in hell can overrun you!”
– USMC Lt. Gen. Chesty Puller, at Chosin Reservoir, 1950.

For 17-days the battle of Chosin Reservoir raged, with the UN forces attempting to break through the Chinese lines. Those that survived would tell stories of how it was nearly impossible to stay warm, and that wounded could not be evacuated. Many wounded froze to death. If you were severely wounded, you were considered as good as dead. The Chinese forces would attack during the cover of the night, and during the day they would shell the American-British positions.

One exposed position, consisting of no more than 50 troops, held off the enemy despite 9:1 odds against them. After 5 days of constant attacks, only a handful of men remained at the embattled position. On the 5th day, the Chinese breached the position, and the Marines were forced to fight them using their trench tools and sidearms. When ammunition ran out, they used their sidearms as clubs.

On the 6th of December, the troops managed to break the enemy lines. To prevent the UN forces from retreating, the Chinese blew up a bridge over a 4,000 foot deep valley, forcing the US to airdrop a whole replacement bridge. A feat never before attempted. Combat engineers installed the bridge under intense, often close, enemy fire.

Despite frequent ambushes, artillery shelling, and transporting over 4,500 wounded, the troops made it to the port of Hungnam, where they would be evacuated along with other UN troops. As the Chinese advanced throughout North Korea, the UN was forced to evacuate all of its troops back to the 38th parallel. A 193-ship armada was quickly assembled, and the port of Hungnam was used as the main staging ground for the evacuation. One ship alone, the SS Meredith Victory, carried 14,000 Korean refugees away from the frontline towards the South.

Cannon to right of them, Cannon to left of them,
Cannon in front of them Volley’d & thunder’d;
Storm’d at with shot and shell,
Boldly they rode and well,
Into the jaws of Death,
Into the mouth of Hell

Up to the call we stand.