Lima Charlie News is LIVE in Philadelphia, bringing you the latest coverage of #DNC2016

Today, at the fittingly named Thomas Paine Plaza, rallies turned to protests erupted from all positions of the political spectrum. Protestors voiced outrage and disenchantment with the political system and the DNC, showing visible exhaustion from both politics-as-usual and the intense summer heat. Bernie Or Bust Movement supporters, Black Lives Matter protesters, and Green Party followers seemingly supported disparate platforms but—at the root—shared an overall disillusionment with the political, economic, and social status quo. 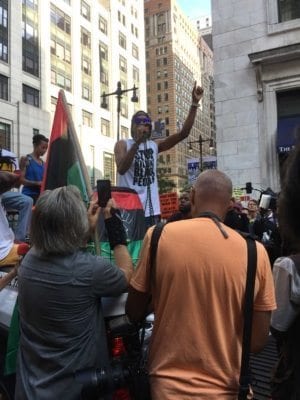 At a speech delivered by a Green Party-Jill Stein supporter, the speaker reminded the crowd, “Thomas Paine said we have it in our power to begin the world over again. We’re going to do that with the Green Party. We will defeat Hillary Clinton and Donald Trump and make Jill Stein the next President of the United States. In other words, it’s going to be Bernie or Bust.”

Nearby, at a Black Lives Matter Protest, one of the first elected officials to endorse Vermont Senator Bernie Sanders cautioned onlookers, with the impending Clinton nomination ahead, “Look at your watches. I need you to understand something. This is a numbers game. We have to vote Blue in November. Blue no matter who.”

Adjacent to the Hillary supporters, shouts of “Vote Green” rang out as Green Party members stood by their rallying cry, “Jill Not Hill.”

At yet another Black Lives Matter protest, fervent calls of “No Clinton, No KKK, No Wall Street USA,” provide the backdrop for demonstrators carrying signs urging, “Fund Jobs, Schools, Hospitals, Not War in Syria” “No Racism, No Poverty, No War, No to Both Parties,” and “The People United Will Never Be Defeated.”

In the midst of much anger and anti-police rhetoric, one young boy reminded us that “Blue Lives Matter.” Confronted by members of the opposing camp, he stood his ground, donning a “Together. Baton Rouge” sticker, before a line of Philadelphia policeman—assigned to keep the peace under the blazing sun outside City Hall and allowing protestors to voice their opinions. 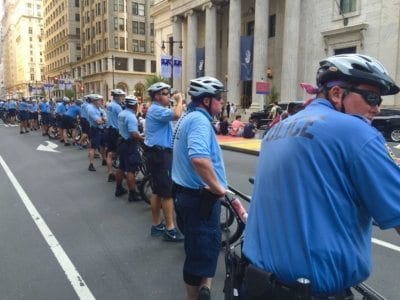 Close by, against the backdrop of a Democracy Spring canvas sign, with cries to “Shut the DNC Down,” Presumptive Green Party Nominee for President, Jill Stein, reminded her supporters of why they gathered in the Philly plaza in the first place:

“American exceptionalism is that we are a diverse nation—from all corners of the world we come together and affirm our common humanity. We are a movement that lifts up that common humanity with so many solutions. When people tell you that we can never make a difference, that we don’t count in this discussion, well Bernie showed them the truth about that.

The Bernie or Bust agenda is the American agenda. The Agenda of a human family and for the whole world. We do have the power. One of the ways is by our promise—by our first act when we turn the White House into a Green House. The very first thing I will do if I have the honor to serve is to do for a generation of young people what the profiteers and political pundits already did for the crooks on Wall Street—we will do away with student debt. We will make public higher education free along with healthcare and a welcoming path of citizenship for the immigrants who are the core of our community, our economy, our culture.

Where did Donald Trump come from? The economic misery. And not just him, virtually all of the Presidential Republican candidates and some Democrats, and all over Europe we see this right-wing extremism. It is a response to Clinton policies like NAFTA, like deregulating Wall Street. The most powerful thing we can do to right-wing extremism is to unify behind our agenda for a truly radical progressive agenda for people, planet, and peace over profit. Stand up to the propaganda and tell the truth.

I will end by saying this is not the end—this is just the beginning. We are family. We are together with the power that is unimaginable. We are the ones we have been waiting for. Let’s make it happen.”

Nearby, as The Philly Coalition for REAL Justice banded together with protestors—shouts of “Smash the State!” and “On The Move!” complemented one another, as cries of “Tell ‘em we ain’t leavin’ we came to claim freedom” and “This one’s for Eric Garner” rang out.

Pam Africa—head of International Concerned Friends and Family of Mumia Abu-Jamal—a movement that sought justice for the imprisoned journalist, convicted of murder, and sentenced to death—took to the Plaza stage to say, “What we’re doing here today we must take back to our cities to do. These people have poisoned our water, our air, our soul. We come together as one fist with the understanding that the system must be shot down. Free all the people.”

Nearby, another protester shouted, “The problem in this country is the state! Smash the state. It is the police, the sheriff’s department, the CIA, the FBI, the courts the prosecutors, the judges, the parole officers. Every institution that makes money off of black and brown bodies being incarcerated. The private prison system is no different from the Convict Lease System. The police today are no different than the slave patrol on the plantation.” Turning to his left and right, he added, “Look around you, this is what democracy really looks like. When you have the black, the brown, the red, the Latino, the Trans, the Straight, the Muslim, the Christian, the young, the old—that’s what democracy looks like. And this is what absolutely petrifies this country. They do not want to see the oppressed come together united. Voting for Hillary and Trump is voting for oppression.”

The same protestor finished on a message of hope, urging those of the black community, “Teach our black history to our children. Do not wait until they are 30 years old. Teach them about Nat Turner and Harriet Tubman and Ida B. Wells and Malcolm X, so that they grow up strong and love each and keep each other inspired. Sisters and brothers, this movement is not built off of hate but must be of love of our communities. You don’t defeat racism with racism, you defeat racism with solidarity.”

Another rally-goer spoke not on the platform of a stage, but through the conduit of a red, white, and blue coffin, with “DNC” written across the top. “Democracy is dead,” he murmured. 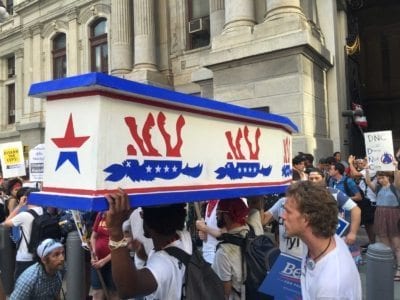 While tempers flared outside the Wells Fargo Arena, on the floor of the Democratic Convention, a very different American populous was on display. Shortly after 6:30 PM, Hillary Clinton became the first female nominee in history of a major US Political Party. More than nine years after launching her first presidential bid, as the South Carolina delegation cast 13 votes for Bernie Sanders and 46 votes for Hillary Clinton, the former First Lady was officially put over the top for the Democratic Nomination. Former rival Vermont Senator Bernie Sanders helped make the nomination official by suspending the rules on the DNC floor when the roll call reached his home state, Vermont, a key demonstration of unity within a party at internal odds:

“I move that Hillary Clinton be selected as the nominee of the Democratic Party for President of the United States,” the Vermont Senator announced, asking that a vote of acclamation be taken. The display of unity drew a striking parallel with Clinton’s decision 8 years ago, to take to the microphone of the Dallas convention floor and make the nomination of Barack Obama official.

But the coalescence inside the arena could not withstand the outrage and zeal of protestors outside. Just moments after Clinton claimed the nomination, lyrics of “We are in this together” rang out amongst demonstrators who never really stopped protesting outside the Wells Fargo Arena.

As the DNC progresses over the next two days, Lima Charlie will continue to bring you the latest coverage on the #DemConvention in Philadelphia.